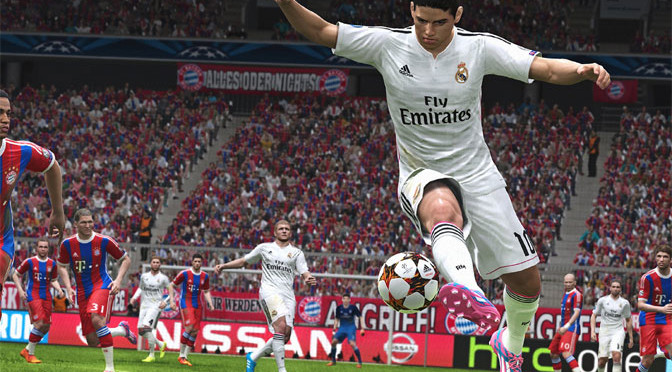 Reviewer’s Note: I’ve used the term soccer throughout this review. The game is properly called football. You play it with your feet and a ball. The American version of the game would more appropriately be called “hand-egg.” And yes, I’m American.

The last decade hasn’t been kind to Konami’s Pro Evolution Soccer (PES) series. Once known as the purest soccer experience a gamer could find, the franchise suffered setback after setback when it made the jump to the Xbox 360 and Playstation 3 consoles. All the while, EA Sport’s FIFA has been an evolving, ever-improving soccer experience. With last year’s FIFA 14 approaching a level of near perfection and no entry on the next gen consoles from Konami, it looked like the once great PES had said its sad good-byes and would fade into a melancholy sunset.

But, to steal a phrase the British are rather fond of, “Football’s a funny old game.” Inexplicably, FIFA 15’s release saw the game make slight, albeit significant, changes to the game’s physics engine that created a somewhat disjointed, choppy experience. And like any great athlete just waiting for a chance, PES pounced, rekindling the old magic and coming up with the year’s best soccer experience.

PES 2015’s standout feature is its superb passing game. Every pass feels sharp, crisp and lively. As has traditionally been the case with PES, the game caters to hardcore fans, and there’s a slight learning curve to figuring out the game’s passing mechanics.

Body position, power and angle can all play a dramatic role in determining whether a ball makes it to its target or goes wayward. Once players familiarize themselves with the system, it becomes second nature, and the reward of seeing a string of passes carve apart a defense is among the most satisfying I’ve ever experienced playing a sports game.

When a move does break down – and that happens often in soccer – there’s something frustratingly beautiful about it: It’s your fault. Unlike FIFA 15, which touts its incorporation of soccer’s random nature, there’s nothing random about PES. Play well, and you’ll reap the rewards. Try and force play, however, and you’ll find yourself scrambling back into a defensive shell.

Because of that, PES is a tactician’s dream. One of the key reasons the passing system works so well is the staggeringly brilliant AI. Computer-controlled teammates seemingly known exactly what players are thinking, positioning themselves in just the right spot to receive the next pass in a sequence. More than that, they’re intelligent enough to provide multiple options to the person on the ball.

That doesn’t mean tearing apart defenses is easy, though, as the defensive AI is equally competent. The result is a majestic ballet of constantly shifting players, always vying to get into the best position possible – just like real soccer.

The ever-moving parts require a constant attention to what’s happening on and off the ball, but PES makes the system work well through strong one-on-one dribbling. No, a player can’t slalom through a midfield full of defenders on a whim, but it’s possible to buy extra time by shielding the ball and creating a yard of breathing space to reassess your options.

That said, the game also encourages quick ball movement and an aggressive, attacking style. Shots from distance, when struck with the right balance of power and finesse, cut through the air like arrows, sending keepers scrambling. Again, the AI has a counter for this, and defenders are quick to close down potential goalscorers and block their shots.

Visually, PES looks better than ever, fully taking advantage of the next gen hardware. The age-old issue of licensing does rear its ugly head, however. The only licensed English Premier League team is Manchester United, with all of the others featuring fictitious names, crests and stadiums. And although there aren’t swathes of different leagues to choose from that FIFA has, the notable exceptions are the Champions and Europa leagues.

To compensate for the missing licenses, PES’s excellent editor mode is still present, and for the ambitious, it allows you to alter almost anything in the game.

PES strikes pay dirt in the audio department this year too. Stadiums come to life with chants and a genuinely raucous environment. Every thump of the ball and rattling of the woodwork resonates beautifully, enhancing the game’s realism. The excellent soundtrack also makes sifting through the highly detailed tactical menus even more enjoyable for die-hard soccer fanatics.

In all, Pro Evolution Soccer 2015 is a paradise for hardcore soccer fans. It blends together sharp passing mechanics, brilliant AI and a sea of tactical options. If you’re a fan of the beautiful game, or a PES fan that’s drifted away from the series, this is the game you’ve been waiting for.

Pro Evolution Soccer 2015 earns 4.5 GiN Gems out of 5 for bringing the purest soccer experience back into the limelight.