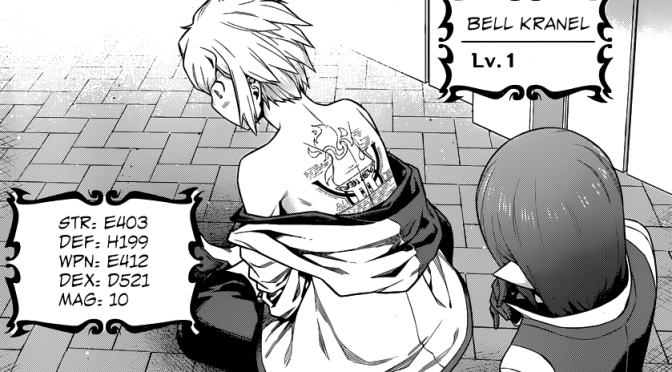 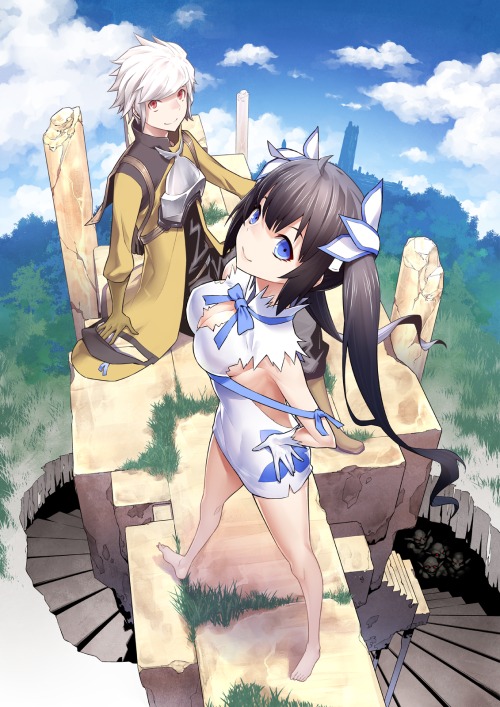 This week for Light Novel Thursday I’m delivering on the promise of reviewing Dungeon ni Deai wo Motomeru no wa Machigatteiru Darou ka, or Is It Wrong to Try to Pick Up Girls in a Dungeon? in English, by Fujino Ōmori. Most people just call it Danmachi though! Anyways on to the review!

Plot Synopsis: The huge labyrinth city, Orario, is the gateway to the huge underground maze commonly known as the “Dungeon”. Its strange name causes excitement, a place to gain honour, and maybe even a romance with a pretty girl. A place where people hold their breath, hoping to gain all they wish for, a place where a solitary young man meets a little “god”.

“Alright, Bell-kun, follow me! It’s time for the “Familia” initiation rite to happen!”
“Yes! I’m going to get stronger!”

The fated meeting of a boy who wants to become an adventurer, and the failed god who doesn’t even have a single follower.

This boy’s journey as written by the goddess, “Family’s Legend” (Familia’s Myth)

Plot: As you can probably guess the reason Bell wants to become stronger is to encounter girls in the Dungeon, and becoming stronger isn’t a bad perk of trying to do that. The plot isn’t super serious, unlike Sword Art Online or Mahouka Koukou no Rettousei. That being said it has it’s tense moments and overall it’s just a fun read in terms of plot.

Characters: Bell and Hestia are two of my favorite characters, Bell because of his earnestness and Hestia for her obvious love of Bell. That being said Bell is an idiot and doesn’t realize how many women he’s got chasing after him, while he chases after Aiz Wallenstein. The cast is great and Hestia isn’t the only familiar god you might notice in this story, people like Loki and Hephastus show up as well.

Art: The art is great, and makes me super excited for the Anime Adaptation!

Overall: Well worth reading, even if Fantasy isn’t your thing.

One thought on “Light Novel Thursday: Danmachi by Fujino Ōmori”