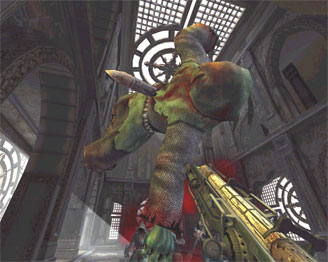 Did I ever mention how I didn’t like shooters much? It’s not that I don’t appreciate the effort people put into making them, or that I don’t recognize their impact on the history of video games, or any of that. The truth is – I suck at them.

So, you can imagine my surprise when I saw myself gawking slack-jawed at the demo of Painkiller at last year’s E3. The rendering and physics of the 3D environment was simply awesome, and, before I could stop myself, I was asking my editor to be the one to review it.

‘Nooo!’ I could hear a little voice inside me cry. ‘You are a puzzle-gamer, a laid back turn-based strategizer, not built for the rigors of a first-person shooter. You’ll break up in the atmosphere for sure!’

But I resolved not to listen, and when I finally got my hands on a copy, I was glad I stuck to my guns, so to speak. This game is simply awesome.

The back story is more interesting than your typical shooter back story. The opening movie shows how you and your wife/girlfriend get killed in a car accident, and, while she goes straight to Heaven, you are kept in some kind of Limbo for quite some time. Then an angel finally comes to you and tells you that the forces of Lucifer are moving toward another war, and you are the only one that can stop him and his generals. If you do well enough, you can go to Heaven to be with the girl.

You are then thrown into the mix, fighting undead, evil spirits, and the occasional ninja, armed with an array of interesting weapons. Each weapon also has an alternate fire weapon attached to it, like the freeze canisters attached to the ubiquitous shotgun.

This game probably has the coolest ‘begin-the-game, unlimited-fire’ weapon of any shooter I’ve seen – the titular Painkiller. Its primary weapon is a set of these whirling blades that will keep going as long as you hold down the mouse button. That’s the Pain. The Killer is a device that shoots out and sticks to a wall, creating a beam between you and it, which will quickly kill almost any baddy that moves into it. If this is what they give you at the beginning, you can imagine what the other weapons are going to be like.

Like most shooters, you have health and armor ratings, and ammo for the weapons to keep track of. Health is restored to 100 at certain save points, or you can recover one at a time by sucking up the souls that dead bad guys leave behind. It’s weird to me to have the main character survive by consuming the souls of all these Hellspawn, but hey, I was never that picky an eater, so what the"heck.

One mark of how cool this game is would be the fact that I learned how to play shooters with the mouse. That’s right people, I am no longer a lame-ass keyboarder, so watch out! Once I got used to the controls, I found them way easy to use. Let me just say that using the mouse scroll wheel to switch out weapons rocks!

The physics engines are really well put together, which is mostly a good thing. Larger projectiles drop faster. When something explodes, bits go off in different directions, so each time the actual environment changes differently than the time before. These are all good things. The only problem with this increased versatility is that everything that is capable of moving is also pretty easy to move. For instance, if a big stone column falls over and hits the ground, you can probably go over and move it just by jumping onto it. It makes things a bit unrealistic, but those instances are rare, so they don’t detract from the game too much.

Now we come to the best part of the game, the graphics and sound. The sound in this game ranges from the disgusting squelching of a stake going into an enemy, to the totally realistic explosion sounds, to the grunts, squeals and roars that the various creatures make. And all of these are just right to add to the game experience. The music is great – you have the level music which suits the specific environment just perfectly, and this is interrupted by a hard-driving metal riff whenever there is a combat. When that happens, it can really scare the bejeezus out of you if you don’t immediately see any foes.

The scenery in this game is magnificent, and is the one thing that drew me to it in the first place. Each level is beautifully rendered and each surface seems to have its own unique texture. Ruins are ruined just so, and backlighting is used to extremely frightening effect. Damn this game, it’s too easy to get distracted by the fabulous scenery and get killed buy some monster or other. But that’s okay, because you can start from the last save and see all that great background again.

Painkiller is an amazing piece of work. It made a guy like me, who detests shooter games, fall in love with it, and spend countless hours playing it. It fully deserves the near-perfect 5-gem rating it gets from me.