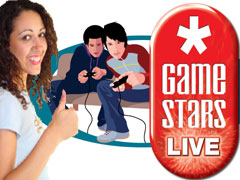 Those of you who are regular readers of my column will know that every September I head to ECTS, London's less glamorous, oft maligned attempt at E3. The very loyal will have read many of my reports from ECTS and noted an increasing air of disappointment and disillusionment at the state of E3's ugly, little sister.

Every year the industry tolls the death knell for ECTS and every year it comes back again, looking more like a corporate cadaver than ever. We all dutifully shuffle round the empty halls and head to the bar to moan about the state of things into our over-priced beer.

Something needed to be done and something, my dear playmates, has been done. ELSPA (Entertainment and Leisure Software Publishers Association) the trade body and the collective identity for the computer and video games industry in the UK, is forging full steam ahead with the development of its own London based games industry trade show – EGN (European Games Network). Planned for the exact same week as what was previously London's only games conference, this threw a few cats amongst the flailing pigeon that is ECTS.

It was baffling to think that maybe the original London trade show's days were well and truly numbered. So with an industry divided between two shows on the same days and the prospect of time consuming journeys across London, I needed answers. So I got in touch with ELSPA and spoke to Roger Bennett, director general of ELSPA.

GIN: Why has ELSPA set up its own show, rather than supporting ECTS?

Bennett: EGN is owned by the members of ELSPA and is designed and structured in such a way that it meets their needs and that of the industry as a whole. For many years, ELSPA and its members fully supported ECTS. However, as the show began to decline and lose international appeal, it was no longer as beneficial to our members and the industry. Therefore, ELSPA was asked to step in and revive an international gaming industry trade show in London by establishing an event that has broad support from both publishers and developers.

Over the last year we have done that and now have strong support from leading game companies including EA, Vivendi Universal Games, UbiSoft and many others.

We are very excited to have this new event and only regret that we have not taken ownership of our own destiny as an industry sooner, as ESA (IDSA) did many years ago in USA with E3. With the launch of EGN, Europe's interactive entertainment industry essentially owns the trade show assets and profits will be re-invested to the benefit of our members.

GIN: What does EGN have to offer that ECTS doesn’t?

Bennett: EGN was developed to complement E3 and has been structured to maximize the effectiveness of holding an international business-to-business gaming event in Europe. E3 is held in the States each spring and by design EGN will be held in Europe each fall. EGN will combine its comprehensive educational programs, seminars and technology demonstrations with Game Stars Live and The European Developers’ Forum.

Game Stars Live is London's only multi-format consumer event, while the European Developer's Forum boasts a solid line-up of keynote speakers such as Warren Spector, Jeff Briggs Ray Musyka, and Karl Jeffreys. Each of these events is being held in the same facility and companies who exhibit or attend EGN automatically receive complimentary passes to Game Stars Live and the European Developers' Forum.

Another unique service that sets EGN apart from other trade shows is the Meeting Planner, a sophisticated Internet-based schedule facilitator. This program allows high-level attendees to pre-schedule their important meetings with exhibitors or other delegates as well as pre-register for conference and seminar sessions of interest. In addition, the system operates on mutual consent, which means a meeting is not officially scheduled unless both parties have accepted the meeting request.

EGN's pricing is another competitive advantage, as the show offers a variety of cost-effective exhibition space, meeting rooms and other facilities where companies can demonstrate their latest technologies and hold important business interactions. There are several pricing options for companies who are not interested in exhibiting but would like access to EGN's key activities.

GIN: Who is the show aimed at, primarily?

Bennett: Every company and person who has an interest in doing business within and around the international gaming industry: publishers, developers, retailers, distributors, hardware platform owners, peripherals makers, lawyers, researchers and mass media and computer and video game journalists. EGN is an opportunity for developers, publishers and hardware providers to present their latest games and technologies before the Holiday season. As with E3, anyone in the business of games should have a presence here.

GIN: Will journalists have better access to games, as opposed to ECTS which has fewer stands and new product every year?

Bennett: You have hit the nail on the head – ECTS is no longer a games show. EGN, as already stated, is a totally focused GAMES industry expo, supported heavily in practice by publishers, developers, distributors, etc. If it's all things games you want to see, EGN is the place to be. Several companies have already announced they will be showcasing never-before-seen titles and products and we expect more to follow.

With an EGN pass, trade visitors can visit the new consumer expo Game Stars Live on the same site, and get a vast array of consumer perspectives on the Holiday releases. There will be something for everyone of any age or ability, with the Game Stars Live central stage, hosting music acts and celebrity appearances, various challenge areas set up to find the best players of the best games, the UK’s largest ever PC gaming tournament; plus a huge on-site GAME retail outlet, bars and interactive feature areas so you can pack full your day.

GIN: Does having two trade shows in the same week seems to send a confusing message and make the industry look like it's divided in some way?

Bennett: ELSPA and partnering organizations such as TIGA (The Independent Game Developers Association) have organized this event because of the growing demand from companies wanting a comprehensive show to replace ECTS. There is only one wholly focused games show in that week – EGN. This show is presented by the industry for the industry, and with the exclusive support (and representation) of companies such as Nintendo, Amazon, Buena Vista Games, Capcom, Sony Computer Entertainment, Codemasters, Rockstar, Codemasters, Konami, Elixir, Kuju, etc., we know it will be a great success.

GIN: So how many people have committed to the new show?

Bennett: With more than two months to go, we already have representatives of more than 300 companies from 30 plus territories around the world confirmed as attendees and exhibitors. Again, EGN was launched with strong membership support of both ELSPA and TIGA so this show came together very quickly.

GIN: How does ELSPA see EGN developing – the new E3 perhaps. Will there ever be a rival to E3?

Bennett: I don’t think EGN can compete with E3 at this point, but I feel that, with its early fall date, EGN is complementary to E3 and sits comfortably within the annual games calendar. The European market is verging on the same size as the North American market both in terms of value and volumes but the markets have distinct differences in terms of culture and gameplay. There is, therefore, a real need to provide an effective and significant opportunity to "shop" the European market through a dedicated European trade games expo. EGN is not intended in any way to rival E3 but should be clearly identified as a complementary show that provides companies another chance to hype their titles before the Holiday season.

Some titles are now promoted well over a year before they hit retail shelves. E3 dominates the spring season and is often used to announce upcoming products. Because it is held in the fall, we envision EGN becoming a showcase for upcoming holiday products. We also believe many companies will use the show to provide a sneak peek of what they have in their pipeline for the following year.

Chella: Well good friends, it looks like I have a busy September ahead of me and two shows is better than one flagging one. It all sounds very hopeful and I'm looking forward to finding out – may the best show win.