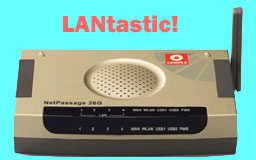 One of the best things about being a gamer is getting together with friends and hosting a LAN party. Sure, playing on the Internet is fun, but nothing beats storming your friend’s castle and watching the look on their face as their last line of defense crumbles under the weight of your mighty armies. Being game reviewers, we try to get together at least once a month for some good spirited downtime in this manner.

But as most of you who have gone to LAN parties before know, setup can be a real chore. First you have to lug your system to the party location, and then you have to get all configured onto the network. The host of the party has to have all his hubs, switches and category 5 cable, plus any systems that are set to be dedicated hosts, ready to go. Otherwise, the dull setup can take more time than the actual gaming.

To compensate for this, many hardcore LAN gamers have started to invest in high-performance notebooks. They still probably rely on their powerful desktops for tournament play, but at least in our circle of friends, many show up with a notebook for simple weekend play.

The Compex NetPassage 26G router can come in handy for mixed environments where some people have desktops and others have notebooks. The people with notebooks can connect to the NetPassage using 802.11G cards, though most notebooks these days, like those with the Pentium Centrino chip, have the 802.11G set on an internal chip. The 802.11G standard marries some of the speed of the faster 802.11A standard with the range of the slower 802.11B standard. There are four ports for desktop users to plug in their system directly to the router, or you can increase that number by adding a hub if you like.

The setup for the NetPassage was a snap. Pretty much you just plug it in, connect any of your wired users and if you want Internet Access, you plug the cable into your ASDL/Cable modem. Everyone connecting through the NetPassage can then share an Internet connection if they want to surf the Web between games, or if you want to invite remote users to play on your network. Wireless users don’t have to do much of anything other than turn their notebooks on, whereupon they will detect the wireless signal and connect, at least with the latest Windows XP operating system.

The LED lights on the NetPassage are visible from both the top of the device or the side, which is helpful considering most LAN party networks are not permanent fixtures, just setup in a living room or basement for the party. So you might not have a dedicated place for the router, just a coffee table or something. Being able to glance over to troubleshoot a connection problem is helpful from any angle.

The main feature that has been put forward by Compex, the company that makes the NetPassage, is that it has two USB ports. I know it sounds pretty strange to have a router with USB ports, but functionally they can serve two useful purposes. First, it lets the NetPassage work as a print server. That might not be too helpful for LAN parties unless someone needs to print out a game manual or hint file or something, but considering the NetPassage can serve as your primary means to connect your home computers to the Internet when not performing party duty, it’s a nice way to share a printer. Basically all you need to do is plug the printer into the USB port and then add the printer to whatever system, wired into the hub or connecting wirelessly, that would like to use it.

The second function is that the NetPassage can become a Webcam server. This lets all computers connected to the network see and manipulate the camera remotely. That is kind of a neat concept that I had not even really considered before. I could not think of a use for it during the LAN party, nobody wants to see a bunch of computer geeks sitting at their computers most likely. But I did hook up a camera later just to test out the functionality. There is a little bit more to setting up a Webcam server than setting up a print server, but still it was a five minute process.

The Compex people asked us to test out the NetPassage during a LAN party because we are a gaming publication, and it worked pretty well. Really highly detailed shooters don’t quite play as well over the 802.11G connection as they do when hard wired, but that is more a restriction of the wireless technology. For every other game type, we did not see much of a difference between the wired and wireless players. And even with shooters, you could probably chalk up the complaining of the wireless games as an excuse for getting fragged from time to time.

That said, the NetPassage is more suited as a way to connect computers in your house to the Internet. It works well as a mixed environment hub for gaming, but considering you can get a dummy hub for under 40 bucks that will allow eight or 16 people to connect wired into a virtual network, there is more economical ways to go. Still, if you pay $149 for the NetPassage to connect your home computers, the device could then pull double duty and act as the hub for parties, with the added benefit of letting wireless gamers connect in with no problems.