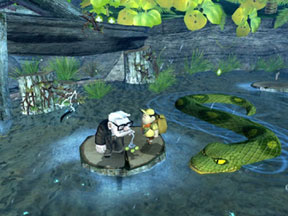 Sometimes we reviewers tend to cringe a bit when a game comes out following a movie. Although there have been a few gems, the game industry often rushes these movie tie-ins to make a bunch of money off the film, and lets face it – it feels like it. But that isn’t the case at all with Up. In fact, the cooperative nature of the game, the gorgeous graphics and the fun storyline mean that Up the game can actually compete with the movie in terms of excellence.

I guess I should divulge that I really loved the movie. It was one of those really good animation films that spoke to people of all ages. There was sadness and death and humanity, and a heaping helping of comedy as well. Although some of the kids in the theater I was at didn’t get some of the deeper meanings in the movie (one kid kept asking his mother why Elle wasn’t around anymore when it was pretty clear she died) it played to all ages. I am not often touched by an animated film, but Up got to me. In fact (prepare for sacrilege) I think it was better than Wall-E.

So really, I was doubly afraid to try and play the game. How could a game come close to that level of emotion put forth in the film? The truth is, it really can’t. But it scores big in other areas, like cooperative gameplay and providing a challenge without anyone getting hurt.

The movie follows the curmudgeonly old man Carl as he sets off to keep one last promise to his deceased wife. Of course in true Pixar (and Disney) style, he does this by tying thousands of balloons to his house, which the mean old construction company is getting ready to knock down. In the film, there is a reason for this zaniness with the balloons that turn his home into an airship which isn’t shown in the game, but it doesn’t really matter. You are told that Carl is off to South America to find Paradise Falls, and shown that chubby boy scout Russell has hitched along for the ride.

Following a storm, you are dropped off in the jungle, sans house. The house is floating nearby, but acts like a carrot at the end of a stick for the first part of the game, with you following it but never quite catching, well, up.

The gameplay in Up is really genius, especially if you have two human players sitting there together. It’s still fun with only one person and the second player controlled by the computer, but not nearly as much. You see, each character has special abilities and they often have to work together to get past obstacles. Carl has a walking cane for example (complete with four tennis balls at the bottom just like in the film) so if he gets to a higher ledge, he can lower it down to help the pudgy Russell up. Russell has some special abilities too, like a mirror that can be used to reflect the sun and drive off enemies. Each player will get to shine a lot for the other here.

There are enemies in the game, but you are never in any danger of dying, which is a big plus in an E-rated game. For the most part, if you get stuck with a porcupine or chomped by a jungle plant, you will lose some energy. If your energy bar depletes to nothing, your character will be sluggish and complain about wanting a candy bar. Thankfully, there are lots and lots of jungle trees along the way that drop fruit or plants that grow it. These each have an unlimited supply of fruit, and eating about three bites restores your energy all the way to maximum.

You will also find a bunch of two player puzzles that are fun to solve with your partner. These are things like turning logs with a maze of little spikes. One person has to (slowly) turn the log while the other navigates the maze, and then turn the log for the other player while they cross. And there are certain puzzles that can only be solved by one player or the other depending on their abilities. If you are playing with a computer, then those will be solved for you.

You are also in a bit of competition with your partner too. Carl wants to squish jungle bugs found along the way, while Russell wants to save them. So you try to outdo your opponent by smashing or collecting as you go. Both Carl and Russell also are trying to complete goals and these are not competitive. Carl wants to fix his adventure scrap book by finding missing pages and Russell needs to find objects to complete his merit badge set.

There is a level early on that even takes place on a raft, which is really just a log. This arcade sequence has you paddling up river as fast as you can. And there are crocodiles that swim around and try to eat you, though even if they get you, it only makes you fall off the raft and replay that part of the river again. The fun thing is that both players have influence on how the raft works, so working together is critical, or at least not accidentally working against each other. My test partner and I were in stitches throughout the rafting levels. It was great, but lasted just a tad too long.

And yes, everyone’s favorite character, Doug the talking dog, shows up. And yes, you get to play him. Doug really made the movie for me with his big goofy dog grin and slightly out of step speech synthesizer, and he was a joy to play here too. He even gets into a -wait for it – dogfight with other pooches flying around in WWI-era biplanes launched from Muntz’s airship. Muntz, the former famous explorer turned evil, is of course the main enemy in the game, and has an army of talking dogs to back him up (other than Doug of course).

But at no point are you ever in any real danger, so kids can have a great time without their parents worrying about nightmares or anything like that.

Also, the game is out on multiple platforms, but I specifically requested it for the PS2 for this review. The reason is that the PS2 is very cheap right now (just $99 as of this review) which makes it a perfect family game system. Perhaps it doesn’t have the sleek motion controllers of the Wii, but it’s a solid system. It really rises to the challenge here, with amazing graphics that really hide the fact that this is a last-generation platform. It’s worth the $20 you will buy the game for on Amazon and then some.

So do yourself a favor and grab a copy of Up. If you haven’t seen the movie, you won’t be lost, though you will probably appreciate the storyline a bit better here if you have. And, the film is awesome, so give yourself a double treat. And keep looking up!