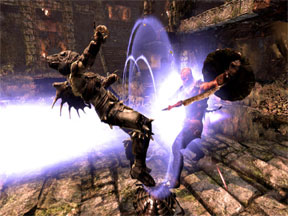 Dungeon crawls have been around for about as long as computers. Anyone remember Rogue? (get a copy compliments of GiN at the link) It might have been all ASCII text, but it was a dungeon craw nonetheless. The point is that hack and slash adventures have been with us for a long time. And for the most part, they haven’t changed very much, though they prefer to be called Action RPGs these days.

Hunted: The Demon’s Forge attempts to change that formula up just a bit. And it does so without losing the flavor of why we love these types of titles. Plus, it does something that NO OTHER GAME has done before. Notice those capital letters? Yes, I was screaming that. It adds in a level creator program as part of the fun. So you can design your own dungeons and see if your friends can get through them. On the PC side, we’ve been doing that forever, especially for Bethesda games that release the developer tools as part of almost every title. But never has this been done for console gamers. And after playing around with it on the PlayStation 3, I can say it’s about time.

Granted this is not a full-on toolset. But you can make some really nice and clever dungeons, and not have to spend a lot of time doing it either. I’ll talk about how the dungeon creator works in a bit, but let’s focus on the game itself first.

There are two characters in the game. One is your basic bash-them-all warrior named Caddoc. The other is a sassy elf archer named E’lara. They are not your normal heroes, more of a very small mercenary company. They do things for coin, and make no bones about it. Players can take the role of either character, and thankfully the game does a very good job of making the computer-controlled partner act intelligently. Once or twice I had my partner suddenly stand there brain dead for part of a level, but eventually they started acting properly again. You can switch between characters when you find special crystals scattered throughout the game. Some levels obviously want you to be an archer and some are more melee-themed, but you can stick to being one person for the whole game if you want.

If you are fortunate enough to have a friend who wants to play with you, they can join you in local splitscreen mode or over the Internet. You can even leave the option open where someone can just jump in and take control of your second character, and there are enough players that if you do this, you won’t have to wait long for a partner to show.

When playing as Caddoc, your main move will be to block an enemy attack once you find a good shield, and then counterattack. Weapons never degrade but your shield will, and can even shatter, so keeping a good one on your arm is a lifesaver. If you are playing as E’lara you might unsheathe her sword from time to time, but mostly will be shooting rapid fire at approaching hoards of bad guys. Caddoc has a crossbow too, but while it’s very powerful, it’s too slow to use as a main weapon. So you have your melee attacker and your artillery support.

There are weapon racks in the game and when you smash them, you can pickup a new blade or bow. Caddoc always finds new melee weapons and E’lara always finds new bows. There are even magic weapons which are generally weaker than their non-magical counterparts, but come with a limited number of charges that make them uber-powerful when expended. The catch is that once they are out of charges, they are generally worse than a non-magical weapon of the same type. So that’s kind of a nice balance in the game, though it means you probably won’t get used to a single weapon for very long.

As you kill monsters you gain experience and gold. Unlike most games, gold is mostly just a matter of keeping score here, as weapons and health potions drop in copious amounts all the time, so there is nothing really to purchase and no stores besides.

You will gain experience points, really a form or crystal, that can be used to buy up skills. There is a mechanic involved where you turn the crystals into a demon girl who may or may not really be on your side (Caddoc likes her but E’lara thinks she’s trouble) to buy new skills. These shards are found fairly regularly, so your level up process is smooth and ramps up with the difficulty. The most powerful skills you can purchase are magical ones, either adding to the power of a weapon or letting you direct cast helpful spells like lighting bolts and fireballs. Both characters are equally good with magic.

As a huge bonus, you are actually rewarded for exploring the less used paths in the game. Thank you so much! It’s high time a game gave us something for going down all those alleys other than dead ends. In fact, in Hunted, I’ve found entire dungeons that were extremely fun and challenging which were sitting off the beaten path. I would have missed a lot of great content by just staying on the rails the story directs you down. So go explore and you will find things.

There are some puzzles in the game, and thankfully they are not too difficult. Mostly they are things like finding the correct color flame to light a torch with, or collecting parts of a key to open a door. In other words, they are not so tough that action gamers will be turned off by them, but not so easy that you don’t get that "ah ha!" moment when you solve them. Nice job on the variety of gameplay there.

In terms of role-playing, there is not too much other than leveling your character. Caddoc and E’lara have some great banter that may leave you laughing on the floor from time to time, but you don’t actually have anything like a dialog choice in the matter. If you want hardcore RPGing, you’ll have to wait for Skyrim.

I already mentioned the level creation, but I wanted to talk about it just a bit more. As is typical of most games these days, you don’t have access to all the backgrounds and monster types to begin with. You need to unlock them as you play. It kind of makes sense that the developers would not want you seeing all the cool levels and backgrounds before you actually played them, though this does force you to go through the single player game to get to all the content creation abilities. Thankfully the game is darn fun. You easily can chain rooms together, give them themes, and create the perfect dungeon crawl of your own.

The truth is that I am not really an action RPG type of guy. I’m more of a play-for-600-hours-on-Oblivion hardcore RPGer. Action RPGs never really intrigued me too much. But I loved Hunted. All the hidden levels, the puzzle solving, the twisty plot and yes, the combat too, was thrilling. Making the game able to be played by multiple people locally or over the Internet is great. There are not enough games like that and it’s a huge strength of the console platform that is mostly unused. Finally, the adding of the first ever console-based level creation engine is just icing on the very bloody cake. Go to your local store (or follow the Amazon link above) and hunt down your own copy of this 4 Â½ GiN Gem title.