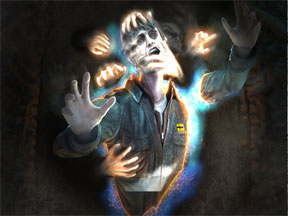 After my thrilling experience with Black Mirror 2, which you can read for
yourself here, I was more than ready to dive into the final part of this epic trilogy. Then a little problem that I like to call school got in the way. I truly wanted to play this game, but in the end it kept getting pushed back for titles that I could take on the go (I really need a laptop).

Finally though I found the time to sit down and give this game the attention that it truly deserves, and I wasn’t disappointed.

Black Mirror III (BM3 from now on) starts off right where the last game left off. So as not to spoil the second game, for anyone who hasn’t played it yet, I’ll be skimpy on the details. What you need to know though is that Darren escapes back to the Gordon Mansion only to see it engulfed in flames, and what’s worse is that when the police show up, our hero Darren is holding his torch like an idiot. So as I’m sure you’ve probably guessed, Darren gets thrown into jail for about three weeks. After this your bail gets paid and you’re free to run around Willow Creek to try and prove your innocence and then continue on with unlocking the curse of the Gordon family.

A new addition to BM3 is that we now have two players we can control, one of course is Darren and the second is Valentina.

Valentina is our companion if only to keep us from having to run all the way to the other side of a building to pick up one item. It’s nice having her around and adds a little mix as we get to see Darren from a perspective besides his own.

Gameplay for BM3 is exactly like its predecessor. You’ll spend a lot of time clicking around trying to solve puzzles or find secrets to progress the game. The only way it differs is by having Valentina around. Sometimes the game sets it up so that before you can progress as Darren you’ll have to play as Valentina and vice versa.

That being said, the puzzles can be frustrating at times. Most of them will go by without a hitch. Others may leave you scratching your head for quite some time. So overall the balance of easy to tough puzzles is well done in BM3.

The audio for BM3 is one of the hardest things to judge. On one end we have well placed music and sound effects that greatly add to the overall experience of the game. On the other end though we have the voice acting, which isn’t exactly up to par. Okay so actually it’s far from par. BM3, much like BM2, is riddled with horrendous voice acting. As if Darren wasn’t bad enough to listen to now we have Valentina as well. So neither one of our main characters is overly appealing, but what about the rest of the voice cast? Well it doesn’t get any better. I’ll tell you that much.

Next up is another aspect of BM3 that is both good and bad. I’m talking about the graphics and all that they pertain. We’ll start off with the good. BM3 has some amazingly detailed environments. Every nook and cranny is filled to the brim with details. Also all of the characters in BM3 have a nice amount of attention given to them as well.

Here is where we run into some problems though. There are a lot of cutscences in BM3, which is normally a good thing for a game, sadly though BM3 has horribly clunky animations. So instead of watching an amazing fight scene at the end of the game, we are treated to a five second display of just how awkward you can make a battle scene and still have it count as just that. This alone left me discouraged with the finale of the game. That isn’t to say that the story suffers itself. Instead it’s just that the animations can’t truly get across just how great the story is.

At the end of the day BM3 is a great finish to the trilogy, even if it suffers from some bad voice acting and animations. Those who have been playing this series since the first BM or even the second (like me!) will be satisfied with this game.

Also a small note, if you are the type of person who doesn’t watch all the way through the credits…do it this time. Not to spoil anything, but I smell the brewing of either a sequel series or a spin-off in the making. I’m excited to see where this goes!

Black Mirror III: Final Fear gets a solid 4 GiN Gems out of 5!