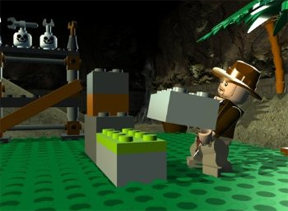 My love of Lego predates my discovery of video games, and bringing the two together has been a major hit in the past, but while there is some good innovation in the series with LEGO Indiana Smith 2: The Adventure Continues, they forgot or missed the mark on some of the things that made the previous games so popular.

The original LEGO Indiana Smith took on the first three movies so you would expect that the second game would tackle the forth movies, which it does. They also went back and pulled more scenes from the first three movies, carefully not redoing scenes they had already done, which in concept sounds good, and for the first time ever Traveller’s Tales added a level builder. Sounds pretty good so far, so what is wrong with this game?

If you hop right in and start playing the crystal skull, the game play seems unchanged. Cut scenes keep pace with the movie and you walk around and smash things and solve puzzles to keep moving along the path of the movie.

The first thing I noticed was missing was the main area of the game. First of all you start off in the warehouse and you can only select one crate, the others open up later. When you open the box you look at a box of legos and when you flip up the lid you are shown a bunch of stuff you can reveal about that movie. Normally this is all presented to you game-wide from a central location such as the Star Wars Cantina or in the case of the first Indian Smith game this was all done at the University.

Come to find out this time around each movie, or in the case of the crystal skull each section of the movie, has a different main area. I personally miss the one big area where you could unlock new characters and find bricks in the different game areas to build treasures. I don’t like it broken up.

I continued on playing the Crystal Skull and I was having a good time with some of the new features including the new split screen. In past games in the Lego series if you got to far from your buddy you would be forced to stop and get back together to proceed, but this time around the screen splits and rotates with the line in the middle spinning to show the division. To go back to full screen the characters just need to move in the direction of the line. That’s pretty innovative.

Also Indy’s whip is a lot more useful. Not only is it more useful in fights but you can use the new targeting system to better aim at specific targets in fights and to help you adventure. Both are very useful and good additions to the game.

If those where the only positives and negatives, I think this game might have a chance of being a hit. However, I have a few more negatives to add. First off, all the other games in the series have been good without the need for big boss battles that never appeared in the movies. So why does this game need them? Secondly, since they decided not to repeat any of the content from the first three movies, those segments of this game are very disjointed and do not flow. And finally, they have removed the locked areas and secrets from the levels so that you are less inclined to replay them with other characters. Instead they have added new areas you can discover and unlock from the main areas. I think this takes away from the replay value.

I mentioned earlier a new addition to the game: a Level Builder which is pretty cool. Yet it too fails in one important area. I recommend starting off with the tutorials which walk you through placing new pieces, raising and lowering the land, and finally adding base blocks line roads and repositioning them so that are aligned as you wish. While your designs will probably never be as intricate as the developers, you can make some pretty fun challenges and then switch to play mode and test them out. One of the fun parts is the ability to switch back and forth as you add new things.

But I mentioned a negative and it’s a big one. Where is the option to upload your creations or download other player’s maps? I guess no one at Traveller’s Tales has picked up a copy of Little Big Planet which I am happy to say my wife and I finally did. That game shows how you can build a huge community of players who share maps easily with one another.

I am not blind to the fact that Traveller’s Tales is trying to keep the LEGO genera fresh with some new ideas, and I applaud them for the attempt. Split screen alone is a wonderful addition. I just don’t like a lot of the things they have done, and I think they take away from my enjoyment of this game. So it earns them just an average review rating this time around.