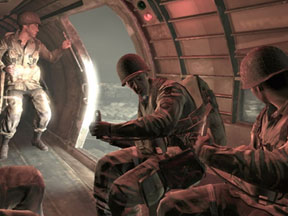 For those of you who remember and keep track of such things, the Medal of Honor series really jumpstarted the popular WWII shooter genre, at least in recent years. Played a lot like the true original, Castle Wolfenstein, MOH is mostly one man going through a series of shooter missions against thousands of German, or more recently Japanese, troops.

The game has a huge following for both its single player missions and its online deathmatches. But in recent years, MOH has kind of slipped in popularity, falling to the more varied gameplay (driving tanks, multiple characters and stories, missions based on movies) of the Call of Duty series. Now that Call of Duty has moved into Modern Warfare (a review of that game, Call of Duty 4, will appear next week) I guess the MOH developers decided this was their best chance to reclaim lost ground in the WWII space. And like most major cities that have expanded to their limits horizontally, they decided to build upwards.

MOH Airborne follows Private First Class of the 82nd Airborne Division Boyd Travers from his tentative first combat jump in Italy all the way up to a cataclysmic showdown at the last bastion of Nazi rule surrounding a seemingly impregnable flack tower.

At the start of each mission, you are up in a C-47 transport plane, waiting to jump. When you get to the door, you can look down at pretty much the entire map you will be fighting over. There are green flares going off in areas where friendly troops are waiting. Once you make the leap (if you wait too long you get pushed out) you can steer your parachute so that you can almost land anywhere on the map. So if putting down on a rooftop gets you an advantage over the defenders, you should go for it.

There is a proper way to land and you can even hit the ground running. And there is a bad way to land, like snagging a clothes line and getting tossed into a wall. The later method may not kill you outright, but if the Germans on the ground don’t die laughing, they will probably have enough time to shoot you up real good before you can even get onto your feet.

So of course I headed right to the rooftop where all the flack cannons were at, which was a little scary I have to admit, but I found that if I came down right in the middle of them, they could not turn far enough to shoot me. Once I plopped down I started sprinkling the area with grenades, which disrupted the gun crews as they dove for cover. In no time at all, the roof was secure and some of my men started coming up the stairs to join me.

Which brings me to one of the biggest flaws in the game. Like a football team that knows how to pass but has a bad running game, MOH Airborne does not really play so well once you get on the ground. Case in point, I had a bunch of friendly guys joining me on the roof, yet the lower floors of the building were still packed with bad guys. So how did my men suddenly come running up the steps to join me? Then to make matters worse, I cleared out the entire building and moved onto another objective. But then I was called back later in the mission and guess what? The building was full of enemy troops again with no explanation as to how they got there. Were there German paratroopers in the mission that nobody told me about?

Eventually I realized that Airborne did something that a ton of other shooters do in order to make the difficulty harder and that is the constant respawn of enemies. Why bother to make the bad guys smart when you can simply make them legion I guess.

This was really evident at one point where we were assaulting a small two story house. I had a good position in cover about thirty yards back with a perfect view of the entire front of the structure. Each time a group of Nazis would charge out the front door, I would gun them down with aimed shots from my Garand rifle while the other men in my squad would shoot ineffectively and yell a lot. I did this for over five minutes, upgrading my rifle for my trouble (we will explain this nifty feature in a bit.) But the Germans just kept coming. I started to wonder if this was one of those circus clown car acts, which somehow had hundreds of Germans stuffed into a tiny house.

This respawning really bothered me and happened more and more often as I played. I would toss a grenade into a house which would kill the defenders. But then if you waited any amount of time at all before running inside, instead of finding carnage and an empty room, you will find a bunch of freshly spawned bad guys shooting at you. I realize that MOH is not supposed to be hyper-realistic or anything, but that just came off as a little too cheap for me, and completely unrealistic.

This also happens because I don’t think the developers really thought out the way people will play the game. Most every MOH game has been completely linear so far. So they could put enemies behind crates or on top of bridges and figure you would have to move through them and then that would be it. But here, they don’t know where your starting position is at. With objectives spread out across the map, my guess is that they were very afraid of having you run through an empty town if you, say started in the middle and then ran to the west to achieve and objective, but then had to go all the way back to the east to finish up. So you will almost always find new battles going on in ground you have already conquered, only your troops will be manning the mounted machine guns (which are suddenly pointed in a direction that is helpful to you as you backtrack) and the enemy, which popped out of nowhere, will be launching an assault. I like the "land anywhere" new feature, but the ground game seems unchanged and is unsuitable for the new 3D battlefield.

Onto the good things about Airborne, and there are quite a few. Weapons that you use a lot get upgraded automatically, kind of like a role-playing game. So if you are using your Thompson as much as Vic Morrow’s Sargeant Saunders from Combat! then you will soon find it upgraded with a front handle for increased accuracy. Weapons can go through several levels of upgrading, so use your favorite as much as possible.

Graphically, the game looks amazing, though some of the levels are a little dark. Also, the game uses that shaky camera view from time to time that is so popular in movies these days where things are so wobbly in fight scenes you can’t really tell what is going on. I hate that in movies but can tolerate it. Here, where being able to see what is going on is a matter of life and death, it’s maddening, and not very realistic. Pick up a gun (or perhaps it would be safer with a stick) and go running out in the park in real life. Guess what? Unless you have had one too many drinks, your vision will stay just fine, so don’t subject me to that type of movement in a game please.

There are a few nice touches with the AI. Troops that are less trained tend to break more quickly. So an enemy recruit (or almost any Italian soldier in this game) will panic and start running away if a grenade lands nearby or you put a lot of fire into their position. Whereas a more trained soldier like an SS guard won’t spook so easily. At the load screens between levels you are shown different soldiers, their general weapons and level of training, which is a pretty neat touch.

There are only a handful of missions, but each of them lasts a long time, with multiple objectives to achieve and a lot of surprises. If you are really good at shooters and play straight through, you can beat the game in about six hours. It took me more like eleven, but I like to hunker down if I find a good spot, play with enemy machine guns and do some sniper work when I can, so I go through levels slower than most.

All in all Metal of Honor Airborne is a good game and a lot of fun. Parachuting into a mission adds a new element, though it only lasts for a few seconds whereas the rest of the level is played on the ground. Some elements of the game might be a little frustrating, but overall I think almost any fan of shooters will have a great time.