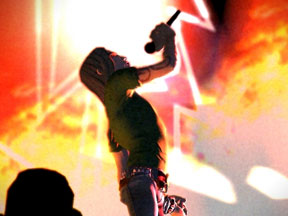 With Harmonix’s purchase by MTV Games, their days of the Guitar Hero franchise are over (even though their successors at Neversoft did an amazing job in such a short notice.) But upon joining MTV Games the big question is why just stick with guitars?

After all, this is the same developer that made the Karaoke Revolution series for Konami, so why not add that feature as well? While we’re at it, why don’t we try something new? Include a fairly realistic drum simulator. And to complete the mold, why don’t we let everyone play all three instruments (plus an extra guitar available for bass) and team up as a cohesive unit?

That basically turned out to be the formula for Rock Band, and it has been a title I have been keeping an eye on for a very long time, and for good reason. For starts, we have one of the greatest music game developers behind the wheel in Harmonix. We have a game which centers more on multiplayer than their previous efforts that centered on single play. And most importantly, we have a music game that finally comes out with the potential for an unlimited number of songs in the near future.

But of course, the biggest question will be if the game is fun or not, and the answer is a unanimous yes. Not only could Rock Band come down as the best music based game in recent history, but also as one of the best multiplayer and party games of all time.

For $170, the Rock Band Special Edition comes complete with all that is needed to play out of the box, including the Rock Band game disc, one USB handheld microphone, one Fender Stratocaster guitar controller (wireless on PS3, but wired on 360), and one four panel drum kit (with foot pedal to function as a kick drum.) A powered 4 port USB hub is also included in the 360 version.

In addition, the game can be purchased separately, and on the 360, the wireless Les Paul from Guitar Hero III can also be used, as well as the Live headset in place of the microphone.

Those that are familiar with Guitar Hero should easily be able to pick up the guitar segments of the game. In fact, those who are used to Guitar Hero III will notice that the difficulty has lowered, as Harmonix always tended to lead towards the more casual approach. That’s not saying it’s a complete breeze though, just there won’t be anything of DragonForce like proportions. New to the guitar section of Rock Band are solo bonuses. Appearing as blue on the note bar, notes completed will be displayed by a percentage counter, which offers a bonus depending on how well the solo is played. Bass also has its own bonus called a "bass groove," which is earned whenever the multiplier goes up to 6x (something other instruments cannot do, having their usual cap of 4x.)

The guitar, based off of the legendary Fender Stratocaster, feels more authentic and less toy like in comparison to RedOctane’s efforts. The buttons are flush with the fret, so it takes a little time to get the feel of the buttons. The strummer is also different, as it feels more flimsy and rubbery. It does however, eliminate the annoying click sound that we are all accustomed to. Added for cosmetic purposes is a selector switch that allows special effects (wah-wah, flanger, chorus, or echo) to solos and notes that are in Overdrive mode (Rock Band’s version of Star Power.)

While Overdrive might function to double the scoring like it did in Guitar Hero, it also has another important perk. Sometimes a band member might fail out of a song, and in doing so, the crowd will show their disapproval and boot your band off the stage. However if anyone has Overdrive available, they can save the failing band member but at the cost of a strike. Three strikes and that band member is gone, and unless you’re near the end of your set, good luck finishing the song in time!

The microphone is also similar to Karaoke Revolution. Lyrics scroll at the top of the screen (bottom if played in solo mode) and performances are rated by both phoneme detection and pitch quality. I noticed that it takes quite a bit of practice and sensitivity adjustment to get the pitch settings right. Either I need to finalize my calibration, or my singing is just so bad that Simon Cowell wouldn’t even give me the time of day to rip into me. The microphone does have another unique feature, by hitting it to emulate either a tambourine or a cowbell. And yes, Blue Oyster Cult does feature the singer as a cowbell player, but sadly, no Gene Frenkle character. That can always be created though.

Without a doubt, the best instrument, and by far the most challenging to play, is the drum set. With four drum pads and the kick drum foot pedal, the drum set turns into an exercise in rhythm and endurance. The kick drum alone makes it a challenge, and I have noticed a lot of people having trouble playing it. Harmonix has even gone as far as saying that if you can play the drum mode in hard, then you are ready to play the drums for real. I’m open to that challenge!

Single player mode consists of both quick gameplay and the Solo Tour, which plays in the same style of Guitar Hero. There are nine tiers (each representing a city) consisting of five songs each. In addition there is an additional city consisting of thirteen bonus tracks performed by lesser known bands (most done by Harmonix’s own staff.) But it is the Muliplayer Band World Tour where the game really shows off its stuff.

Starting off with a small following, you and up to three fellow bandmates must perform multiple setlists to gain fans and money, eventually being able to hire roadies and managers, obtain tour buses and airplanes, and go as far as performing charity events or making like Metallica and "sell out." The possibilities with the Band World Tour are virtually endless, except for one problem. Band World Tour is only available offline via local multiplayer. Rumors abound regarding a possible patch that will fix this. I only hope it is true. After all, I thought the online community is what Rock Band was all about.

Still, online multiplayer allows getting four band members to team up on the available setlist or go against them in either Tug of War or Score Duels. Playing through a few rounds of Online Quick Play, I noticed there was no lag at all. However whoever is playing as singer will not have their voice transmitted over the network. It is replaced by the vocal track from the song. That might not be a major issue though.. After hearing some of the caterwauling that took place during the Rock Band 2007 World Tour, I’d rather hear the default track any day.

Of course, no music game can be successful if it doesn’t have a killer music lineup, and Rock Band does not disappoint in that at all. Here we have 45 licensed tracks, in addition to the previously mentioned 13 bonus tracks, a total of 58 songs to play with. But what is more important is that with the exception of only seven tracks at launch, the remainder are all master tracks! But that’s where it begins, as MTV and Harmonix are offering constant downloadable tracks, available as full albums, the obligatory three pack, and as single downloads. The first available three packs will feature Metallica, Queens of the Stone Age, and the Police, and are currently available for $5 on Xbox Live. Individual songs, both part of the three packs and also separate songs (the first tracks include covers of CCR’s Fortunate Sun and The Knack’s My Sharona) will go for $2. Without a doubt the downloads will make the game’s following last a long time.

Having master tracks doesn’t just make the game sound great, but also the way they are executed. As the song is played, not only can each of the instruments be heard (as well as your voice over the speaker system,) but as the performance gets better, even the crowd starts to sing along as well. Nothing gets you more into a performance than when the crowd joins in. Some songs also feature special finishing segments where performers can go all out and play whatever they want to obtain a huge bonus (pending they all hit the final notes correctly.) I will never look at Paranoid the same way because of the great ending that was added, and it’s even a cover!

The visual quality of Rock Band is a unique taste, which like Guitar Hero is based on a live performance, Rock Band’s is more music video-esque, as can be told by all the graphic effects that are used. Some people might be turned off by the look in Rock Band, but in my opinion it fits well. I would almost pass it off as FMV but considering it uses all your bandmates the way you dressed them, it is quite amazing.

Rock Band is without a doubt a multiplayer experience. Anyone who has a strong love of music and enjoys playing (or singing) along will get a kick out of it. With the expansive music selection via download services and hopefully an online version of Band World Tour as a possible download, then I will be playing Rock Band for many months to come. This year’s multiplayer game of the year has finally arrived!