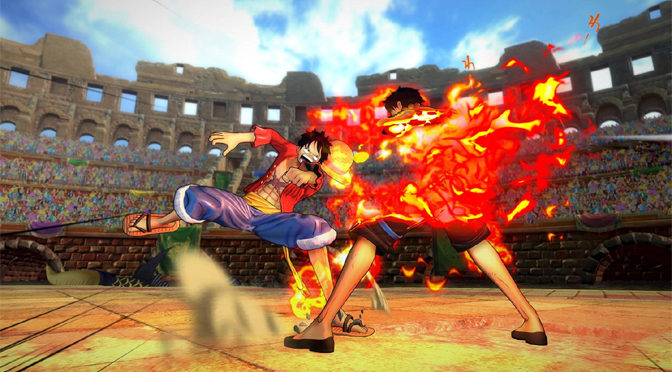 Hi all. I’m back with a look at another Anime game. It’s One Piece: Burning Blood!

Plot: I’m not going to write a synopsis, as the series is way too long to be covered shortly and what I’ll say below removes most need for it. The plot follows the series starting from the Marineford Arc, all the way to the end of the Dressarosa Arc.

Gameplay: The gameplay is frustrating at the best of times, and while I was looking forward to the game I’ve always been aware that games of Anime and Manga series tend to be either a total hit or miss. This was a definite miss, as the gameplay is highly skewed towards favoring the CPU enemies, who don’t have much of a time lag. I’m not an expert at fighting games, but I don’t think getting my butt kicked repeatedly for 20 minutes during the second battle of the story mode is acceptable.

It may get better later on, but the simple fact is that those first impressions are important and the gameplay just doesn’t justify the price tag it has. The difficulty ramp up from the first to second battle is highly unusual and just frustrating to the average gamer. That or I may be playing the game wrong, in which case I’d be happy to be wrong as I really wanted to enjoy this game.

Characters: While not reaching the huge number of characters that the Naruto Ultimate Ninja Storm series reached, Burning Blood does have quite a few characters for a fighting game. That being said some are pretty broken in terms of balance, Doflamingo comes to mind with the crazy amount of ranged attacks he has.

[amazon asin=B01617VWU2&text=Get your blood burning with a copy from Amazon!]

Art: The art in this series is beautifully done, and while it has some screen captures from the Anime, it’s mostly for the Story mode. I enjoy the art immensely, but it’s just not enough to make up for the gameplay.

Music: It sticks to the One Piece Anime musical score pretty well, although there are some out of place tracks, like the main menu. Regarding the voice actors, it’s pretty much taken straight from the Japanese dubbed Anime, which has always had excellent voicework. Those looking to enjoy the series with the English dub will be highly disappointed, but honestly if you’re the type of person to be buying this you probably don’t care all that much.

Overall: For fans of the series they’ll be interested in it, but even the most fervent fans may find the gameplay to be too weak to justify a purchase. For anyone else, I’d just steer clear of the game entirely.

For those who like: One Piece, Fighting Games, Difficult AI, Amazing Artwork, Awesome voicework.

Not for those who don’t like: Any of the above, especially the difficult AI.

One thought on “A Huge Hunk of One Piece: Burning Blood”