During Awesome Con on Saturday June 4th I attended the Question and Answer panel for author Timothy Zahn. Timothy Zahn is a best-selling and Hugo award winning author known for his Star Wars novels and other works of Science Fiction. He wrote ten Star Wars novels beginning with the famous Thrawn Trilogy.

The Thrawn trilogy consists of Heir to the Empire, Dark Force Rising, and The Last Command. Here is where we meet Grand admiral Thrawn, a Chiss, who is leader of the Imperial remnant following the events of Return of the Jedi. The story takes place around 9 ABY (After Battle of Yavin), the battle to destroy the first Death Star in Star Wars: A New Hope, and follows all the heroes from the original Star Wars films; Luke Skywalker, Leia Organa Solo, Han Solo, Lando Calrissian, Chewbacca, and our favorite droids. The stories also introduce other characters like Mara Jade, Talon Karrde, Garm Bel Iblis, and Gilad Pellaeon. 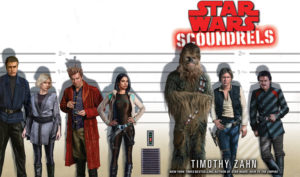 These characters have had larger roles in the Expanded Universe. All created by Timothy Zahn. The Expanded Universe spans Star Wars history from the beginnings of the Jedi about 26,000 Years before Yavin to 136 years ABY. Other Star Wars novels within the Expanded Universe by Timothy Zahn are Spector of the Past, Vision of the Future, Outbound Flight, Survivor’s Quest, Allegiance, Choices of One, Scoundrels, and Fool’s Bargain. I have read all three books of the Thrawn Trilogy, Outbound Flight, and currently reading Choices of One, and can personally say that he is a great author and truly expanded on Star Wars from the movies. These novels also have great character development; good dialogue, and is quintessential Star Wars. He was the one who essentially started, what was formally known as the Expanded Universe now called Legends.

Timothy Zahn is well known as a Star Wars author but he wrote many other books in the Sci-fi and fantasy genre. Some other novels from him are Cobra series, The Icarus Hunt, The Conquerors Saga, Dragonback series, and Quadrail series. He has written over forty novels, many more short stories, and novellas.

For me I come to the Question and Answer panel as probably other fans did not only to learn about Timothy Zahn as an author and how he got his start but also his thoughts on the Expanded Universe becoming Legends. When Disney acquired LucasFilm in 2014 the only stories called canon were the six films and new novelizations. In 2016 it includes Force Awakens. All stories from the Old Republic to Star Wars Legacy comics have been designated as Legend. These stories were rich with characters, history, conflicts, heroes, and great stories. I found the answer but learned so much more about a great writer.

The session opened up with the host, dressed as Mara Jade, asking the questioned “how did you get into writing?” According to Zahn he got started by watching the Invisible Man TV show, which ran between 1975 -76. He liked the stories but his first real experience in writing began when he was pursuing a doctorate in Physics and in 1978 he sold his first story. After his second story in 1980 he discontinued the doctorate program and began writing full time. Timothy Zahn also told the audience how he became a Star Wars fan, it was seeing the Imperial Star Destroyer for the first time watching Star Wars: A New Hope in the theatre, then went to see it again 7 to 8 times. Heir to the Empire was first published in June 1991, and Zahn was delighted to write the story and thought it was a grand experiment. It paid off as he was contracted to write future Star Wars novels after the third in what became the Thrawn trilogy. These books are the earliest novels written for the Star Wars universe since Return of the Jedi and brought back Star Wars for a new generation all the while starting the Expanded Universe. Timothy Zahn has not worked on any new canon novels but would take an offer to do one, especially for any backstory of the new characters in Force Awakens and future movies. He is currently working on other projects, such as the StarCraft novels, and another Cobra book. StarCraft: Evolution will be released on November 15, 2016 according to Amazon page.

The session then opened to questions from the audience and some of the answers were enlightening. Some of the audience’s questions were on the characters in his Star Wars novels. For instance in the Thrawn Trilogy he created the characters of Mara Jade, Talon Karrde, and Gilad Pellaeon, what I didn’t know was he actually coined the name Coruscant, the Capital Planet for both the Republic and Empire. He also created the idea of having a lightsaber catch force lightening. In novels with identical characters such as clones he changes the character to distinguish them. The Luke clone had a stutter just to tell them apart. Even if it is just a passing reference Timothy Zahn likes to see his creations in movies and TV. He is also not concerned with the Expanded Universe becoming legend as he puts it, if they intend to get rid of the stories the novels would no longer be selling.

Timothy Zahn used the analogy of Robin Hood in describing the meaning of legends and canon, if someone found a letter under Stonehenge from Prince John to the Sheriff of Nottingham regarding Robin Hood the story no longer is a legend but is real history. If someone found historical evidence of Star Wars legends in the Coruscant archives they become canon. Legends can become canon, which leaves the option open for those stories to be brought into the new canon. This is good news for fans of the Expanded Universe that those stories may someday appear in the new novels, TV shows, or movies. I have hope.

On writing again, Timothy Zahn told the audience he does not want to tell other people’s stories but prefers to create his own characters and his own stories. As mentioned earlier in the session his background is Physics and came into writing. For aspiring writers, his stories came through practice, by just writing and working on character development. Dialogue was hard at first but over time it became easier.

It was an hour-long session with questions on his characters, writing, thoughts on the new movies and elements of the TV series Clone Wars and Rebels. I felt as though this session was a great way to end my Awesome Con 2016 experience. Instead of attending a panel with Movie and TV celebrities I got more from listening to a popular Sci-fi author and a great writer speak. He did not come from a writing background but became a successful author, which was inspirational. In the end we also learned more about creating and writing Star Wars characters and his thoughts on the future of Star Wars.