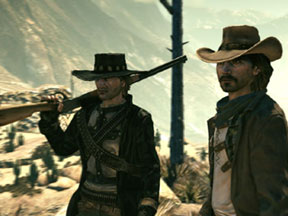 Call of Juarez: Bound In Blood

After the disappointing showing that Damnation made with me, I was a little put off on Western themed games. Thankfully I got over that long enough to review Call of Juarez, which puts the action back into the gunslinger genre.

The game starts with the tale of three brothers fighting for the Confederate Army during the Civil War. Well, two are fighting and one is becoming a priest. All of these men are changed by the war and the horrors they witness there including the destruction of their family farm and the death of their mother. Two become outlaws, not caring about anything while the third stays a priest and tags along trying to redeem his siblings’ downward slide into what he considers madness. You only play the two bad brothers and no, you can’t shoot your annoying priestly brother along the way.

A lot of the game is told in beautiful cut scenes. Normally I am not a huge fan of just watching a major part of a game unfold, but there is a great back story going on and it helps to know why the brothers act the way they do. Plus, these are some of the best cut scenes I’ve ever witnessed. The character models for the brothers as well as the other characters are extremely realistic. There were times when I thought I was watching a feature film and not a computer game.

The cut scenes are helped by the fact that Call of Juarez has got some great voice acting talent. Every single character sounds not only realistic overall but also realistic in context. A character begging for his life sounds really desperate while a trollop trying to seduce one of the brothers sounds sexy. It’s not only that the voices match the characters, but that the voice actors actually read the script and understood their characters’ motivations.

The only problem I have with the sound is that the brothers sometimes say things to each other in combat like "That one was mine" followed by "Sorry for saving your ass" or comments on each others shooting ability. These are good, but too often repeated to the point where it gets a little monotonous. Once per level per phrase would be good enough.

The actual game is played in first person and each of the two playable brothers have different skills. Most levels let you play as one or the other, but are cleverly designed so that either character can get through it by taking slightly different paths. On some levels the computer takes over as the brother you aren’t playing, and does a good job of being a true partner by not getting in the way and also killing its share of bad guys.

Thomas is the quieter brother and seems a little bit less harmed by the war. He’s a stone cold killer to be sure, but does not revel in it as much as his brother. As a character, he can shoot with a pistol in one hand or a rifle (or shotgun). He also has knives which offer one shot kills if he hits someone. They are also silent, so on certain levels it lets him make stealth kills without alerting nearby enemies, though this is a little rare. Later in the game he can get a bow and arrows, though this seemed very underpowered and not really worth it. He also has a lasso that can be used to get to the top of roofs and over obstacles.

Ray is the more deadly brother and has a worse attitude. He’s also the up close and personal fighter of the two. He can hold a pistol in each hand and also use a rifle or shotgun. And he can hold a pistol in one hand and a bundle of dynamite in the other. The dynamite can be used to clear paths or can be lit and thrown at enemies. He’s not supposed to be as good with a rifle as his brother, but I used a heavy rifle with a scope very effectively with Ray. And I like his bad but humorous attitude. Those of you who have played the games in this series set after this game (but which came out before) will be surprised at how Ray acts in this game, at least as his character develops.

Both brothers can ride horses and both can upgrade their weapons at shops. Most of the weapons you find on bad guys are rusty pieces of junk. They shoot slowly and are hard to reload. Once in a while you will find something good, but not often. When you kill people however, they drop bags of money that can be spent at gun stores along the way. Unfortunately, you can only upgrade the character you are playing at the time. So if you are playing Ray when you find a store, you can only upgrade Ray’s equipment even if Thomas is right outside. You will have to wait to play as Thomas in another level to upgrade his stuff in that case.

There are also different types of pistols that can be equipped for different effects. When playing as the dual pistol wielding Ray, I put a Ranger or Volcano gun in one hand (long pistols that do a lot of damage but are slow to reload) and a Quickshooter (which fires and reloads very fast but does less damage) in the other. So I had guns for different situations. On the PC, when you are wielding two guns, the left mouse button fires the gun in your left hand while the right button controls the right gun’s trigger. It feels pretty natural after just a little while, though I still made a few mistakes in the heat of battle.

Eventually you will come across a boss type of person in your travels, normally at the end of a level or during a climatic scene somewhere in the middle. This means you normally get challenged to a duel, even if you are in the middle of combat with your opponent at the time. I’m not sure why guys like Ray and Thomas would stop a fight they are actually winning to get into a high noon type of duel, but they do. Gunfighter honor I guess.

Duels involve you walking around your opponent, trying to keep them in front of you so that when you draw your gun it will be facing them. But you can’t actually draw yet. You have to wait for the signal. When a bell sounds, you try to pull your pistol (using the mouse) and fire as quickly as you can. If you kept your opponent dead on in front of your gun during the prancing stage, this is pretty easy. You fire as soon as your rising crosshairs turn red, which normally puts the gun right over your opponent’s crotch. (Ouch!) And one good shot always instantly ends a duel. If you are too slow and get killed, the game lets you replay right from the start of the duel, so you don’t have to replay a level.

Thankfully, there are "free time" levels where you do get a bit of a respite. In these chapters you are basically holding up at a general store. The character you are playing can go inside and buy weapons or can look at posters advertising for jobs which lets you earn a ton of money. The jobs are things like hunting cattle rustlers or tracking down a famous bandit. You have to ride around a pretty big area to get to the job site, whereupon you normally have to fight it out with a gang. Along the way you will find random encounters with outlaws robbing people, abandoned houses and other interesting things if you look for them. It kind of reminded me of GUN or even FarCry 2 in these levels. I really enjoyed them a lot, and almost wish the entire game had this same free-form feel to it instead of the cattle chute it is most of the time. When you are done with the free time level, you talk to your brother and the story will advance as normal.

The game engine itself looks beautiful on the PC. Western towns look darn real as far as I can tell. People die in realistic ways too, with some of them kind of just walking a few steps and falling over when shot and others flailing around and hitting the ground spectacularly. There is nothing wanting in the visual department, and it’s rare when you can say that about a PC game. I’ve read some people complaining about some fuzziness in the console game versions, but on a moderately configured PC game system with a P4 single core processor and a modern ATI Radeon video card, everything looked beyond fantastic.

The single player game lasted just long enough that I think people will be pleased, though without the "free time" levels, it might have been a little short. So kudos again to Techland for putting those in there. When you are finished with the single player game you can always go back and play again with the second brother assuming you can remember which level you played with which character. There is also a really good multiplayer component that is very well done. It has some great maps and cool little extras like a bounty on your head that increases depending on how well you do. So a really good shooter is going to get a lot of bounty set against them, meaning more and more people will come gunning for them to collect the prize, kind of like in the real Old West. In practice this works out less well than expected because of the chaotic nature of a mass gunfight, but is still a neat addition.

In the end, Call of Juarez: Bound In Blood is a visually stunning game that also happens to be a very good shooter. I’d put it up there with the top Western-themed titles ever made. Neversoft’s GUN has a more open world which appeals to my RPG side, but Call of Juarez: Bound In Blood is an excellent shooter with a realistic, if closed, world. It earns 4 GiN Gems for being an exceptional title that will have you running and gunning for some time to come.