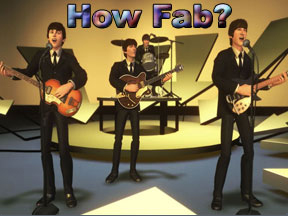 During a recent GiN Lounge Podcast about music games, I made an outlandish prediction that was kind of shot down by my guests.

So what did this crazy oracle say? I predicted that The Beatles Rock Band would be the best selling game of the year. I've seen The Beatles PR machine in action before and was confident that it would once again rise to the top and rake in millions. My venerable guests Todd Hargosh and Kelly Adams, who host their own show on GiN, The Gamer Geeks, both got that far-away look in their eyes that people sometimes do when talking to a crazy person. You know, the "just nod your head and back away slowly" look. When I went on to say that it might have the biggest launch of all time (which would mean that it beats Halo 3) or become the best selling game ever, they stopped backing away and started running. Surely I had lost it.

And who knows, I could be wrong. It's happened before more times that I can count. But I still think that I'm correct on this one. The reason is that while Kelly and Todd are experts on all things gaming, they tend to be a little myopic when it comes to their view outside the game industry. And The Beatles have a reach far outside our games-centric world. In fact, it is they who are reaching into the game industry in this case.

Over the past couple weeks, my opinion has not wavered on my prediction, and in fact has grown even stronger. Let's take a look a few reasons why.

Just this week, QVC, the cable channel that sells everything from blenders to cosmetics to shoes to wide-screen TVs, did a full hour devoted to The Beatles Rock Band complete with the ability to pre-ordering both the special edition and the normal version of the game on every console. And that event was simulcast over on the VH1 channel. It was actually kind of funny because the girly hosts of QVC like the stately Lisa Robertson were selling makeup before and after the show, and when the cameras came back to her, I could just see the "glad that foolishness is over" look in her eyes for a second.

But when was the last time that QVC sold any computer game? I think they might have had a package of games one Christmas or something, but that's about it. Never has an hour long show been devoted to a game as far as I know.

The people who watch QVC, or VH1 for that matter, are likely not the key demographic for most computer games. But here we have a title that transcends the game industry into the world at large. Remember that Myst was not a game aimed at the traditional gamer either, and we all know how well that did. And Myst did not have the PR arm that The Beatles are famous for as least as much as their music.

As another example a little closer to home: my wife Karen. To my dismay, she has never picked up my love of computer games. In fact, she hates most games and says they either give her a headache or that she simply can't sit still for hours on end to play them. But guess what? She is begging me to get Rock Band. This means having to upgrade our PS2 to a more modern platform like a PS3 or 360, but that doesn't seem to bother her. We have to get The Beatles game, in her opinion.

But I can see where Todd and Kelly are coming from. How great is the reach of The Beatles among the younger crowd, the 14-year-old boys who buy a lot of games? I'm not sure. Thankfully, I have not been 14 for some time. I would imagine that it's not as great a draw as something like Halo. But The Beatles have true universal appeal, and the fact that the game is being built around Rock Band, which is hugely popular inside the game industry and has always gotten stellar reviews on GiN, won't hurt sales either. Rock Band is the ultimate party game for groups of people, and The Beatles trumps that in terms of numbers with three singers, a drummer, a guitarist and a bass player. That's six people who can crowd around your TV and have a wonderful time. Things look darn rosy for this game.

So will my prediction come true? I think The Beatles being the number one selling game of the year is a pretty safe bet. As for the biggest launch or best seller of all time? I don't know. The game is a little expensive compared to a standalone title like Halo 3, though if you are just buying the game and not all the instruments, it's about equal. I think The Beatles getting the "biggest launch" title might be difficult as the crowd that loves The Beatles are not known for standing out in the rain at midnight. But as for the best selling game of all time? Don't count The Beatles out by any stretch of the imagination. Those four guys made real magic their first time around, and I bet they've got one more huge success left in them, perhaps more.