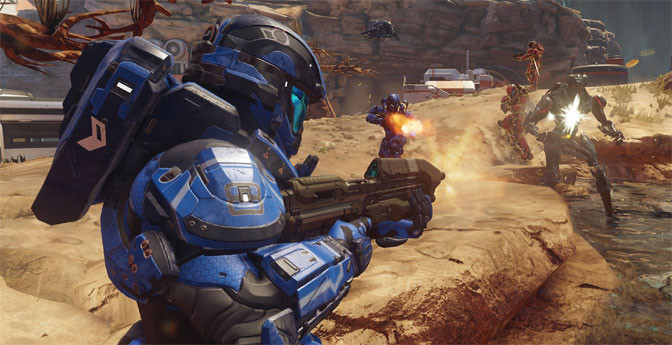 Before I get started on my review for Halo 5: Guardians, I want to provide an explanation of why it took so long to be posted. With all of the games that came out this holiday, some of which I am still trying to complete, it kept pushing back my time with playing Halo 5. Not only that, but I will admit something else as well. I never finished Halo 4. Though I have the game on my Xbox One via the Master Chief Collection, I was never able to finish it, and in order to get a full understanding of Halo 5: Guardians, I had to finish 4 as well as 5. I will admit that this might affect the final result of my review, namely its extensive delay, and for that, I apologize to each and every one of you who might be reading this, but I feel it’s best that in this era with its lack of “journalistic integrity,” I should come clean on everything.

And with that, on with my review.

Being the first Halo game to truly be designed for the Xbox One, 343 Industries did what they could to make it a memorable experience, and from what I’ve seen from them, they pretty much live up to the task. The story continues on with Master Chief, along with members of his “blue team,” searching for the truth behind Cortana, and with his belief that she is still alive after receiving a cryptic message, is now considered rogue. In response, Fireteam Osiris led by Spartan Locke are sent out to track him down. However, their search leads them to massive Forerunner constructs called Guardians that can destroy colonies.

The Halo 5: Guardians campaign takes place over the course of 15 chapters. However, as there are some chapters that are as long as they are in previous Halo games, there are also some that are just used as transition stages to carry on the story, as well as just to function as treasure hunts for unlockable data packs. It just seems a bit like unnecessary padding to extend the story.

However, on the missions where there is actual combat, it runs very smooth, maybe even smoother than in previous games. Not only is it a result of the new engine running at 60 frames per second (a first for the series aside from the MCC remasters) but the addition of “Spartan Abilities” speed up the action quite well. One I used quite often is during a jump, holding down the right bumper allows me to dart towards a target area with massive force. The combat feels quite good for a Halo game.

While the single player campaign is good, if a bit short with the padded chapters, it is again the multiplayer that stands out. The true highlight of the multiplayer is the new Warzone mode, where the objective is to capture three bases and either destroy the opposing team’s core or by scoring 1,000 Victory Points. The mode does feature its own version of microtransactions called REQ points, but they can also be earned in-game and during matches.

In addition, multiplayer mode in Guardians features 20 initial maps, with an additional 15 available as DLC. Thankfully though, 343 is going the route of CD Projekt Red and offering these maps for free. If only more studios would do this instead of nickel and diming gamers. I’m looking at YOU, Star Wars Battlefront.

Visually the game is quite stunning for an X1 title. As one who strongly believes the frame rate is more important than a game’s resolution, I back up 343’s decision to use a dynamic resolution system to keep the game at 60 frames per second. This has been done before with Call of Duty: Advanced Warfare successfully, and that continues here. May more studios take this idea into mind instead of mandating 1080p.

As for the sound, it’s the same great audio quality we’re used to from the Halo franchise, with the same great voice acting from Steve Downes (Master Chief,) Keith David (Arbiter,) and yes even Jen Taylor as Halsey and eventually Cortana. I know I’ve made fun of Cortana and her near mumble quality dialogue but at least I can understand what she says now. In addition, hearing the great Nathan Filion (in addition to seeing his digital likeness) as ODST Edward Buck is a treat in itself.

Sure I had my issues with Halo 5, particularly in the pacing of the campaign, but that doesn’t deny the fact that it’s a great game for the Xbox One and continues to sell quite well. Making over $400 million in the US in its first week, the series will still go strong. Hopefully Halo 6 can carry on the success.

Pros: 60 frames per second gaming engine shows what the Xbox One can do. Combat actually feels faster compared to past Halo games as a result. Dedicated servers for multiplayer. Additional Spartan moves now available for mobility and combat. Free DLC maps planned for 2016.

Cons: Some of the missions are just filler and transition. Game centers more too much on the Locke side of the story compared to Master Chief.