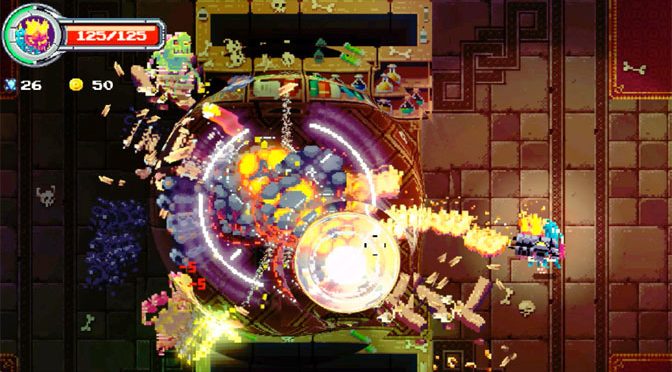 HELLMUT: The Badass from Hell

Roguelikes are hard. They’re supposed to be. One of the great joys the genre presents is being thrown headlong into an insurmountable challenge with little to no clue how anything in the game works — and dying.

Now before you say, “Wait, that doesn’t sound like fun,” there’s a catch. Most roguelikes offer players a way to make incremental progress and are, in fact, designed that way. You’re not supposed to succeed on the first attempt or even most go-rounds. 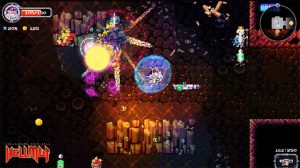 But as you play, you gather up resources, items and unlockables that give you the slightest edge for the next run. Combine with your ever-improving knowledge of the game, and it presents the chance to make it a little farther than the last time until you finally make a breakthrough and get to the end.

Hellmut: The Badass from Hell doesn’t do this. At all. In fact, the only way to unlock a new character is to beat the final boss. You can unlock characters temporarily during a run, but if you die — and you will — you’re out of luck. The developers’ decision to lock game-changing content behind what turns out to be a massive difficulty wall means that a good chunk of the game will remain inaccessible to most players.

And it’s a shame because the parts of Hellmut that are accessible from the beginning lay the foundation for what could have been an addictive roguelike. Snappy gunplay, colorful graphics and clever, procedurally generated environments bring all the ingredients for what should have been an enjoyable experience. 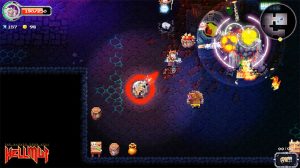 But Hellmut taunts and teases you, allowing you to play as characters you unlock in challenges during a run, then snatching them away just as quickly. What’s worse, the characters are terrific, altering gameplay in a way that feels fresh and exciting. That the game leaves you stuck with the starting two characters until you can get to the end pours salt in the wound once you’ve had a taste of what its other content has to offer. 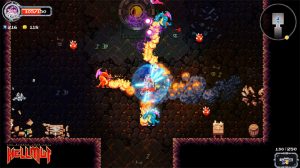 Each character has a unique play style and abilities, and grabbing guns to strategically use during your run offers an element of strategy. Saving your hardest-hitting weapons for an area boss could be beneficial, but if you die before getting there, they aren’t much good. It’s not particularly deep, but in a game based on twitch reactions, the strategic elements do enough. 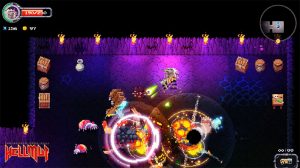 Visually, Hellmut sends splashes of color everywhere and leaves players in a frantic rush trying to avoid imminent doom. It does a great job keeping the action flowing, with smooth animations and projectiles filling the screen.

There’s a lot to like about Hellmut, but the unfortunate truth is that it’s difficult to see most of it. Roguelikes are designed to challenge players and push them to be better; Hellmut feels like it’s punishing you.