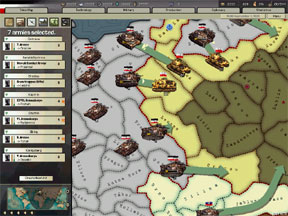 It is always fun when a company lets us test out a beta of a new game. Well, almost always fun. Thankfully, in the case of Hearts of Iron II, it was a lot of fun.

Since looking at the original game and recently the platinum version, you all probably know how I feel about this series. It really revolutionized the entire strategy genre when it came out in 2003, and especially the World War II genre. Never before had a game exhibited so much complexity and control over your nation. If you ever played the old Avalon Hill war games, the really complex ones on the hex maps, then you have a good idea what is involved in the original HOI. But with such complexity came great rewards.

Being able to play any country in the world from the all-powerful United States to the power-hungry Germany to tiny little Luxemburg was pretty interesting. If you played a small country there was not a lot to do before someone’s war machine came in and took you over, though this was realistic.

And when I say you run your country, I mean you run every aspect of it. You have to keep the people on the home front happy, manage your technological infrastructure, support your troops, cater to and make allies and run your grand wartime strategy. It is all very intense and not an easy endeavor. The original reviewer said it was the hardest game to learn he ever played, and I know for a fact that he plays a lot of strategy games. He did say the game was also one of the most rewarding. So it was a get out what you put into it type of situation. Here is a link to the review if you are interested.

I rated the platinum version of the game quite high, because it really helped to shore up a lot of holes with the artificial intelligence and also made the game more stable.

When I was given the beta version of Hearts of Iron II, I have to admit that I was skeptical. I mean, I had just reviewed the platinum version about a month ago. I did not think very much could have changed with this sequel. But boy, was I wrong.

The first thing you will notice is that the graphics have been overhauled quite a bit. You still have the detailed maps that made the original so fun to play, but they just look better, with more readable fonts over each country and a much cleaner environment. Each of the various units are now very detailed as well. German tanks look different from Russian ones and even different models within the same army appear different. And everyone, even strategy gamers like myself, deserve a little eye candy.

If HOI2 was mostly cosmetic though, I would not be so enthralled. In general, the game is a lot deeper than the original. Everything you could do in the first you can do here, but to a much greater degree. Since we just went through a pretty tense election in this country, I will use the games political system as an example. In the original you could slowly, though various events and cabinet appointments, change the way your chosen country thinks. Now however, you can tilt the entire political base of your country. Those of you living in the United States probably think that sounds a bit too familiar. There is a really detailed help system in the game as well, so you never feel out of your element when relief is just a click or two away.

The heart of Hearts of Iron 2 is not really iron, but combat. In this area many changes have been made to help fix the game. Right off the bat you will notice there are many battle scenarios in addition to the normal campaigns. These battle scenarios have limited objectives and can be played in one night or a couple of hours. This is opposed to the grand campaigns that can take days or weeks to finish. So depending on how much time you have, there is a game for you here.

There are also many little combat tweaks. Aircraft carriers now have integral fighter units assigned to them, so you don’t have to worry about sending in a new squad which slowly suffers attrition or simply sail them around as big targets drawing fire away from your more useful ships. Carriers are supposed to be the kings of the sea, and they finally get to show that here.

Also land movement has been simplified and improved. Instead of waiting months for an attacking unit to get all the way to the center of a territory for a battle to start, it begins as soon as you set foot across the border. If you win you still have to march all the way inside to control the territory, but if you lose you can back out right away. This speeds up gameplay immensely, especially when you are playing at a reduced speed, so that you don’t have to wait 15 minutes for a battle to begin, or forget why that particular battle was an important part of your strategy by the time it is fought.

The air and sea war elements have also been cleaned up. You no longer have to micromanage your fleets and aircraft. You can assign them general orders like hunting down enemy merchant shipping and let their commanders do the rest. This prevents a serious case of unwanted micromanagement on a global scale. Your commanders are there for a reason now other than just a combat bonus. Better commanders follow your orders better, so keep your smart ones save and save the suicide missions for your low-ranking fodder.

This is only a beta, so I won’t go and give it a detailed score. But generally betas only get better as they progress. If Hearts of Iron 2 continues along this same track, we could very well have a perfect 5 GiN Gem Title on our hands.