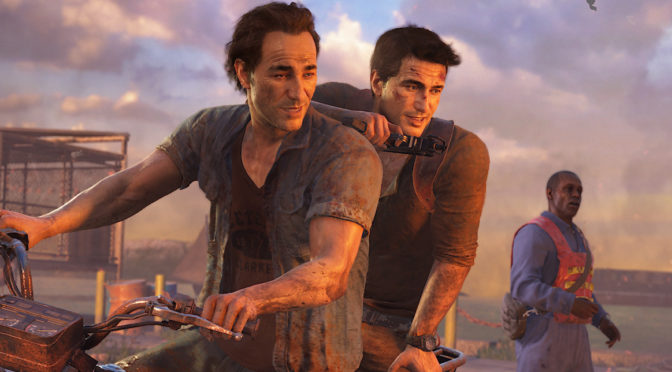 The thing about Uncharted games is that they’re ‘unputdownable’ (technical term) and Nathan Drake’s swansong, Uncharted 4: A Thief’s End stays true to form. Like its predecessors, it moves from weighty, emotional scenes to breathless set pieces with ease, ensuring you always want to play a little bit more. However, the balance of combat, storytelling and action may be a bone of contention for some.

This will be a spoiler-free review, as long as you’ve seen the trailers. That said, Uncharted 4 begins with Drake in a regular job. He and Elena are trying to put the days of adventuring behind them and have a good stab at married bliss.  However, when Sam, Drake’s older brother (presumed dead), turns up on his doorstep with stories of a pirate treasure and a price on his head, Nathan front-tucks his shirt once more and heads out on one final adventure.

A Nod to The Last of Us

First, Uncharted 4 is the best looking game to hit PS4. The level of detail is breathtaking, which is something that seems to get said all the time, but for this game, it’s really true. I took so many pictures, in picture mode because it almost felt like I was on holiday in Madagascar or the Highlands of Scotland.  You will stop and stare at some point on every single level – it’s that gorgeous.

A Thief’s End owes a lot more to Naughty Dog’s other masterpiece, The Last of Us, than previous Uncharted games. The beautiful settings, full of intricate details of the lives living in that world, made me expect to see Ellie and Joel pop around the corner. But also the sense of companionship, almost all the way through, gave us more The Last of Us moments.

During downtime, exploring rooms, you can unlock optional conversations, such as questions about Sam’s time in prison or Drake and Elena chatting about their relationship. And Drake is almost always in company, giving him time to reflect with them and keep those scenes more interesting.

Overall, there is a much quieter feel to Uncharted 4. The action is cut up by long periods of exploring, which gives the game more of a narrative adventure feel, than an action adventure. The action is still there and it’s brilliant, when it hits, but there’s a confidence here, which means Naughty Dog isn’t relying on pacey gaming to keep us interested.

It pains me to admit it, but I wasn’t always quite as interested as I have been in previous Uncharted games. A Thief’s End definitely felt longer than all the other games. Just when I thought I was entering act three, it turned out I was only halfway, which was a  good and a bad thing.

Over the course of the series, we’ve come to recognise the beats of a Nathan Drake experience. Here comes the car chase, here’s the epic climbing sequence with falling bits, the chase on foot, the emotional bits and the narrative turning point. In short, Uncharted is formulaic. That’s no secret, yet it always manages to stay fresh because the characters are interesting and the set pieces switch things up.

However, I felt like Uncharted 4 was long, not because the story needed space, but because there was padding. If this was a film, I’d be saying cut some of the driving and climbing sequences to make it tighter.  As much as I enjoyed the view (and I really did), I just wanted to get on with the story.

When it comes to gameplay additions, Drake now has a grappling hook, which offers even more scope to levels. Later on, he acquires a climbing axe, which allows him to traverse sheer surfaces, as long as they have the right texture. And, finally, the new slide feature means Uncharted 4 has a lot of shale and scree slopes. Drake and co have a series of inclines to slide down, bringing new complexity to the jumping and climbing sections.

Considering the amount of climbing, it felt easier than previous encounters. I missed the thrill of the train falling over the cliff, the sinking cruise ship and the pure cinema of most of Drake’s climbing experiences, which left my heart in my mouth. In comparison, Lara Croft’s climbing sequences felt staid and safe to me, but, sadly, Uncharted 4 has followed in Tomb Raider’s footsteps, which is a shame.

Kill or Be Killed

The levels of Uncharted 4 feel vast, with time to explore all the nooks and crannies. The multiple layers and varied types of cover  are a gift for multi-player fans, who now get to use the grapple to zip out of danger and surprise enemies. From crumbling pirate towns to Madagascan outposts, these levels also create great playgrounds for the single-player combat, offering a range of options for finishing off the enemy.

On the plus, the welcome addition of stealth means Nathan Drake’s death toll isn’t quite as high as it has been. A brilliant section at an Italian villa sees Drake creeping over rooftops, trying to escape without getting seen. There’s more than an element of Assassin’s Creed in these moments. Enemies have levels of awareness, but handy patches of long grass or a hiding place behind a barrel, means they lose your scent and return to their lookout. Or you could just go out all guns blazing.

All About Story and Character

Despite the niggles over pacing and length, Uncharted 4: A Thief’s End is a fantastic finale for a brilliant series. When it’s good, it’s awesome. The car chase shown off in the trailer is one of the finest gaming moments I’ve played for a long time and had me, literally, whooping with joy. But it’s not the only highlight, as the game whisks you from a South American prison, to the wilds of Scotland, hunting for treasure, navigating puzzles and climbing clockwork towers among tropical islands – this is classic Uncharted.

However, Uncharted is really about Nathan Drake and his relationships with the people close to him. A Thief’s End is about Nathan’s struggle with obsession, loyalty and betrayal, as well as his commitment to Elena. Unfortunately, Elena is absent from huge chunks of the game, but the scenes they get together carry the most emotional weight, nuance and humour. Surely, Nathan and Elena are gaming’s greatest love affair. I have to praise Nolan North (Drake) and Emily Rose (Elena), for their superb voice acting all the way through.

Sam is the newest member of the team, but he’s by no means flimsy, as a character. The first third of the game focuses on flashbacks to Nate’s childhood with Sam, so we believe in their relationship, which is central to this adventure. And of course Sully gets some of the best lines.

Nadine Ross is one of the most interesting baddies the Uncharted series has had, but she was tragically underused. I wanted to know more about her, but she was nothing more than a narrative tool, which was so disappointing, as she’s the only character of colour and had an intriguing backstory.

Although it’s sad to see Nathan Drake’s story come to an end, the time is right. Nobody wants to see one of gaming’s most loveable characters trading on past glory, to climb yet another rusty drainpipe or kill an endless supply of goons. He was running out of mythical cities to discover, anyway.

Uncharted 4: A Thief’s End may be flawed, but its moments of brilliance far outshine those niggles. This is a series that’s going out, when it’s still at the top of its game, which means you get to see Nathan and Elena’s story coming to a satisfying conclusion that makes you so glad you went along for the ride. Just like the Uncharted games, for all Nathan’s faults, we still love him, right to the bitter end.

Check out our spoiler-free highlights gallery for Uncharted 4.

One thought on “A Grand Finale for Uncharted 4: A Thief’s End”