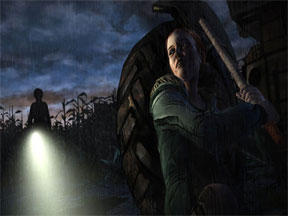 Zombies are incredibly popular now in film, novels, books, comics, television and of course video games. As you all probably know, the wizards at Telltale Games created The Walking Dead series, based on the TV show, which is based on the graphic novels. The Walking Dead video games offered some of the best storytelling of 2012 as Lee tried to keep little Clementine (and himself) alive through five adventures delivered as downloaded content packs. Each DLC built on the ones before it, with choices made affecting the world and the characters throughout.

That adventure was such a success, that there are plans in the works for an entirely new series within The Walking Dead world. Presumably, like the original games, this one will not feature characters from the TV show, except for in a few possible cameo roles. That way the game isn’t tied to just doing what we’ve already seen before, but instead allows exploration as another group of survivors attempt to live through this terrible zombie-infested world.

In the meantime, Telltale has released 400 Days, a standalone DLC (which does require the first Walking Dead core game to be installed) that is supposedly tied into the pending series. It’s called 400 Days because that is the time frame relative to the first infection where the episodes take place. There are five survivors in this game. One story begins just two days into the infection, which is a lot like how you began with Lee, while others take place several hundred days into the madness. Generally, the farther you get into the infection, the more zombies there are, though the first few days are also quite chaotic.

All five of the stories take place either in or around a truck stop, though they don’t all actually touch it. Most do however, and marks you leave as one survivor on the place end up as a curious mystery to others who come by much later, which is a nice touch.

My biggest problem with 400 Days is that it’s incredibly short. I blocked out an hour of time to get into the game, figuring I would write about my first impressions and then go back and do a deep dive later on, a reasonable assumption given the size of the DLCs from the first series. Only at the end of the hour, I was completely finished with the main story, having played through all five adventures. Another ten minutes and the finale was finished too. That’s incredibly short, even for a DLC, and even for a game that only costs a few dollars.

Each of the five stories, depending on how you play, takes between five and fifteen minutes. You start off with a bulletin board showing people’s pictures. As you play each person’s story, you remove the photo. I honestly thought I was just playing a prologue and after the short little time with each person was over, the real game would begin. And I guess it kind of did, only the "real game" was simply a conversation which was actually shorter than any of the previous tales!

Basically, depending on the choices you make with the five characters in their stories, they will be more or less likely to join a new town being created in the game. This is also influenced by a sixth character, a recruiter you play in the final part of the game, and what you choose to say to convince people to join you. Then at the end you are told how many characters out of five choose to join you. Supposedly this choice will be saved and have something to do with the next series.

The actual game itself was good, and typical of the type of thing you found in the original series. You will have to determine who lives and who dies at times, if you want to perform evil or good actions, whether to lie or tell the truth, and what is important to the lives of the characters. Given how short each story is, it’s a real testament to the storytelling ability found here that you actually care about what happens.

On the negative side, on two occasions I clearly wanted to make a choice that was not available to me. In one case you can choose to walk away from an evil act, but have no ability to try and stop it. In a second case, again, you can choose to do something really bad or escape, but I found myself wanting to do more to try and save a woman presented as your best friend. In the second case you happen to be armed, so you could attempt a rescue, and I think your character might have done so, but that choice isn’t presented. But in every case, the dark, hopeless world of The Walking Dead shines through.

One minor boost for those who count is that you can earn two trophies in the game. I’ll even tell you how. First, you have to win a game of rock, paper, scissors, when playing the character named Wyatt, which some folks have said is difficult, but which I did on the first try. I may have gotten lucky. Secondly, you can earn a cool one, and get "reunited" with someone from the original game by playing Russell and choosing to hide when he first sees a truck driving up the road towards him.

While I enjoyed my short time with 400 Days, I think it’s a huge mistake for Telltale to release a title with such little content. They have made good money and earned respect selling episodes for games as DLCs. It’s pretty much their business model, and not just with The Walking Dead but also games like the Back to the Future series. People trust that the DLCs are not only going to be good, but a good value. And 400 Days fails on the second count. If it were released as a free game to help promote the coming series, it would be amazing. If it were on sale for $2, it might be an average value, I guess. But for $5 for so little content, it’s asking a bit much. The danger is that people will feel cheated with the length, and be less apt to pick up DLCs from Telltale in the future.

As it stands, I enjoyed my time with 400 Days. Everything in the game is quality, but like food during the zombie apocalypse, there is not nearly enough to go around.