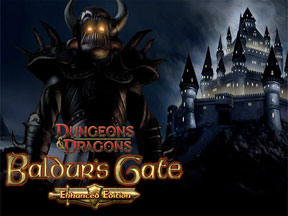 Being a longtime RPGer, I tend to keep games that have meant something to me over the years, and Baldur’s Gate is no exception. I still have it and all its expansions and sequels sitting on the shelf in my game room alongside other valued titles like Myth, Thief, Jagged Alliance, Stronghold, Fallout, Morrowind and Vampire The Masquerade: Bloodlines. But Baldur’s Gate takes up the most room, with all the expansion packs and sequels. And it was pretty amazing back in 1998 to be able to create a character and then take them through all those games, growing in power and influence from a level one whelp to, quite literally, godhood.

Every now and then I get the notion to load up Baldur’s Gate once again, to start over and replay the entire series from the beginning. I started doing that once, but the old game has trouble working perfectly on modern systems. You can get it to run, but it takes some tweaking. Also, like an old friend you haven’t seen in a while, you tend to forget some of its flaws until it’s back in your face once again. Nostalgia can erase a lot of ill-will over time. Such was the case with my previous return into the series using the original game disks. I never got much beyond Candlekeep.

So I was pretty happy upon learning about the enhanced edition of the classic game, being put together by Overhaul Games. The guys at Overhaul are becoming specialists at taking older games and making them work on modern hardware, along with bug fixes and new original content, having previously worked on MDK2 HD. If only I could get them to turn their attention to Vampire The Masquerade: Bloodlines (please, please).

For this review, Baldur’s Gate: Enhanced Edition was downloaded from the Beamdog online service. For PC and Mac users, the cost is $20, which includes four DLC packs for things like extra character portraits, the Black Pits combat arena, and three fully-voiced, backstory-loaded and romance-capable characters. Android and iOS gamers can get the game for half the cost, but must purchase the DLCs separately for $3 a piece, so it just about evens out in the long run. The new characters are some of the best parts of the game, so I would highly advise having those DLCs if nothing else. Only one of the NPCs is included in the iOS version of the game without an extra purchase.

The first thing you will probably notice with the Enhanced Edition, besides the fact that it runs perfectly in a widescreen orientation, is that most of the enhancements from Baldur’s Gate 2 have been added. That means your character choices are pretty vast, and include things like the swashbuckler thief, the specialist mage and the caviler type paladin. A lot of us who played the original missed on these choices because they started with BG2 and we were importing our character from the original. So I was able to play the archer character under the ranger main type, and it was awesome. Overhaul plans to release the entire Baldur’s Gate series, or at least a lot of it, so it makes sense to go ahead and bring in content from BG2 right from the start.

You will also notice a bunch of other little fixes in terms of the interface. Scrolls of the same type now stack together, so three fireball scrolls will all go together and not take up the same inventory space as two shields and a suit of armor. Arrows also, thankfully, can stack to 80 instead of 20, something I was really overjoyed to find since I’m playing an archer. Now I don’t have to devote every spot in my pack to arrow-carrying. In fact, I can have 240 shots loaded inside my quick use area (80 times 3), assuming they are all of the same type. The descriptions of spells and abilities have in some cases also been tweaked so that they make more sense, a real boon for someone coming into the series cold without any knowledge of the sometimes quirky early editions of Dungeons and Dragons.

Surprisingly, the graphics are about the same as before, (I played the original and the enhanced versions side by side for a bit) though they are surprisingly good for a game originally created in 1998. It’s a storybook-looking 2D world. Some of the cutscenes and the chapter-break movies have been enhanced by Overhaul, which adds a little extra flavor. I suppose the good thing about the graphics is that they expand perfectly over a widescreen, and the characters flow well over the environment. Pathfinding also seems to be improved, though this could simply be the effect of a modern computer able to ‘think’ much more quickly and more efficiently to direct your party where you want.

The new characters are seamlessly integrated into the story to the point where I could almost believe that they were there originally. They include Rasaad the monk, Neera the wild mage and Dorn the blackguard.

Of the three, I didn’t do a lot with Dorn because, well, he’s evil, though it’s nice that evil parties have a powerful and cool new friend to bring along. My favorite however was Neera, who is a powerful mage with the slight problem that her wild spell casting can sometimes backfire or sometimes produce different effects than intended when a wild surge happens. She might end up healing an enemy, or dropping a nuke down on a single hapless kobold when trying to cast a simple magic missile. She is voiced by actress Nicola Elbro, whom I’m told has never done any video game voice acting before. But let me say right now that Elbro does an amazing job with Neera. She’s as funny and as comical as Imoen without being annoying. My favorite saying of hers has got to be ‘Eat flaming, or possibility frosty, DEATH!’ The dynamic of how to use wild magic is also pretty thrilling, though you will need to reload some if she inadvertently causes party death. She’s quite the NPC, and it’s nice that you can romance her as well.

Rasaad is by contrast a very even-keeled character, perfect for a monk. Monks can become some of the most powerful characters in the game at high levels, but their restrictions on everything from armor to weapons makes them kind of dull as a player choice. To have a monk with a good backstory as an NPC though, is pretty darn cool.

All three of the characters can be found early on in the game, so you would be foolish not to pick at least the alignment-friendly ones up. The only thing that I wish Overhaul would have done in light of the new NPCs is to de-couple some of the forced pairs from the vanilla game. Nobody is going to want to adventure without Minsc and his space hamster Boo, but the addition of Neera makes Dynaheir unnecessary. Other pairings like Khalid and Jaheira may also get in the way of a six-person party with new NPCs. You can of course use the old cheat method to get rid of someone like Dynaheir. Simply go to a house or a map that you don’t need to return to and move Dynaheir off to one corner. Reform the party and simply leave the map (its why small houses work well) before she can walk over and talk with you, taking Minsc away. The barbarian won’t mind (you still do have to rescue her initially) because, I don’t know, you probably told him he was fired or something. It would just be nice to not have to cheat fire someone (or get them killed, another option) to get a party like Imoen, Neera, Rasaad, Minsc, Branwen and your main character.

That little trick to un-pairing characters goes to show that even though Overhaul did make Baldur’s Gate work with modern systems, that it’s still the same game at heart. All the little secrets from the vanilla game made it into this one. Yes, that hidden ring of wizardry is still under the Christmas-tree-looking pine outside the Friendly Arms Inn just waiting to be picked up. The biggest question might actually be what Overhaul plans to do with Baldur’s Gate 2. If they stick to the rigid plotline (and one of the most controversial aspects of the series) then several characters are set to die between games and Imoen is going to force dual-class into a wizard (stupid). And where do all the newly created NPCs fit in? I talked with the folks at Overhaul who said that all three new people would be making the jump to future games. Does that mean that the romantic twists of BG2 will now become triangles? Time will tell I guess.

There has been a lot of talk as to whether or not the Enhanced version of the game is worth $20, when you can buy the old game as a download for less than half of that. I would say, yes. The new NPCs with their strong backstory and voice work are worth the price of admission, as is all the bug and convenience fixes. The other DLCs include The Black Pits, which is a combat-only mode that those who like to fight might enjoy, and some new character portraits that in my opinion don’t really fit into the original style. The new NPCs are the gold here, certainly.

Also, the game would be so much more popular if it wasn’t restricted by licensing to just the Beamdog download service. Nothing against Beamdog, it works fine, better than Steam in many ways, but letting the game out to GOG and Steam would probably make it a million-selling title fairly quickly. I hope they consider doing that at some point.

The original Baldur’s Gate won the Gameindustry.com Game of the Year award back when it was released. And while the Enhanced Edition probably won’t follow that same track (though anything can happen when you vote) it does serve to remind us why the game was such a phenomenon, setting the course that RPGs would chart for years to come. Kudos to Overhaul for such great work bringing an old friend back to us. This is one to be enjoyed all over again.