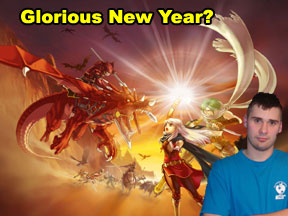 I’ve been playing games all my life, but surprisingly find that the ones I follow don’t always match up with what the other reviewers and writers here at GiN like. I guess we should be thankful, because there are games for everyone and anyone in the game industry these days, from casual fare to hardcore action titles, light puzzle adventures to deep hardcore RPGs. So here are the ones I’m looking forward to most in the coming year, and which I think will be grand successes to boot.

The year 2012 brought to a close with the No-pocolypse and some snowstorms in the Buckeye state, capping off quite an interesting year. As Todd has pointed out in his awards segment, we have seen some good, some bad and some really ugly games. Instead of looking back, I want to look forward with some games I’m excited about.

More specifically, I want to talk about three games that are new installments into my favorite series. These are games that I’ve always mentioned every chance I get, and stand behind one hundred percent.

Let’s begin with Lightning Returns, Final Fantasy XIII. Mark my words, I will own this game as soon as I can. Each teaser I’ve watched has got me more and more pumped up. The graphics look fantastic and the story seems fantastic. The battle system looks very interesting and well developed.

As a writer, I look at the story and character of a game more than I do graphics. Lightning is my favorite Final Fantasy protagonist…ever. Having her back in your party is a big uplift. The story consists of the world ending in a set number of days, and your actions will speed up or slow down the Armageddon clock. I really love the concept and think it’ll add a whole new dimension to an already stellar series.

Next we turn to Gears of War, Judgment. I love this series to death, but it just pulled a Halo on us. Gears was only supposed to be a trilogy, and yet we are now looking at a fourth game. Nevertheless, I’m glad I get to use my favorite character (Damon Baird) as the main guy. Hopefully it’ll keep the high octane power going from the third game.

This will be the first game without using Marcus, so it’s important to make a first impression. Of the Halo games that didn’t involve Master Chief, they are only one for three among fans. I have faith in Epic though, that they will make Gears of War, Judgment a great game to buy.

Finally we get to my favorite series of all time, and the game coming out this year is Fire Emblem, Awakening. I like this one above even Final Fantasy and Resident Evil. I have beat Fire Emblem: The Sacred Stones over forty times, and I love the series. I’m even more excited that the new installment of this series is expected to launch on my birthday.

I watched a trailer and I want to give the five stars already! (I won’t, but it’s tempting.) They brought back that old Fire Emblem feel, as well some fun new mechanics. Nintendo is kind of tight on details, but overall I think this could well be my highest scoring 3DS game. Fingers crossed on that one.