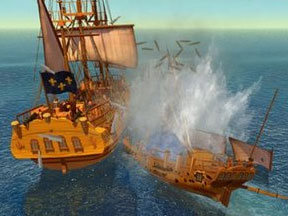 Pirates of the Burning Sea

Pirates MMO Tough to Start, But Offers Much

I saw an ad for a Massive Multiplayer Online (MMO) game called Pirates of the Burning Sea (PotBS) many months ago online when I was crazy busy studying for a Microsoft certification upgrade, and I mentioned it to my editor as a game he (or I) might be interested in trying out. Then I promptly forgot all about it. And then about two months ago, I was handed a box at our weekly staff meeting. Having no other major project on my list right now, I figured it was a good time to take on a 2nd MMO (I and several other GiN staff are playing Lord of the Rings Online together).

Pirates of the Burning Sea is a MMO set in the Caribbean during the heyday of the pirates, the year 1720 to be exact. You can play on the side of the English, French, Spanish, or of course Pirates. If you choose one of the nations you can either be a Naval ship Captain, a free trader or a privateer. If you chose the pirates, then you’re a pirate. The main differences between them are that some ships are restricted based on your choice. For example, big military ships would only go to naval captains, while huge cargo ships would only go to free traders.

I installed the game on a Thursday evening, with the intention of playing for a good six or seven hours on a Friday afternoon. Sadly, most of that time was taken up by the patching process which I found annoying not because of the patching, which is a standard with MMOs, but because I could not figure out how long it was going to take. At the time I could not find a percentage or total progress bar. So I went off and watched TV and peeked back every once in a while to see if it was done.

Once the update process was complete I got online and went through about six servers all named after famous pirates before I could find one that would actually let me join. I was a tad bit frustrated at this point because I felt that they could have at least ordered the servers based on which ones would allow you to join.

But I was much more frustrated the next time I went on to play when I could not remember which server I had actually managed to get on the first time, and as far as I could see, the game did not have any indication of what server I had created a character on. Listed on the server selection page next to each server is the strength of each faction on that server, which I thought was helpful in making your character selection, especially if you are into player verses player (PVP) fighting.

Once you get on and begin to create your first character you have a choice of nationalities and under each of the three countries you have three choices for occupation. These of course effect your options from customizing the look of your character. I chose a female English privateer and dressed her in a sexy/revealing black shirt; pants and boot combo with a red sash that I thought would be fun. Before creating my first character I tried out all of the options and I think the variety of customization (clothing and body style) is really good.

Once I was ready I entered the world and began my introductory instance. You start on a ship that is being attacked, and the captain is dead so you’re now in charge. So you have to get out there and clear the decks. My first problem was getting around. In 1st person I am used to moving in the direction that I am looking, but in Pirates, movement is based on using the keyboard and it does not matter which way you are looking.

Once I got outside and into combat I did pretty well. I was not exactly sure what I was doing but the bad guys came at me one at a time for the most part and I was able to keep hitting the attack buttons and taking them down. And the game does a pretty good job of pointing you in the correct direction for whom you need to speak with, at least in the instance. Once your ship is clear you switch to ship combat and take out the attackers. Once you have won you enter the real world at the starting port for your nation. If you want you can redo the instance or move on to another introductory instance where you will learn more about ship combat and attacking a fort. There are other tutorials including one on the economy that can be found as you explore the town.

The interface has your standard health, experience, quick slots, city map, world map, quests, etc"my only comment with the interface is that I thought it could have been better designed; it just seemed like not enough time was spent thinking about how everything fit together and to make sure there was enough space available for quick slots. As such, everything became a bit cluttered. The one thing that I did like was that your quick slot bar automatically changed from ship combat to close combat depending on the situation.

I found the swashbuckling combat to be terrible. I never got the hang of this and found it to be just button mashing and waiting for the cool down timer to stop so you could use that skill again. I know that there is probably more to it like using skills in combination, but as I said, I did not get there.

On the other hand I found ship combat to be really great. The view angle being separate from movement here really paid off well for me. You have to take a lot into consideration as you are fighting — such as the facing of the ship, wind direction, range, speed, and hull damage. You can actually have different shots loaded into each side of your ship. Also the AI for your allies did an excellent job in combat.

Once you figure out how to find them, the missions can be a lot of fun. My first mission was to attack 10 French ships. Other missions include protecting merchant ships and seeking help translating a treasure map. For better or for worse, the missions are sorted for you by what ever is closer. I am of two minds about the usefulness of this.

For me the economy system was too confusing and I gave up trying to figure it out. Reading up on it outside of the game it seems like you can setup your own warehouse and factories. That is pretty cool if you are willing to take the plunge. There is also the standard MMO auction house.

The graphics are nothing stellar, but everything flowed with the Caribbean of the 1720s theme. The most noteworthy thing is the detail when you zoom in on your ship during combat and you see your crew up amongst the rigging. It did strike me a little off that the town’s people are stationary.

Within the review period I did not get to participate too much in the PVP action, though I did taste it a bit. Some of the towns along the Spanish Main can be destabilized by completing special missions such as killing NPCs or destabilizing the economy of the port which earns destabilization points for your side. Once one nation has accumulated enough points the port goes into contention and a PVP zone appears as a transparent red circle around the port. At the first level of contention (5000 points) Pirates and Privateers with the right skills can then swoop in to try and gain control of the port city. At a higher level of contention (7000 points) the zone is open to all players. Once the port reaches the highest level of contention (10,000 points) the port remains in contention for 48 hours while all sides try to gain as many contention points as possible which will help them in the upcoming port battle. During the port battle, final control of the city is determined. If the pirates win they get to loot the city for three days after which it returns to the control of the nation it started with. If one of the other two nations wins, it then becomes theirs.

Really, this seemed to be the heart of the game, so PvP players will probably have a better time here than those that like to cooperate and adventure in solo style.

Overall – I had a rough start the PotBS and I never recovered from just feeling lost and being unsure of what to do or where to go. I would have stopped playing sooner, but I forced myself to continue because I wanted to at least try out everything that I could for this review. Some aspects of the game are really good and if you are into the genre or pirates and sailing ships, then you will make the extra effort required, and I expect you will fall in love with this game. PvP and ship combat are the real strengths here, with the land-based MMO play that is standard most places taking a big back seat. Plan your voyage accordingly.