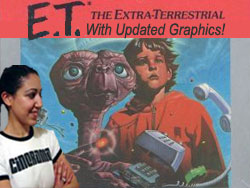 Well, I've survived another Glastonbury Festival. There was minimal mud (only one day this year) and it was hot, but not hot enough to cook the contents of the loos, so summer stench was avoided. Other than that it was a happy concoction of cider, friends, dancing, fantastic rock music, feather boas, petticoats and hippy mayhem.

Meanwhile, back in the world of games, a whole heap of nothing has happened. I guess people have got better things to do than play games – or so publishers think. Having a look at the coming soon lists on various websites, is a sad affair.

You know when Kung Fu Panda is one of the highlights of your summer; things are getting bad, really bad. Because I've got a philanthropist streak a mile wide, I've had a quick scan of this summer's schlockbusters. Some are okay, some are bad and some make you wonder what we've done to deserve this. Almost all are destined to be dropped down the long-drop loos at Glastonbury.

First up is Soul Calibur IV, which is the best of the bunch, I have to admit. I know, I know, Soul Calibur rocks blah blah. That is all well and good until you have a guest appearance from Darth Vader. I'm sorry but that's just lame. However, Namco has gone one step further and included Yoda. It was bad enough watching Yoda in a light sabre fight in the movie, without being put through it all again. I mean, how agile can a Muppet be? It all stinks of marketing being used to sell us a whole load of bunkum, so what's new?

Second on my list of proof that summer is a silly season for the games industry, is Beijing 2008: the Official Video Game of the Olympic Games. Oh my good god! Who buys this stuff? Sifting through the non-sports at the Olympics is one chore I don't want to bring into my gaming world. Do I want to play water polo? No. Do I want to play water polo on my games console? Even more emphatically, no! Really people, if you're this desperate, maybe it's time to play an actual sport.

Space Chimps – yes it is a game and yes, it's coming to a console near you, this summer. It's based on the, apparently, hilarious animation movie, due out this month. Excuse me if I withhold judgement on this one. The movie is voiced by people I've never heard of and the screenshots are less than inspiring. In fact, I'm thinking this could be a one trick chimp, in the vein of, "look at the simian in the space suit, heh funny."

And if you're really bored, there's always Euro Truck Simulator. Wait for it, it's better than you could possibly imagine. Drive across Europe, on accurately rendered roads, carrying various cargos and delivering them on time. Yup, that's it. Hold on, but isn't that an actual job? What's next, Office Manager Simulator or Stock Control Trainer, exclusive to DS?

It's official, kids, summer has started and you either go out and do something more interesting or take this time to invest in the games you bought last winter and haven't finished yet. I think we can safely say it's time to save your gaming pocket money and invest it in something worthwhile in the autumn.

Most played: Latrine bingo at Glastonbury