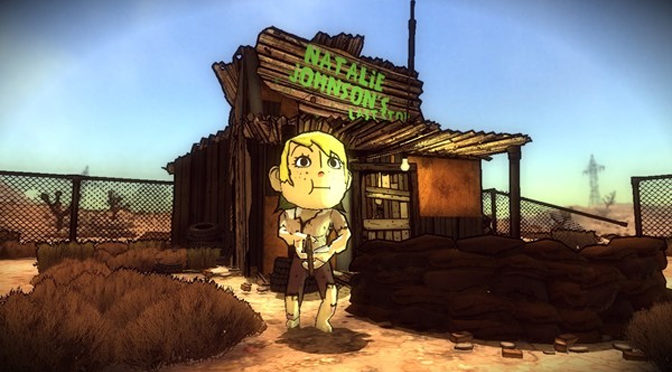 Wasted is a  game that fits the typical post-apocalyptic genre. The game itself has a weak story, no real plot, and characters that were pretty much one-dimensional.  The story also felt rehashed from other post – apocalyptic tales.

The Borderlands style characters were fun and humorous. Throughout the game the player goes around the  wastes killing enemies and looking for radioactive booze.  A game full of good fun and entertainment.  One downside that I did not like that my character created in the beginning when killed in the first cooler mission from radioactive goo spawned as an entirely new character. This was  disappointing and annoying. Then again this happens every time the player dies.

The main plot of the story is a nuclear war occurs in the 1980’s and made the Earth into a wasteland.  To save humanity’s knowledge and culture the top minds went into shelters known as the coolers. Due to radioactive leakage they perished and only the toughest of humanity on the surface survived. Though the game portrays the survivors as being not too bright, the player controlled characters have an array of unique survival skills.  One skill is to open doors with a can – opener.

Most of the time the player is killing or bashing people with pistols, baseball bats, bare hands, explosives, and other weapons found in the game.  The player not only faces human enemies but the player also has to contend with mutated stray dogs, radioactive goo, and machine gun welding purifiers.

At least the characters are interesting with a mix of facial features, expressions, hairstyles, and  scars. This gives them some individual looks.  With the nuclear disaster in the 80’s everyone is wearing tattered 80’s clothes.  The music and graphics also have an 80’s computer/ technology themed vibe going on.  A player can take a car to travel to different objectives is done.  Health is replenished through the consumption of medstims, food and consumables, and mutant mutt guts.  The game also provides for the player to unlock new skills and level up current ones.

Through the radioactive booze a player can get more stats and change appearance.  Clothing is changed throughout the game from looting dead enemies.  For the most part,  I felt like  I was a wasted killer hunting for supplies and booze in bunkers running around the Western Wastes meeting humorous bad guys and fending off mutated beasts.  With the gore and language, it is a game for mature audiences but those mature audiences can find this game entertaining and fun.

Inside one of the coolers the levels and floors look about the same, though different areas and towns become unlocked as the game goes along.  The player also gets a home base.   Wasted seems to have a decent AI, as different enemies tend to appear after each spawning of a different character.  Throughout the game there are needed weapons and supplies obtained from looting killed enemies, lockers, and storage containers.  Some of those items are clothes and others ammo and food.  It is worth looting every locker and enemy.  When driving to a cooler site or new level the wastes are inaccessible, the same at the house.  An exploration feature would have been nice.

This game overall is fun and entertaining with a good amount of humor.  It does lack a story and plot, and characters tend to be one-dimensional.  For a post-apocalyptic game it fits with the genre though tends to follow common themes.  Wasted has decent graphics, with a fair amount of gore and props. There are plenty of opportunities to loot supplies but with a limit on how much a player can carry in their pack.  There are also plenty of interesting baddies and challenges.  Overall its a good game to play just for fun and playing a wasted rogue survivalist fighting for a precious commodity in a post – nuclear world.