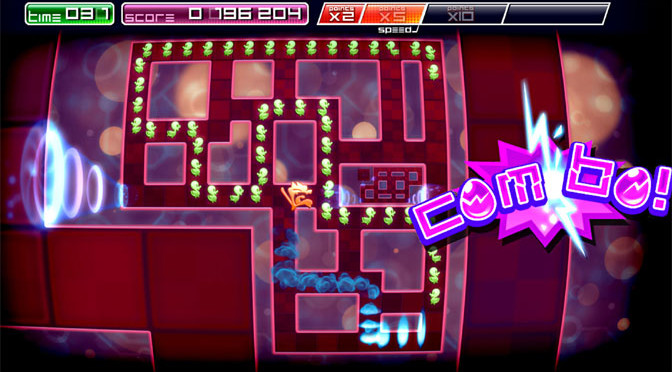 Beyond the mobile platforms, we don’t see too many arcade games make a splash these days. But Pix the Cat, created by developer Pastagames which also made the excellent Rayman Jungle Run may just break that mold. It may not be for everyone, but if you like arcade action, you can’t get much better than this on the PC or as a PSN download.

Pix The Cat follows the adventures of, well, Pix the cat. He’s kind of an odd cat in that he devotes most of his time to saving little ducklings. As a player, you save the ducks by first running across their eggs in a big Pac-Man-like maze to force them to hatch. Once hatched, they will follow you around the level and create a tail, which can grow to be quite long over time.

If you have ever played Snake or Tron Light Cycles you will immediately get the concept. You can’t allow Pix to hit a wall or run into his own tail, which is made up of all those chirping little ducks that are following you along. Doing so will eliminate all the ducks currently following Pix. Note that I don’t say it kills them as I don’t know if that is the case. But they disappear certainly, and you may feel bad about it.

Pix can shorten his tail by running over a nest, whereby one of the ducks in the tail will hop off and escape the maze. Both the nest and the duck disappear, so you need one nest for each duck that escapes the level. Many of the levels have lots of eggs nestled together followed by lots of nests. So you build up a huge chain of following birds and then dump off massive amounts of them by running over the nests. Once you have removed all the ducks from a level, either by saving them or accidentally destroying them by hitting a wall or your tail, a portal will open up that allows you to get to the next level. The whole game, at least in arcade mode, is timed, so you only have so long to try and save as many ducks as possible.

The catch in the gameplay is that the more successful you are in rescuing ducks, the faster that Pix runs. Theoretically this is a good thing because it means that Pix can get to more levels before the time runs out, rescue more birds and get a higher score. In practice it means that the difficulty ramps up quite a bit the faster that Pix moves. Some levels require strategic thinking in order to not go into a spot where avoiding contact with your tail is impossible, which means that speed is your enemy there. And that is not to mention the fact that speed makes all the tight turns very difficult. Should pix hit a wall, his speed is reset to more manageable levels, but of course that also means lower scores and fewer ducks saved over time. Finding a balance and getting into the groove of playing will be a key to success.

Graphically, Pix the Cat is kind of crazy. Levels tend to be quite flashy, as in disco tech in space gone wild flashy. Visual overload and even eye strain is a real side effect of playing Pix in a lot of cases. That is not to say the graphics aren’t good. They use just about every visual effect you can think of, but they are likely best admired by people watching the game as players will be too distracted trying to survive to notice all the little nuances. The sound, like the graphics, is a bit chaotic, which follows the gameplay just fine.

Doing well on arcade mode opens up other gameplay modes, such as the nostalgia one which is pretty darn clever. The graphics look like they came out of a Steamboat Willie cartoon, mostly in black and white. Pix and the ducks and everything else get a makeover in this mode to give it a real 1920’s type of feel. You know, just like the videogames were back then.

Other modes include the laboratory, where you are graded on rescuing the most ducks in the fewest moves and the arena, where player versus player battles can take place. Arena mode is probably much better on the PlayStation as on the PC you need to have a keyboard and a separate controller to host a local game. I guess having two people on the same keyboard wouldn’t work out.

It’s a little surprising to find a game like Pix the Cat hitting the PC, though less so through the PlayStation Network. It’s the kind of game that normally comes out for iOS or Android devices. Having the power of a PC or a PlayStation backing it means that the visual effects can go through the roof, and they do, without hurting the framerate or the gameplay. And it’s quite fun to compare your high scores to those of the worldwide community. For the price, currently $9.99 on Steam, Pix the Cat offers a ton of arcade-style gameplay. It may not be for everyone, but if quick action and reflex-based gaming floats your boat, Pix the Cat can become your new captain.