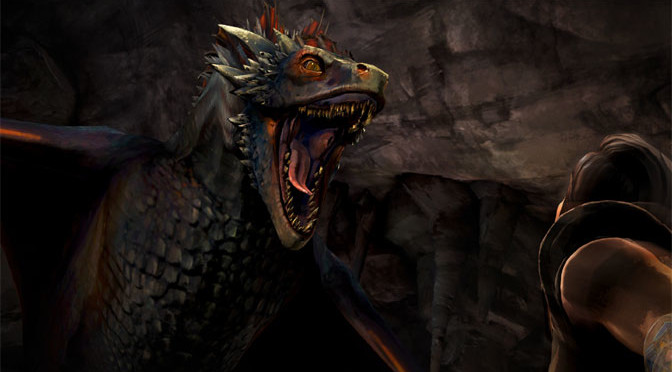 Game of Thrones: The Sword
in the Darkness

The third episode of Telltale Game’s Game of Thrones (GoT) series comes out just as the TV series is coming back with new episodes and a new season. That should make for a pretty good time for those that love all things GoT. And while at times some of Telltale’s episodic adventure series have waxed and waned, with GoT, it so far just keeps getting better. Game of Thrones: The Sword in the Darkness is the third of a planned six, and will make you really wish that more episodes were already available.

We begin The Sword in the Darkness with House Forrester still in serious trouble. Much of the game this time will focus on Asher as he travels to Mereen to try and raise an army of sell swords to protect his home. As before, a lot of the combat part of the game will center around Asher as he attempts to stay one step ahead of the Lost Legion. However, those sequences seem more balanced in episode three than they were in either the very first episode, which was brutal, or the second episode, which was also extremely difficult though in smaller doses. Combat is still challenging in The Sword in the Darkness, and I think players will enjoy those sequences, but I at least didn’t have to go back and replay sequences over and over again just to be able to flip out of the way of some form of death at the last second multiple times hoping to get it right. In fact, I got though most of the combat sequences on the very first try, though my heart was racing a bit.

There are quite a few surprises in the episode, nothing like finding out that Rodrik is alive from episode two, or that he is a playable character, but there are quite a few moments where we just know we are in big trouble seeing someone, or something, arrive suddenly at an unexpected place.

While the scenes taking place across the Narrow Sea with Asher are exciting, much of the game will also be spent with everyone’s favorite squire Gared Tuttle, now exiled to The Wall, which is why the episode is called The Sword in the Darkness, owing to the fact that the slogan is part of the pledge that recruits to the Night’s Watch have to make before they can be called Brothers. You actually get to make the pledge in this episode, which is a nice high point for those looking for a deeper story.

The part of the game that focuses on Gared is much more role-playing based, where you have to pick your friends out of a limited handful available, and also some puzzle solving relating to a map that might point the way to the mysterious North Grove. There are also hints that the vows that Gared takes may have to be promptly broken. He may have to decide what is more important to him, the fate of his house or his new duties to the Night’s Watch, though that is a choice presumably for a later episode, likely the very next one.

And Gared won’t be able to escape the episode without some combat, as trouble always seems to follow him, literally in this case. Gared’s fight is probably one of the best in the whole series so far, owing both to its location and the intensity of the battle, which you can do your best to try and avoid, but which will likely lead to a bloody affair nonetheless.

Meanwhile, Mira is still out at King’s Landing, which despite the beauty of the place, is likely one of the most deadly in Westeros. You will have to sharpen your skills and play the political game there if you want to make it through this one. Episode three takes place around the time of Joffrey’s wedding, which if you watched the show, you will know is a pivotal time for the story. The fortunes of many of the main characters will rise and fall in King’s Landing at that time, and your lowly handmaiden needs to be careful she does not ride anyone’s coattails to her destruction. Given everything that is happening there, it’s a safe bet that Mira will be greatly featured in episode four.

As a final surprise, at the very end of the episode, Asher gets to meet fan favorite Daenerys Targaryen. She has one line of dialog, but it’s apparent that she will a major force in the next episode as well. Can Asher charm the mother of dragons? Time will tell.

Episode Three, Game of Thrones: The Sword in the Darkness earns 4 1/2 GiN Gems and keeps the midpoint of this series on an incredibly high note.