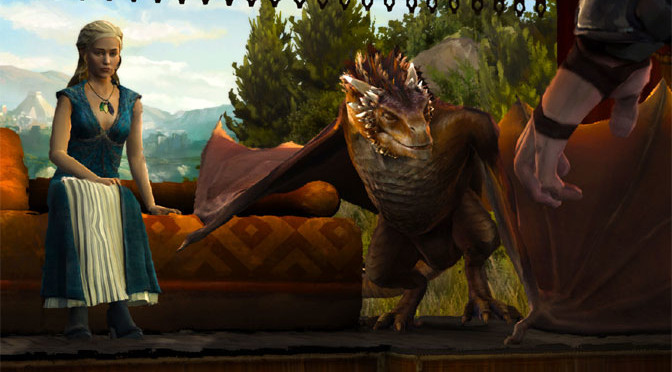 Game of Thrones: Sons of Winter

The final episode of this season of the Game of Thrones TV show just wrapped up, and brought with it a lot of interesting twists and plenty of really surprising deaths for a show not afraid to kill off main characters. Meanwhile, over in Telltale Games’ adventure game adaptation, things could very well be screaming towards a similar conclusion. Episode 4 Sons of Winter is about as action packed as these types of games get, but what is more chilling is the fact that several of our favorite characters are being backed into very dangerous corners. It’s doubtful that they all will get out alive.

As with the previous episodes in the series, this one follows the trials and tribulations of House Forrester and includes old favorites that have been with us from the beginning as well as new Forresters that we met in episodes two and into episode three. At least the ones who have survived so far.

There are four main settings for the fourth episode, including Ironrath (and the nearby Whitehill stronghold), King’s Landing, the area north of the wall at Castle Black and across the Narrow Sea at Meereen. At Meereen, we finally get to interact with Daenerys Targaryen, a fan favorite to be sure, as she shows why she is known as the Mother of Dragons. Interestingly, she comes off as still a bit unsure of herself, given that this is set just before she is able to take over Meereen, so she has not developed her killer instinct just yet which is likely required of whoever will eventually rule the seven kingdoms.

[amazon asin=B00Q7IO4FQ&text=Buy the GoT game series from Amazon]

But let’s start up in the north with Gared Tuttle since he gets a most traditional adventure this time around. In episode three, he had to fight off the man who killed his family at the top of The Wall. Even though it was self-defense, he is still blamed for it and locked in a storeroom, ready for execution in the morning. I’m not really sure why Frostfinger is so intent on having you killed, but that is the situation. You have to find a way to escape, choose which companion or companions to take with you, and then beat feet for the wildling territory north of The Wall. When one goes looking for wildlings, one probably finds them, and there are some limited combat sequences once he gets up there, though the bulk of playing with him involves trying to escape the castle. He’s set to seriously start looking for the North Grove now, and my guess is that we will finally find out what awaits there, and how it could possibly help the Forresters in the next episode, a good bet given that there are only two left.

Back at King’s Landing, we finally get to see Mira develop into a shrewd strategist. No longer does she have to run around playing defense and trying to talk nicely to the queen mother. Now she is released to plan her own strategy and can manipulate people as the player sees fit. She can become quite cunning and ruthless, betraying those who trust her, or she can keep her reputation intact and complete her objectives other ways. It’s nice that the players are given a bit of choice in how Mira develops. Either way, her political skills are front and center and has players eavesdropping and information swapping while trying to figure out the best approach to help her family from afar. If she survives her trials in King’s Landing, which is by no means assured at this point, I would not be surprised if she somehow rises to a position of power, certainly within her own house, but perhaps elsewhere too.

Back at Ironrath, we see Rodrik slowly getting back to health, and trying to learn how to fight with a sword again. In a really cool scene, we are able to learn a specific move to help make up for our broken body, and get to practice the keystroke and stick combination to make that happen. Later on, we are given the opportunity to do it when it counts, and it’s really cool that we can do the exact same move that we practiced once again.

But Rodrik’s story this time is not about fighting, but an invitation to the stronghold of Lord Whitehill, our sworn enemy. If you play your cards right, you can set up a trade where you can swap your imprisoned little brother Ryon for something the Whitehill’s hold dear. The swap is supposed to take place on neutral ground, but I suspect that Whitehill will do everything he can to double cross us. Alas, this is a subject for another episode, though I would suspect that it must all go down in five.

At the end of the episode, Rodrik gets a very unwelcome visitor to Ironrath that will chill your spine, but again, we don’t know what will come of it since the current episode ends before we find out.

Finally, back to Meereen, where exiled brother Asher agrees to help Daenerys by infiltrating the city in the middle of the night. You have to make sure that the signal fires don’t get lit so that the slave revolt can gain the upper hand, a sort of behind the scenes mission that follows both the books and the TV show. Here is where the gameplay gets really interesting and different.

Instead of a straight combat sequence, you are tasked with infiltrating one of the signal fire outposts and silently killing all the guards before anyone can raise the alarm. You are given some limited choices as to your plan of attack, and that determines somewhat the choices presented. You will be sneaking up on people, only moving forward when you think their heads will be turned, and then knifing them in the back. It’s not quite like a game centered on stealth like Thief or anything like that, but the sneaking sequences are well done and exciting.

You also may be tasked with doing some silent crossbow shooting as well, though we have seen those types of sequences before. And have no fear, even during the covert operations mission, you will have at least one moral choice to make that has become the hallmark of the series. Just because you are fighting behind the lines doesn’t mean you don’t have to think hard about some story choices.

All in all, Episode 4 is probably one of the most exciting to come out in the series yet. Seeing Mira finally develop as a strong character is really nice, as is the unexpected new combat sequences. And I’m not ashamed to admit my heart was beating very quickly during the Whitehall meeting. I expected some treachery, and was trying to anticipate anything, but was still very surprised at how it all played out.

There will be plenty of people who are upset that the TV series has wrapped up its season, especially given all the loose ends we saw there. But at least we can take comfort in the fact that the video game still has two episodes left, and are every bit as good, if not better in some places, as the show. Episode Three, Game of Thrones: Sons of Winter earns 4 and ½ GiN Gems.

3 thoughts on “Game of Thrones: Sons of Winter Heats Up the Series”