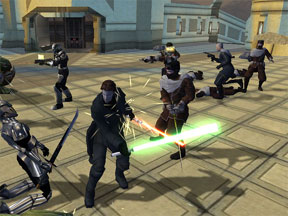 Knights of the Old Republic
II: The Sith Lords

As most gamers know, games based on the Star Wars genre or movies can be hit or miss. LucasArts has had its share of lukewarm and downright bad titles over the years with games like Galactic Battlegrounds going into the former category and Rebellion going into the latter. (note: I have one friend who swore that Rebellion was a great title, so I suppose every game has its supporters.)

But where most Star Wars fans agree is on the Knights of the Old Republic games. They are epic. They are intensely popular. And they are, in short, why most of us play computer games.

When I first experienced the original title I was instantly enthralled. Set 1,000 years before the movies, you could still run around the Star Wars universe, but were not bound by the known historical line which so many fans are rather militant about. The technology of the universe is very similar to that from the movies, just not quite as streamlined. You still have droids and blasters and light sabers and spaceships with hyperdrives plus plenty of worlds and space stations to explore.

The original title featured a deep plot with an amazing twist that would have made Alfred Hitchcock proud. Plus there were plenty of likable NPCs to meet and interact with, some of which would even join your party and adventure around the galaxy with you in your customized freighter, the Ebon Hawk. The Hawk looks a lot like the Millennium Falcon, but much older and less sleek, like most of the other technology in the game.

As with all sequels, I was very nervous about this one. How many times have we been treated to an amazing first game, only to be let down by the follow-up game? Thankfully, that won’t happen here.

The developers have obviously listened to the legions of fans who liked the first title in creating Knights of the Old Republic II: The Sith Lords. KOTOR2 has many of the elements that made the first game so enjoyable.

You actually start the game as a jedi this time, so you won’t waste any levels putting them into another class and then later realizing your jedi ways. When the game starts it seems like you might actually be the last of the jedi, which is shocking because the game takes place just five years after the first one. It seems that shortly after the first game the strains of the long war began to manifest itself. Remember, you left several major planets in dire straits or nearly destroyed last time around.

To top that off, the jedi have been involved in a civil war, one the dark side seems to be winning. Most of the jedi have been hunted down and killed by force-sensitive hunters who can track them using the very powers they wield.

You however, are an exiled jedi who has lost their connection to the force after being expelled from the order for fighting alongside of Reven (the dark lord from the first game and a major player in the surprise ending). You fought with Reven before he became the dark lord of course, but the council is not very forgiving with you and you are exiled anyway. This however does explain why you start the game at level one. It also explains why you are alive. Without a connection to the force, the hunters could not track you, and you lived a semi-peaceful life as a mundane traveler moving alone through the universe.

When the game starts your powers are awakened again, which causes you quite a bit of trouble. Now it is your job to reunite the jedi council, which ironically broke up shortly after your exile. You must save many of those who condemned you, and fight a Sith Lord threat that could destroy all life in the galaxy.

You won’t be alone long however, as you quickly begin to pick up friends and allies, some of whom knew you from the war before you were exiled, and others who seem drawn to you and your charismatic powers.

One interesting thing about the game this time around is that not all your allies seem to be working in your best interest. In fact, in various cut-scenes it’s revealed that quite a few seem to be working against you at key points. Plus, many don’t trust the others and will advise you not to work with them. Your ship becomes a floating soap opera at times, which is great in a role-playing game.

Combat in the game is just like the original. You can have a party of up to three people (yourself and two allies). You can set the AI of your allies to perform missile attacks, use special powers, or jump in and mix it up hand to hand. Though it appears to be a real-time combat, it’s actually a cleverly disguised turn-based battle. You can set up your battle plans by stacking orders for your character to try and perform each round. And you can pause to examine the situation when needed. This keeps it very exciting without being a click-fest.

The sound in the game is of course top notch. I don’t think LucasArts has ever produced any game without an amazing soundtrack, especially one in the Star Wars realm. You get all the orchestra-like effects for music plus all the cities and cantinas sound pretty much like you would expect. Throw in some blaster fire and light saber swooshing and you have an awesome feast for the ears.

The game is not without a couple of flaws, probably because of the transition from the Xbox to the PC. In one scene, a bounty hunter named Mira joins your party, but each time I revisited the planet I met her at, she is standing on the docks watching me, even if she is in my away party at the time. Also, on that same planet, several dead characters are still standing around in various places. But given the overall impressiveness of the title, I can easily overlook a few mostly cosmetic flaws.

Knights of the Old Republic II is a worthy title and a fun ride for any PC game player. The interface is simple enough for a novice to learn, and the plot is deep and enriching enough to please even a hardcore RPG player. It is every bit as good as its predecessor, and in many ways even better.