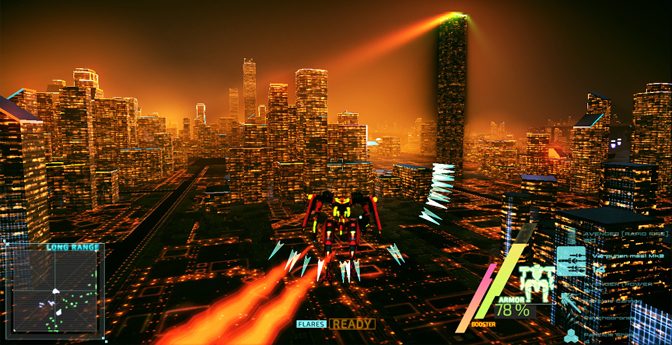 Hey all I’m back with a review of a rather odd Mecha game. It’s Project Nimbus: Code Mirai!

Plot Synopsis: It’s the late 21st century, decades after a great war devastated the Earth’s surface, making it unable to support human life. Mankind had escaped to a handful of orbital elevators and floating cities across the globe. Battles are now fought with giant mechanical suits, called BattleFrames. 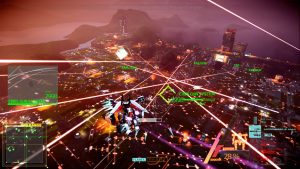 Plot: The plot is really quite sparse, and the story mode is incredibly short. Honestly half the time I didn’t really care too much about what was going on. It wasn’t until the second to last mission I even noticed the “Audio Logs” that are supposed to help fill in the background of the world.

Another thing that is rather distracting is the use of the word “Funnels.” Now if you have ever watched a UC Gundam series you probably know what these are. I don’t have an issue with nods and similar gameplay features to stuff that obviously inspired this game. However, the blatant use of a word that’s been used almost exclusively by that particular sub-series is rather disappointing. 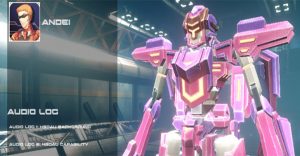 Gameplay: Gameplay is okay, and honestly it felt like I was playing a Gundam game where everything is incredibly freaking small in way too big of a battle space. What I’m saying is that you can easily get lost in a fight and have no clue where your enemies are, and they may be hundreds of thousands of meters away. Now you can close that gap in mere seconds, but the fact that you can do so makes the fact you have to do so really weird. It’s like you are playing a game where your enemies should be visible, but until you get within arm’s length they just aren’t at all. It makes the game very disorienting. Those funnels I mentioned early were also really difficult to get the hang of and even after figuring out what to do I still couldn’t use them correctly 95 percent of the time.

Attention Mech Pilots! Pick up a copy of Project Nimbus from Amazon! 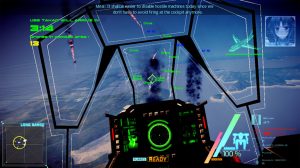 The correct use of them is to to block all incoming missile attacks, but frankly it’s not easy to do as that requires you to not have a lock on an enemy. Which when you are literally jetting around the battle area is really counter intuitive and counter-productive.

Characters: Honestly, I only enjoyed one character, and that was Mirai and only because she seemed just as confused as me as to what the hell was going on. The rest of the cast was so dull and drab that I can’t really even remember them despite having just put down the game 10 minutes ago. That’s not a good thing and is another knock against this series. 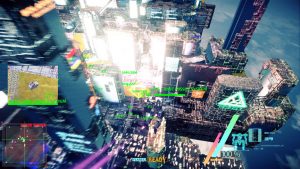 Art: The art looks like it could be from the early years of the past generation of consoles. Honestly even being a crowdfunded game shouldn’t be excuse enough to lack environments so much. One level early on is literally the Star Wars Hyper Speed tunnel effect with you just flying about in that tunnel. It’s really lazy and while it fit the scene it could’ve been made more interesting by allowing the player to have to defend the ship you were traveling on while running away. But instead you just blast about in that tunnel and the ship is non-existent. 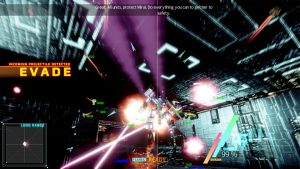 Music: I just got done playing the game, and honestly the music was so unnoticeable that it might as well have not been there. In addition, the voice acting was truly atrocious. I’d expect people to at least pronounce words correctly, but when you say the bow of a ship (pronounced like the verb where you bend in respect or deference) I expect you to at least pronounce it right. Instead they completely screwed that up and said bow, pronounced like the weapon. 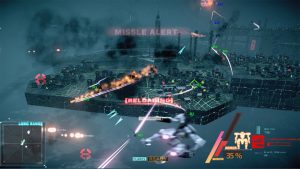 Overall: A rather disappointing game, unless you really want an alternative to an Armored Core or MechWarrior game, this shouldn’t be a consideration.

For those who like: Giant Robots/Mechs, Action, Combat, “Flight” simulation.

Not for those who don’t like: Any of the above, or Lack of Plot, Character Depth, Mediocre Gameplay, Decent Artwork or a Memorable Musical Score.