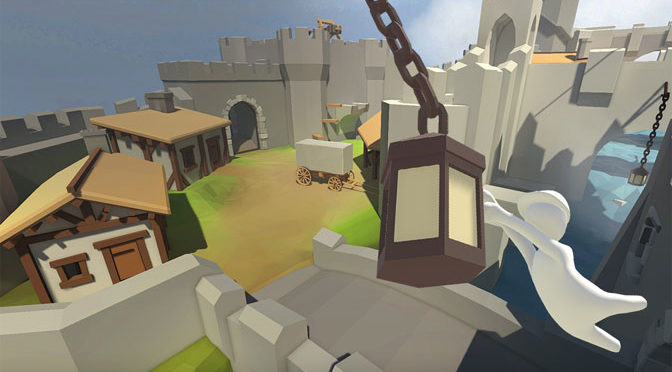 I, along with 10 million of people, am lucky enough to own a Nintendo Switch.  I’ve enjoyed my time with the Switch, but I can’t deny that there was a lack of games in those first months. That’s been changing these last few months as more and more games come out for the platform. A prime example is the subject of today’s review, Human: Fall Flat.

Human: Fall Flat isn’t a Switch exclusive by any means. The game has been out on PC since 2016, and PS4 and Xbox One versions came out earlier this year. Still, the game didn’t show up on my radar until making an appearance on a Nintendo Direct a few months ago. It looked interesting and goofy. Something Alia and I could sit down and play together with ease. That’s exactly what we did too when the developers gave me a review code for the Switch version of the game. 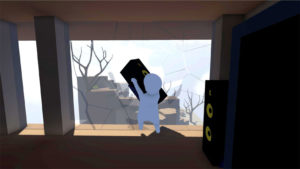 Human: Fall Flat is a puzzle game that takes place in a 3D space and has a major focus on physics. Nearly every puzzle that players will solve in this game will require the use of physics as they try their hardest to move forward. The puzzles start out easy enough with just pulling boxes onto switches to open doors. However, those introductory levels don’t last long before the game starts hitting the player hard with more difficult tasks.

Human: Fall Flat’s reliance on physics means that players won’t have to solve puzzles in any one particular way. Sure, there are puzzles that have clear methods of completion, but many can be solved in ways that the game isn’t pushing the player toward, and there’s nothing wrong with going down that route. 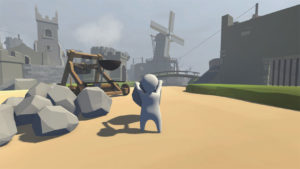 I spent some time with Human: Fall Flat by myself at first and it was an enjoyable experience. Despite this, I highly advise playing this game with an extra person. Some of the later puzzles can become trials of patience as the player attempts to get the game to do what they wants. This becomes less monotonous with a second person, but can still wear on the players after a time. I actually advise tackling this game in short bursts. It saves after every puzzle so there’s no worries about losing your progress.

The controls are something that I’d normally discuss first in a game, but Human: Fall Flat’s almost seem more an element of the gameplay than just a simple way to move characters around. This is due to the unique nature of the controls. The left analog stick moves the player, the right ones adjusts the camera and A is jump. Those are the basics. However, the L and R buttons also act as the control for the player’s arms. The L button controls the left arm and the R button controls the right arm. Moving the camera moves the arms up and down. 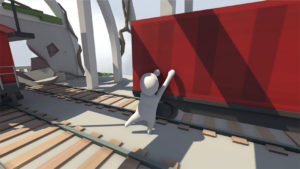 Taking control  of the drunken dough boys characters in this game is really a task in and of itself. Human: Fall Flat requires players to swing, climb and perform many other actions once mastering its controls, and that isn’t easily done. For example, climbing requires the player to grab a ledge with both hands, push the left control stick forward and move the camera down all at the same time. That’s just what it takes to climb a ledge. This is something another game would just do for the player, or only require the single push of a button for. If that explanation doesn’t highlight it, then let me just say that the controls are a little awkward to get the hang of, but once you do, it makes it incredibly satisfying to solve puzzles. 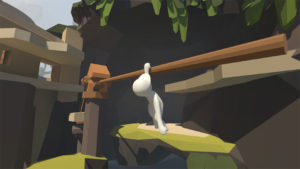 Now that you know just how ridiculous the controls are in Human: Fall Flat, understand that part of the game’s charm is watching players try to perform simple actions, but look like complete idiots in doing so. This is part of the reason that it’s fun to play with another person. I also can’t denying that grabbing another player and messing them up while they try to solve a puzzle is fun. Just don’t ruin any friendships with the trolling.

The visuals in Human: Fall Flat are simple, but work well for the game. It has a bit of charm to it that makes it more endearing when a puzzle doesn’t work out right. There is also a good selection of attire for players  to customize their characters with in the game.

The UI in Human: Fall Flat is great because there really isn’t one. Outside of the saving icon that shows up after a puzzle, players don’t see any extra prompts on-screen. Sometimes it’s just nice to see such a simple presentation. 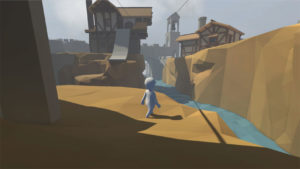 During my time with Human: Fall Flat, I did experience some trouble with the framerate. Specifically in one level where there is loads of water. I’m not typically the type of person to let this kind of thing bother me, but the game downright started chugging at some points in this area when both Alia and I were playing together.

Human: Fall Flat’s audio follows the same trend as the graphics: it’s simple. Most of the time the player won’t hear much in the way of music. Maybe a few notes from a piano, but not much else. This changes though after the player solves a puzzle and starts moving in the right direction. It begins sounding like an orchestra is cheering for the player. I appreciate this subtle way to let the player know they are heading in the right direction without just telling them. 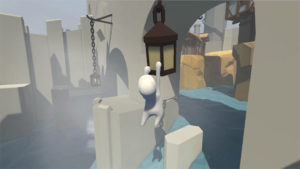 The sound effects in Human: Fall Flat are mostly generic. This includes breaking glass, bones , and souls (depending on the puzzle). It isn’t really bad, but it does standout as somewhat exaggerated, which may be what the game is going for.

Overall, Human: Fall Flat is an entertaining puzzle game. I advise Switch owners to pick it up if they enjoy the genre. It has a few flaws here and there, but none are so bad as to warrant avoiding this title. If you’ve got a friend or family member to play with, I recommend it even more.