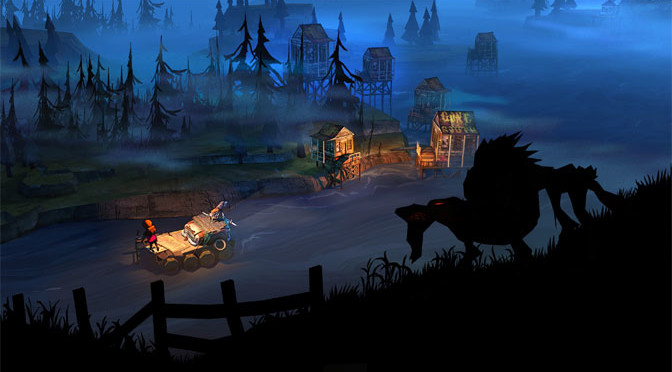 The Flame in the Flood

The Flame in the Flood is a look at a post-apocalyptic America that’s heavily submerged in flood waters. It plays less like the Capital Wasteland in Fallout and more like Don’t Starve, complete with a charming, folksy American soundtrack, and a depiction of a girl and her pooch against a world where everything tries to kill you. So, will The Flame in the Flood stave off your hunger for a survival game, or will it leave you dying of thirst? You should know by now that we’re going to find out.

You play as a girl named Scout, and her dog Daisy, on a solitary survival quest through a flooded and dangerous United States. As is typical of the survival game genre, players will have to manage their hunger, thirst, body temperature, and sleep stats as you progress through the game, crafting devices and traps that make maintaining your status easier, all while avoiding dangerous creatures or illnesses. Afflictions at the start of the game, like getting poisoned, can be highly demotivating, and while you can craft basically everything you’d need to heal an illness or wound, there are no spoonfuls of sugar to help the medicine go down.

Check out our review of the game on other consoles. 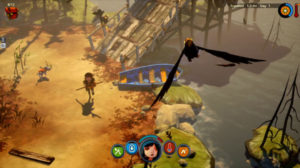 Players control Scout and trek from one small, randomized location to the next, going downriver on her raft whenever you exhaust a location of its resources. You can combine the items you find into knives, traps for animals, water filters that will let you clean the floodwaters for consumption, and plenty more. All of the items you scrounge up from the surroundings take up your limited inventory space- spread across Scout, her dog Daisy, and the raft. 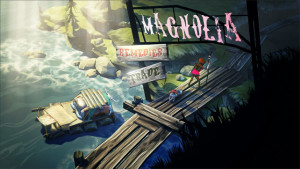 The raft is your only hope for charting your way through the massive river of floodwater that is central to The Flame in the Flood, and at first the river current may quite easily overpower Scout’s ability to paddle the little boat and you may have to miss searchable locations due to last minute debris getting in your way (floating houses, rocks, even sections of bridges). Finding the right items to survive is paramount, and something players should expect to always need to do: Staying out in the rain or not getting enough sleep can lead to contracting some type of sickness, messing with boars can wound you and break your legs, running through bramble can wind up with your character getting cut and poisoned, and that’s not even to mention stumbling across a bear which, if the player is unprepared, can easily end a run of the campaign or endless mode.

Much of the survival genre is spent looking at various menus, whether it be for inventory management or for crafting, and The Flame in the Flood is no different. Moving items that you’ve just crafted among Scout, the pup, etc., will be a significant time sink, not to mention popping open the crafting menu just to whittle down your inventory to increase available space while hunting new items. A lot of the game is visiting very similar-feeling locations, outside of a few exceptions as you can run into other humans and other small events, so much of the driving force behind the game is the continual pursuit of reaching the survival game equilibrium: Having enough resources to not be completely overtaken should something unexpected pop out at the player.

The only real issue with The Flame in the Flood is how quickly players reach that aforementioned equilibrium. After dying a couple times learning the mechanics, it’s quite easy for players to quickly reach the point where they can kill a bear and then coast on all the resources they have to the end of the game. For some, this will be an incredible boon: The Flame in the Flood does truly become easier as you go along and have enough resources to combat whatever afflictions or beasts random generation may throw at you. For others, however, it can be quite a problem to acquire most of the resources you’d need about 60 percent of the way through the campaign and not be challenged anymore after killing your first bear (which is easier if you remember you can craft traps to succeed in this versus attempting to Gladiator the man-crushing beast).

[amazon asin=B073DJSYSX&text=Cruise downstream with the delightful The Flame in the Flood with a copy from Amazon!]

The graphics are quite beautiful for an indie game, and everything has a gorgeous painted aesthetic that really pops in both handheld and TV mode. As equally beautiful is the Americana soundtrack that is so astoundingly fitting that it sets the tone for the southern feel of the environment perfectly.

So, a lot of time was spent comparing The Flame in the Flood to standards of the survival genre, and, if you have access to a game like Don’t Starve, what is there in this game that makes it stand out? The answer is: This is a competent package of everything the genre stands for. The raft, and subsequently upgrading it, is one of the larger standout features of The Flame in the Flood, because this game focuses on moving you from location to location rather than building a base of operations in order to survive or sustain yourself. Another major difference is that your end goal is not death: You’re progressing to an eventual end through a variety of randomized location set pieces to further Scout and Daisy’s survival, versus the typical piece of the genre that you play until your character dies and then you start over.

Overall: The Flame in the Flood is an excellent little survival game and a strong addition to Nintendo’s eShop. Inventory management can be a pain sometimes with the menu not being quite as streamlined for controllers as I would have liked, but the elements of the game were extremely enjoyable if not a little too easy toward the end of the game’s campaign. Those who appreciate survival game aspects and crafting will definitely enjoy The Flame in the Flood, as its rife with challenge and little events to keep you occupied while you learn the game mechanics. Those who dislike having to manage various status meters may more appreciate other games in other genres, though The Flame in the Flood is actually a great starting point for trying to break into the survival genre as its mechanics aren’t overtly obtuse nor is it excessively difficult.