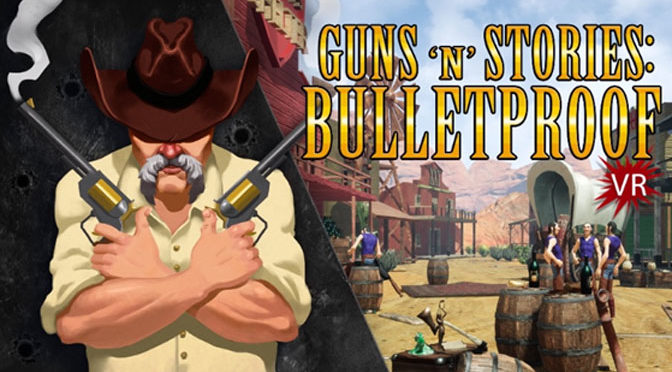 Independent developer MiroWin today announced that Guns ‘n’ Stories: Bulletproof VR is getting its next big Early Access update. Act II of the game has been released owners of them game meaning players can continue their journey into the strange and surreal world of Old Bill’s memories. Strap on your VR headset, don your cowboy hat, load up your six shooters and start showing the scum of Sintown who’s boss. Guns ‘n’ Stories: Bulletproof VR is a stylish, irreverent take on the VR shooter, a raucous inheritor to classics of the genre.

“We couldn’t be happier to share Act II wirth everybody,” said Michael Shkaredniy of MiroWin, “Not only does the story get even crazier, but with new enemy types, weapons and an awesome new boss, Guns ‘n’ Stories: Bulletproof VR is even better than before.”

While Act I was set against the intense, bright heat of the wild west, Act II will will introduce you to the cold, tranquil beauty of the American frontier at night. Old Bill continues his journey to save the denizens of Sintown, making his way to the perilous Casper & Jasper Fort. With new enemies to face, fresh weapons to master and a tough as old cowboy boots new boss to face, Act II of Guns ‘n’ Stories: Bulletproof VR will challenge players’ sharp shootin’ skills to the max.