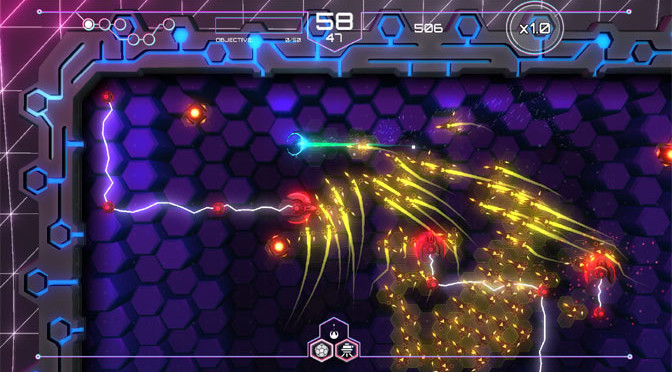 I was asked to review a rather new Indie game a few weeks back and I’ve finally been able to write up the review for it. It’s Tachyon Project!

Plot Synopsis: In Tachyon Project you take control of Ada, a software program that has taken conscience and that was designed to hack into the most secure servers on Earth. After some rather mysterious events, Ada is thrown out of the test server where it was living and out into the Internet, but when she tries to go back there she finds she can’t do it.

Plot: Honestly between the vague and odd way the two “Parents” of the player character address said character and the way that said character expresses views I couldn’t really make sense of this plot other than what I put above for the plot synopsis. It’s a convoluted mess, thankfully for a $10 game you aren’t paying for it either.

Gameplay: Imagine a less polygonal version of Geometry Wars, or any bullet hell with a square shaped stage that is every level in the game, and you have Tachyon Project. It’s neither innovative nor terribly amazing to play. That being said you are paying a single dollar per level that’s offered in the game so I wasn’t expecting much out of this. That said you’d get better value out of most mobile games like Angry Birds than you’d get out of this game.

Art: Alright, but I’ve seen much better Indie games with art that blows this out of the water twenty times over.

Music: Annoying and too much bass used for everything for my personal preferences, I’m sure there is someone out there who enjoys the music, but I’m not one of those people.

Overall: Don’t bother with this, Kromaia Omega is a much better bullet hell game and it’s priced exactly the same.

For those who like: Bullet Hells, Geometry Wars, Gibberish for a Plot.

Not for those who don’t like: Any of the above, or someone who wants to buy something that isn’t a waste of money.