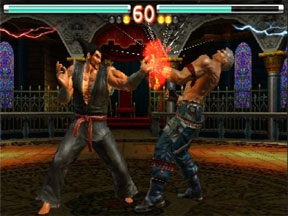 The Tekken series has more than made its mark on the fighting genre with its solid gameplay, unique characters, and diverse play-styles. Now Tekken makes its move to the 3DS. Luckily, it takes all its pros with it and puts it in a nice little portable pouch. Tekken 3D Prime Edition gives you the fighting experience of a Tekken video game and includes the full length theatrical film TEKKEN: Blood Vengeance, now viewable in 3D.

I mentioned TEKKEN: Blood Vengeance back in my Tekken Hybrid review. Sadly, not much has changed since then aside from the new 3D effects. I will admit that the 3D effects look really nice during the movie, especially during its climactic action sequence between the Mishima Clan. However, the shallow and disjointed story, lack of character development, lack of characters in general, and the limited amount of actual fight scenes still leave TEKKEN: Blood Vengeance out in the cold for most viewers, especially fans of the series.

Aside from the theatrical downside, Tekken 3D Prime Edition is a solid fighter with a good deal of fun to offer. The play modes are limited, giving the player the choices of Special Survival, Versus, Quick Battle, and Practice. With these few options, the roster of 40 characters is welcomed to keep the game interesting and varied. All the favorites are here, some you’ll remember, some you may not, all keeping with the traditions of each having their own unique fighting style.

Though the modes may seem restricted, for a handheld title, Tekken 3D offers you everything you will need to keep the enjoyment around for a long while. The solid controls and fluid fighting make each match enjoyable and each opponent a welcomed challenge, as the more time you spend with a fighter, the more about their movements and style you learn and slowly master.

The first thing you will do is create a profile and choose your favorite character to represent you in online fights. As you win fights, you can earn points and increase your rank.

Versus mode is where the online play comes in. You can choose to search for other players online by rank if you wish to even the playing field, or just search for any opponent if you are looking for a challenge. This makes finding opponents very easy.

This is where the most fun will be had. Slow downs are common when fighting online, though, so watch for that. They’ve never been detrimental to a fight for me, but they may take you by surprise at first.

Quick Battle is the most easily accessible, as it plays out as close to an arcade mode as you can get.

However, Special Survival is probably the most interesting single player mode. Special Survival plays out like most other survival modes, pitting you against several opponents, one after another, until you finally die or defeat them all. You start out with a 5-battle survival challenge, but as you complete them, you will unlock longer, more difficult challenges that keep you engaged, especially when trying to get the hang of multiple characters.

The visuals don’t quite match its console counterparts, but they look just fine on the 3DS. The 3D visuals don’t add much to the gameplay, but they don’t disturb what’s happening on screen either. On or off will make little difference, other than some combat visuals that look nice in 3D.

A story mode or something similar would have been appreciated, but what Tekken 3D does have it uses well. If you want a fighting game that you can take with you and enjoy killing time with, or finding others online to test your skills, then this is the title you’ve been waiting for, now in 3D.