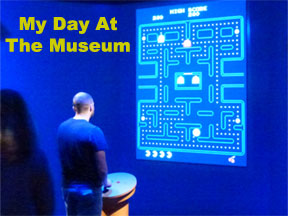 The Smithsonian American Art Museum is a grand building on 8th and F Streets NW in downtown Washington DC. It’s an auspicious place to have an art exhibit, full of gravitas and more than a little pomp. It’s perhaps an unlikely place to find anything to do with video games, but there, tucked away on the second floor is The Art of Video Games.

I went to the exhibit with Kristin Brown who is reviewing the companion book: The Art of Video Games: From Pac-Man to Mass Effect. It took us a while to find the exhibit. It really is all but hidden away on the second floor, as if the museum isn’t quite sure it really belongs there. Still, as we turned the corner and saw the opening exhibit, a massive wall showing clips from some of the greatest video games of all time, I was filled with an utter sense of pure joy.

Here at last was validation for something I’ve long felt to be true; these games we love are art. As the screen flashed clips from game after game, I named them for Kristin. A lot of them she recognized on her own, some were new to her, but we both felt the same since of joy at seeing them, like friends from the past suddenly returned.

The exhibit divides video games into five eras with consoles and example games from each era. This was pretty nostalgic for us. We kept pointing to consoles and saying things like "I had one of those," or "I really wanted that one," or "my neighbor had that one." It was a reminder of how many different consoles there have been in the last forty years and how some of them were so much better than their peers.

There was framed original concept art and inspiring quotes painted on the walls. There were glass display cases with original game maps and box art, but perhaps best of all, there were giant screens with playable games for the public to enjoy. It was fun to watch people play the games. We stood before one of the big screens watching a steady stream of people play Pac-Man for a long time. We both laughed as everyone made rookie mistakes and lamented that our friend Jennifer Heddle wasn’t there to show them how it was done.

All in all, the Smithsonian American Art Museum, and curator Chris Melissinos in particular, did a wonderful job with the exhibit. It was a professional and respectful look at video game art, which at the same time was fun and engaging.

I didn’t approve of the voting process in picking the games. I felt that the curators should have made all those decisions like they do in traditional exhibits. I do, however, understand that the voting got the public’s attention for an exhibit of artwork that is far from traditional.

Despite my initial misgivings, I enjoyed the exhibit immensely. I do wish it had been larger. There was certainly enough material for it to have been two or three times larger, but perhaps that was asking too much of the art world, when they were clearly just dipping a toe into this somewhat scary realm. Unfortunately, the size prevents me from recommending anyone travel a great distance to see this exhibit. Luckily, when it’s done at the Smithsonian American Art Museum on September 30th, it will hit the road to ten U.S. cities starting in Boca Raton on October 24th at the Boca Raton Museum of Art.

See the website for other dates. When the exhibit gets to your part of the country, go. Take your kids or your parents. Show them. Share the joy.