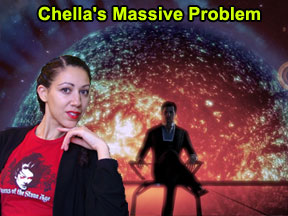 The original Mass Effect launched way back in November 2007 and the series still feels fresh and exciting. It’s astonishing to think that I’ve spent five years with my version of Commander Shepard; a black female who walks the Paragon path. Over those years she’s loved and lost and loved again. Sometimes she makes tough choices, but always the ones she thinks are right. Although, every now and then something really gets her goat and she does some fast talking using the trigger of a gun.

Shepard and I have been fighting together to save the universe for all these years and I’m invested. I’m a fully signed up member of this world. But there’s trouble in this Reaper-infested paradise. As I’m approaching the end of the game, I have a feeling that the odds are stacked against me, in gameplay, as well as narrative terms.

GiN editor, John Breeden, has also been playing ME3, and we’ve been swapping notes in eager emails. We’re neck and neck in our race to save the galaxy and he’s getting the same vibes as I am. Something’s not right.

It all boils down to the War Room. The aim of the game is to gather as many allies as possible to help you take down the Reapers. There are two progress bars in the War Room; the military strength bar and your galactic readiness rating, which is represented by a percentage.

Throughout the game, my military strength has been increasing, as I’ve accomplished missions and gathered artifacts for NPCs. I’ve been diligent, scouring the galaxy for items and data for various scientists and researchers back on the Citadel. I’ve been uniting races holding ancient grudges and my green bar of military strength is practically full. It’s all looking good.

However, my galactic readiness is still at 50%. I’ve done all the missions – what gives?

EA and BioWare, in their wisdom, have decided that playing multiplayer games will increase your readiness rating and potential to see all the game endings. The other option is buy an iPhone or iPad game and boost your rating to 100 percent to avoid incurring the penalty on your military strength.

I don’t want to play multiplayer. I also don’t want to buy another game, when I’ve paid £40 for ME3 – the game I want to play. The fact that this feels like a cheap and transparent way to force people into playing multiplayer, leaves a rather nasty taste in my mouth. I feel cheated. I’ve spent five years, playing these three games and loving this series, only to be tricked out of all of the endings.

There was no indication at all that your military strength was so important. And yes, I would have taken more care to make sure I’d completed all the side quests before taking the last Cerberus mission. I made the schoolgirl error of thinking I’d be able to return to the Citadel for one last time and clean up the last bits and bobs before heading for the endgame.

Boy was I wrong about that one. So, instead I feel like I’m on a suicide mission, being fired out of a cannon, aimed directly at the sun. Luckily, my misfortune means I had time to warn John not to do the same, so he’s hoping to head into the final mission in much better shape than I am.

I’m just hoping that when the credit’s are rolling, I get the ending I think my three-game story deserves. It would be such a shame for BioWare to let me down in the final push over the top. John and I are going into battle at the same time, so it’s going to be interesting to see how things stand once it’s all over. We’ve got a GiN Lounge planned to analyze the whole thing from start to finish, so make sure you tune in.

If all goes well, I’ll still have a gamer crush on Mass Effect – wish me luck.