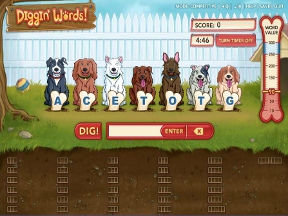 This week we’ll be covering something a little different in that out Time Waster isn’t a game but instead an entire site. Puzzle Nation is just what you would expect: a place where you can find puzzles to distract your mind for the few minutes you have before you usually have to do something else you don’t really want to. And if you’re the type of person who enjoys search-a-words, crossword puzzles and Sudoku, then this is likely the right place to be.

All in all the games are pretty straight forward and follow the same formula you know and love. There are some that have exceptions, but I’ll hit on that later. For now I’ll just describe the things you know. Sudoku, for example, is exactly what it says to be. In my opinion it was nice to do one without having to constantly erase when I got a number wrong. My only complaint, if you could even call it that, was the lack of an option to mark numbers that I knew, for fact, were right. No being able to put a little asterisk in the box this time around, but oh well, it wasn’t that big of a deal and the game worked just fine. The search-a-word is also pretty straight forward: find the bolded words off to the side among the jumbled letters of nonsense. Be prepared to have those little boxes of letters littered with orange though; for there are many, MANY (probably too many) words to find in that little space.

There are other classics for you to play, but now I want to hit on those who have a twist. The new crossword puzzle in particular, has been turned into a more adventurous version as you must guide your character along a path of discovered words in order to collect treasure and escape from the level within a ten minute time frame. Now I’m no good with crossword puzzles, I’ll be the first to admit that, but I can give credit where it’s due and this more interactive version does deserve it. After all, if this had been a classic puzzle, I would have just quit (and would have on this one had it not been for the ‘reveal word’ option). But getting to the end drove me on, even if it did obliterate my score in the process.

The functionality of having a guy walking along the board is a little awkward at times, but it was nice to see that the designers made him skinny enough, and smart enough, to stand between blocks and not on them so that he didn’t block your view. Also not forcing the player to solve every single word in order to get to all the treasure and out was a blessing, as the ten minute time frame does well to prevent that from being possible (unless you’re the crossword god of course). One thing I liked most, ironically, was that I couldn’t spam the reveal word button to just cheat my way through. Yeah, every time you use the reveal word button it takes 500 points off your score (which was a pretty large chunk from my already sad excuse for a score), but if that wasn’t enough, the dang thing also has about a half a minute cool down so that there’s actually time to figure things out if you can. I actually got a few right since I had the time to think.

Overall the Puzzle Nation is a go-to place to find the puzzles you normally would be doing in a newspaper or magazine on your mid-day break; it just lacks the pencil and paper. So if you have some time to waste, and if you enjoy these styles of brainteasers, then I suggest giving it a shot. I found myself spending plenty of time on the Sudoku alone, so I’m sure you can find something to keep you occupied as well.

Puzzle Nation solves its way to 3.5 GiN Gems out of 5!