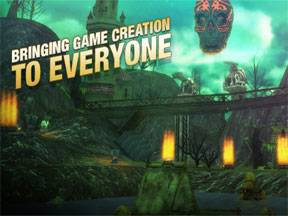 Jumala is a game destination like no other. Not only do the players themselves make the rules of the games, but other players can change them as they go along. And this interactive game-by-committee concept has resulted in some amazingly cool and fun worlds, with no programming skills required.

We created an interview with Frank Savage, the genius behind this new site, and asked him about how he came up with the concept, how gamers have responded to their newfound freedom, and what he sees on the horizon of our beloved game industry.

Visit Jumala and start making your own games!

Savage: My current project is a game creation destination called Jumala, where anyone can create a game and share it with their friends. Unlike many other game creators out there, Jumala doesn’t require programming skills and the games you create are built in 3D using graphics and an engine comparable to modern PC titles. I was the development manager for XNA Game Studio at Microsoft and when I saw the technology that Blade Games had created using XNA, I knew that we were finally close to being able to bring the experience and fun of creating in the gaming medium to the masses as well as being able to share those creations with their friends.

Savage: It’s really about being able to express yourself in this new medium. For years now, all other forms of entertainment ranging from writing to music to video have been democratized so that anyone with the desire to express themselves in those media could do so and share the results! No one has done this for gaming at all in a way that is accessible to a person who doesn’t know how to code or doesn’t have access to advanced art creation tools.

Even if they could, there still wasn’t an easy way to share these with their friends and invite their friends to be a part of the creation process. Jumala solves all of these problems by providing a rich, fun creation experience and lots of 3D content and capability so that everyone can create and have fun!

Savage: My original inspiration was Wing Commander by Chris Roberts. Without that game, my life would have taken a very different path. I played Wing Commander for 6 to 8 hours a day, 7 days a week and decided that this was something had a to be part of. I taught myself C++, wrote a couple of games to try and familiarize myself with how games were put together and managed to get an interview with Warren Spector at a GenCon back in 1991. I joined Origin Systems about a month later and never looked back.

Teaching myself how to be a game developer really drove home how hard it was to put a game together. That has been my primary inspiration for things like XNA Game Studio and Jumala. It’s really fun to express yourself with games but nearly impossible for anyone else to do!

GiN: GiN: Looking at the game industry today from your position as a game developer, what do you feel are the biggest challenges?

Savage: The current era of gaming has a lot in common with the early 1990s. We are in the midst of a proliferation of platforms ranging from mobile devices on three different operating systems to web-based content that has to work across at least three different browsers to PCs that have graphics capabilities ranging from barely being able to render the Windows Desktop to being able to render things like Skyrim at 200+ frames per second at resolution beyond HD! We are also in the midst of a proliferation of game players as well ranging from very casual Facebook gamers up through the largest hardcode gaming audience in history. This means that games of almost any type, genre and difficulty will almost certainly find an audience if you know where to look.

The challenges come in trying to match up the platform, game and audience and have all three be correct for the game you are building. The technology to do things like draw the game, playback sound, interact with controllers, mice or keyboards are pretty much solved problems today. What’s hard is building the game you want and then ensuring that the right audience on the right platforms gets to play it!

Savage: My best guess would be that the idea of physical media will be a thing of the past pretty shortly. DVDs, blu-rays and cartridges will not deliver games to their respective platforms. We’re already seeing that trend in traditional brick and mortar sales numbers falling off while downloadable content retailers are growing. In order for the transition to continue, games and content providers will need to solve the problems of the massive downloads we see today either by providing more episodic content that minimizes the initial download and allows the rest of the game to be brought down while the player is playing the first part; or by investing in technologies that let the game stream pieces down as needed so that the rich experience builds itself up over time and adapts itself to the platform in question. Actually in Jumala, we do a little of both.

All this being said, I’ve been pretty bad at making predictions in the past so don’t re-adjust your investment portfolio and blame me when it turns out I was wrong. (laughs)