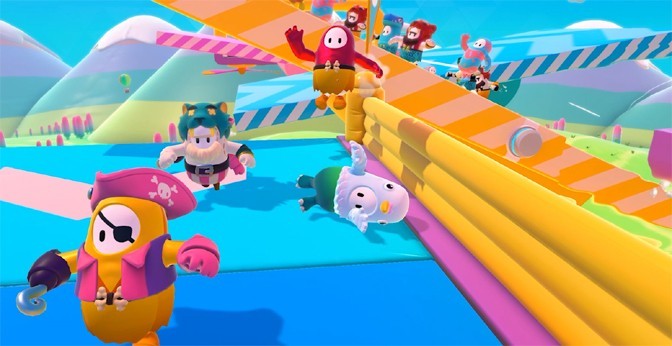 Every now and again a game comes along that perfectly captures the essence and the spirit of the times. It taps into that certain something that unites people, and everyone ends up playing it regardless of what kinds of games they normally enjoy, or even if they normally play games at all. Fall Guys is a game like that. It’s success is partially based on its simplicity, our love for competition, and the fact that it’s a silly escape for troubling times. Also, anyone can leap in and play regardless of their experience playing games before or their gaming confidence and skill level.

Fall Guys is clearly based on a crazy Japanese gameshow known as Takeshi’s Castle, which got even weirder as it was remade for American TV audiences as Wipeout and Most Extreme Elimination Challenge. Fall Guys is definitely more on the wacky side of that evolution. 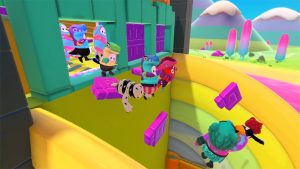 In the original game show, up to 150 contestants would compete in a series of ridiculous challenges. Most of them involved some kind of obstacle course where rocks would disappear underneath their feet, things would swing down and hit them, jets of water would pummel them at unexpected times, and various other surprises. In one really funny event, players would race through a series of closed doors, but only some of them were designed to open. Others were simply solid walls, which ended up painfully stopping many players cold (that particular event is fully recreated in Fall Guys). Failure in an event often meant a plunge into muddy waters or some other painful-looking elimination.

Takeshi’s Castle and the even crazier sequels that followed were almost cartoon like in their craziness. The Fall Guys game simply takes that concept and makes it into an actual animated funfest. 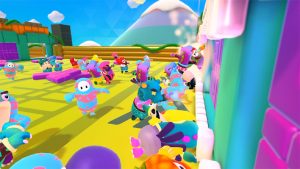 In Fall Guys, players are actually jellybean-like creatures. They look very silly running throughout the game with their arms waving and their nondescript faces always glaring wide-eyed at the course ahead. You can paint your bean in a variety of colors and patterns, with rare versions available in a store (bought with credits earned by playing the game) or sometimes awarded for gaining enough experience and earning a new level. To make things even more hilarious, you can add silly heads and bottoms to your bean, so you can become a rotund pigeon, dinosaur, pineapple, hot dog or lots of other funny creatures and objects. From what I have seen, costumes do seem to affect the rag doll physics of your bean, with very slight positives and negatives applied to most costume choices beyond just color and patterns. 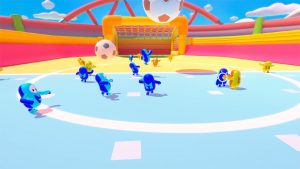 Fall Guys is incredibly easy to play. Anyone from eight to over 80 can easily do it. In addition to the standard movement and camera control, there are only three buttons. One to jump. One to dive forward and one to grab ledges or other players. Oh, and as a pro tip, you can dive even after you have jumped, even in midair, to sail forward farther than with a normal jump. The whole thing is set up like a game show, and begins with 60 player beans in costume all standing at the starting line of one of several race events. Because the game is maddeningly popular now on Steam and the PlayStation 4 (where it is being given away as a free game for August for PlayStation Plus members) finding a full set of 60 players is done in seconds no matter what time of day or night you are playing. 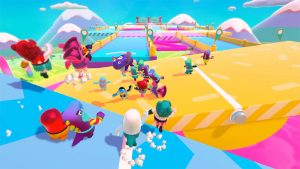 Your goal is generally to get from one side of the course to the other. In your way, depending on the game, are slime waterfalls, swinging weights, spinning propellers, rolling balls being shot out of cannons, runaway fruit, moving conveyor belts and the scrum of 50 or more other beans trying to squeeze into narrow passageways at the same time. Only so many people will advance to the next level of the game each time, so while you don’t have to come in first, you also can’t be last. 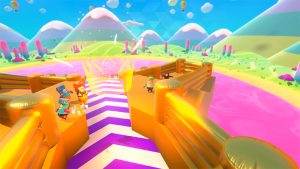 After successfully completing a race event or two, if you are still in the competition you will be placed into one of several team games. These happen when there are about 30 or 40 or so characters left standing. Team games are fun and involve things like pushing a giant ball toward a goal before the other teams can, grabbing golden tails from your opponents or keeping away from other players who want to jinx you and your team. In team games, the team with the lowest score gets eliminated from the competition, so work or fall together. 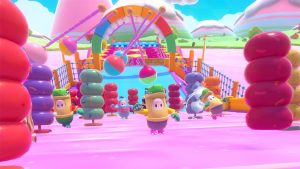 Eventually if you make it to the sixth and final round you will get to compete in a king of the hill kind of race where the winner grabs a golden crown at the very end. The first person to the crown wins the entire competition. And that is the only level where you have to absolutely come in first. But don’t worry if you fall out early, or have trouble making it past the first rounds when you are just starting out. The game awards both coins and experience for every level that your bean makes it to. So if you get eliminated in round one, you still get about 30 coins to spend in the store and a handful of experience. The learning curve is not too steep in Fall Guys, but it does exist. Have fun and don’t worry too much about placing as you learn how the different games work, and how the oddball physics affects everything in the game world. This is definitely a game that is really more about the fun of playing than the thrill of winning every time. 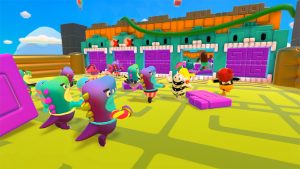 There are over 20 levels to compete in, with each one being randomly assigned as you progress through each competition. You will always start with a race event though, so expect to see the same handful of levels at first before you make it to some of the later team phases. That’s cool, because you can develop a good strategy for victory that way. Just don’t get frustrated. It’s all in good fun and you will get better over time, probably a lot faster than I did. 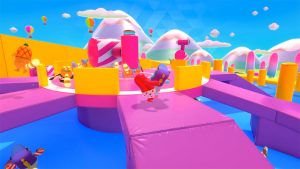 If you can get Fall Guys on the PlayStation 4 for free in August, then by all means do so right now. This is not my kind of game normally, but now I’m a big fan. It’s a great way to veg out (or bean out?) and let your mind turn off from the not-so-great situations in real life right now. If you are getting the game through Steam or after it goes on sale for the PlayStation platform, then its $19.95. That’s a really good value for a surprisingly addictive game that is likely destined to become a cultural milestone in the gaming community.