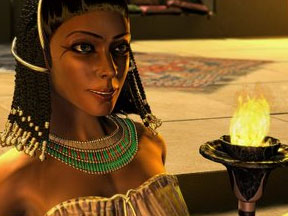 Cleopatra Riddle Of The Tomb

There has recently been quite a few puzzle adventure type games that start out in Europe and eventually get ported over to the U.S. market. Cleopatra Riddle Of The Tomb is one of them. However, unlike most of these efforts, this title actually does not do anything wrong. It offers about ten hours of mostly enjoyable gameplay.

The game is set in Ancient Egypt and surprisingly, is historically accurate. Most games figure everything set in Egypt should have hieroglyphics when in fact at the time of Cleopatra, Egypt had long-since been conquered by Alexander The Great. As such, puzzles here use the Greek alphabet. This little twist, positioned right near the start of the game, lets players who know figure out that Cleopatra is going for realism as well as enjoyment.

You play an astrologer working under a master named Akkad, who in turn works directly for Cleopatra. You also happen to be in love with Akkad’s daughter Iris. The game begins when you show up for work and both Akkad and Iris are missing. Given that Cleopatra has launched a civil war against her brother/husband Ptolemy which is tearing up Alexandria at the moment, this is not too surprising. (Although I did not know that Ptolemy was both brother and husband to that crazy Cleo, so that was a bit of a shock.)

At its heart, Riddle Of The Tomb is a puzzle game, more so than an adventure game. You basically can walk around with impunity (in other words not worrying about getting killed) until you hit a puzzle that needs to be solved. Unlike a really difficult puzzle game where you have to figure out what a puzzle is, here it’s pretty easy. When you hit a wall, sometimes literally, you have found a puzzle.

The game does a good job of easing you into the whole puzzle solving adventure. The first puzzles involve trying to find out where you master and girlfriend have gone (or were taken).

The puzzles themselves are fairly diverse and range from combining objects in your inventory to conducting basic research on Egyptian culture to discover, for example, what order to place statues for the ceremony to weigh the soul of a dead person. Almost all the puzzles are connected to Egyptian lore in some way, which adds a nice touch to the atmosphere.

We have mentioned that Riddle is pretty much a standard adventure game, but there is one thing that makes it a little different from others and that is the choosing of your astrological sign at the beginning of the game. This affects different puzzle’s difficulty levels, depending on if your sign is in power at the moment. I picked Cancer, my actual birth sign, and found that most of the time I was in favor and puzzles were a little easier for me. However even when I had a "bad result" with a particular puzzle based on my sign, the additional difficulty was only very slight.

As an example, near the beginning of the game you have to get some paper dislodged from a statue over a little stream. The paper is actually part of another puzzle. Anyway to get at the paper you have to build a little pole and hook thing. When you dislodge the paper it floats downstream. (Drying the paper out is part of another puzzle.) If your birth sign is in favor, the paper will end up at your feet. If you are out of favor, it gets stuck on the far side of a little lake and you will have to build a longer pole to get it. So it’s kind of cute to have the birth signs in play, though it really does not change anything in terms of the game, except for a slight difficulty level with some puzzles.

Once you are finished the game, you can go back and play again with two special signs, one that is always in favor and one that is always out of favor, so you can see all complete puzzles, but you would have to be really into the game to do this.

The only real negative for Riddle is the voice acting, or more specifically, the script for the voice actors. Their speech, even that of the exalted Cleopatra, was far too modern (being called Sonny-boy by a Crocodile priest was too much) which breaks the mood in an otherwise beautifully designed atmosphere complete with historical landmarks like the Great Library and the Lighthouse at Alexandria.

In the end, Riddle of the Tomb is a fairly straight forward adventure game that offers about ten hours of enjoyable thought-provoking gameplay without any notable flaws. Given the bargain price, it ends up being quite a steal for puzzle adventure fans and earns 3 GiN Gems.