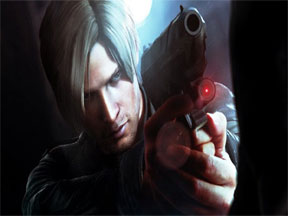 For many gamers, both the Resident Evil and Silent Hill series followed similar paths. They were revolutionary when they first came out, giving us a glimpse of how amazing a survival horror title could be, with puzzle solving, fighting, odd camera angles and lots of spooky locations and monsters. And both got slowly better over time. Then however, they both kind of jumped the shark. Almost everyone agrees that Silent Hill peaked at 3, and not just because SH4 was abysmal. Resident Evil went a little bit further to RE4 before it turned its pistol on itself.

Unfortunately, Silent Hill has never recovered in my opinion. But Resident Evil regains some of its former glory with the release of Resident Evil 6. That is not to say that RE6 is perfect or all that true to its roots. In fact, in a lot of ways RE6 is much more of a traditional shooter than a survival horror title now. But it does have some creepy atmosphere that will make the hair on your neck stand up, just like old times.

RE6 is a huge game. In fact, it’s a bit like three and a half full games all rolled into one. So you will get your money’s worth for sure, so long as you enjoy what Capcom is serving. There are three main campaigns, each with a slightly different theme. When you complete them, you unlock a fourth featuring Ada Wong which is more or less all about puzzle solving, which is kind of appropriate given that Wong normally serves as the keeper of secrets for the RE series.

Of all the campaigns, the first one featuring Leon Kennedy is the most traditional, and the one I enjoyed the most as a consequence. It’s not as good as RE4 in a lot of ways, which I will go into in more detail, but gives the best balance between horror, action and puzzle solving, whether you choose to play as Leon or a new girl named Helena Harper.

The second campaign features Chris Redfield and Piers Nivens, and it’s nice to have fan-favorite Redfield get some playtime once again. This one is more like a normal shooter. With the new cover mechanic and lots of soldier-type enemies, I swear I thought I was playing Time Crisis more than once on this one. That’s fine if you enjoy lots of action, but there isn’t much survival horror to go around in campaign two.

The third campaign features Jake Muller and Sherry Birkin, and is more or less narrative driven. Capcom was very clever in taking three different campaigns and weaving them together so that even though they feature different characters and mostly different locations from what we have seen before, that they all influence each other in major ways. The third campaign gives a lot of the answers to what is really going on in the game, and is used to great effect to tie everything into a pretty bow worthy of a good feature film.

The bonus campaign is cool, but is mostly about puzzle solving. Other than the fact that Ada is always portrayed as a kind of know-it-all superhero, it’s a nice bonus to stumble into once you think you’ve exhausted the game’s story, like finding a new chapter in a good book once you’ve read the last page.

In terms of gameplay, the emphasis is on team-play. If you play Leon, then Helena will be played by the computer, or you can open up your game so that anyone can jump in and take over the roll of your partner, or invite specific friends to do so. You can also allow Agent Hunt mode, which lets other random players jump in and take the role of some of your zombie foes, though I don’t know why anyone would do this. It’s hard enough fighting the scripted enemy AI. I suppose it makes things more interesting.

The AI is actually pretty good. Not only will they shoot enemies for you, but they will also rush up and heal you if you go down, preventing you from dying. They also don’t rely on you or your gear, and instead seem to have unlimited ammunition and healing tablets at their disposal. Given how little ammo is in the game, being able to fire and forget in terms of your partner is nice. I also never saw them get into trouble enough that I had to bail them out, though I did on a few occasions. But I think they could have handled it without me.

Like in previous games, you collect things like first aid spray and those red and green plants which can be combined into healing pills. Inventory management is quite good and you can press a button to see where you next objective is located, so you wont ever get lost, even though the levels are mostly linear in nature. I did find a few hidden gems by wandering off the beaten path, in those rare cases where there was more than one way to go, so that was a nice touch.

As you kill enemies, they drop chess pieces which translate into skill points. The skill points can be a real life-saver once you spend them on skills like improving your weapon damage, giving yourself more natural armor, or increasing the drop rate of fallen foes to replenish your ammo. Bigger enemies drop more powerful pieces, with knights being worth more than pawns and kings and queens worth the most.

Graphically the game looks pretty good, with a lot of diverse and creepy locations. My biggest complaint is that everything is too dark. I realize that things are supposed to be spooky, but I had to adjust the gamma settings way up and even then I could not play in anything but a dark room, and this was using an HDMI connection and a high-end LED TV.

The sounds is really good, with lost of squishy and other creepy sounds at the appropriate moments. The voice acting was fine. It wasn’t amazing, but it also never tore me out of the story, as bad acting will do sometimes. Music and other sounds did what they should, pumped up the atmosphere and helped make a complete package.

I was personally surprised to find that the gameplay was pretty darn hard. I was really struggling with the game on normal mode. I could not find enough ammo and since it takes five or six headshots to take some of the zombies down, I was getting grabbed a lot and running out of health too. I hate to admit this, but I had to set the difficulty back down to Casual mode. However, here I found things were challenging without being a walk in the park. And you can move the difficulty in the other direction, up two more levels harder than normal mode, if you want a real fight on your hands.

What I found most disappointing with RE6 is that most of the emphasis has been placed on action. This is especially evident in the second campaign, but is way overused in the first one as well. There are all these set-piece type battles where you have to defend an area for a certain amount of time, or until waves of enemies have all been killed. This happens a lot, normally in very tight and enclosed rooms where there is no room to maneuver and your only real strategy is to simply shoot or kick for ten minutes and hope for the best. When a nearly-impossible-to-kill boss jumps into the little ten by ten apartment you are stuck in, things go from bad to worse. And your reward for surviving one of these battles is often being thrown right into another one. I think the RE series works best when there are highs and lows. But RE6 likes to crank things up to 11 and keep it there. That’s exciting at first, but you soon get desensitized to the whole thing and dare I say, a bit bored with the experience.

There are also a HUGE amount of those annoying ‘push the right buttons quickly’ type of events. I think this was well balanced in RE4, but is way overused in RE6. Some of them don’t even make sense. In one, I saw a subway train coming from a long way off, so I walked to the side of the tunnel, no where near the tracks. But then at the last second the game prompted me to hit X and O at the same time. I didn’t and was treated to a cut scene where I was back in the middle of the tracks getting squished by the train.

There are too many of those kooky ‘run from the train’ or ‘defend this gas station’ type of moments to give RE6 too high a score for gameplay, but these don’t really drag the title down once you get used to them. Even if they cause your death, you are often automatically started just a few seconds before the event triggers again, so the frustration is minimal. And once you get into the groove, you will probably find yourself playing for hours on end without coming up for air. RE5 certainly couldn’t claim that. Coupled with a strong story and almost four full games worth of content, Resident Evil 6 claws its way back into something respectable and fun to play. It may not be a pure survival horror title anymore, but it’s a good game that will keep you up at night.