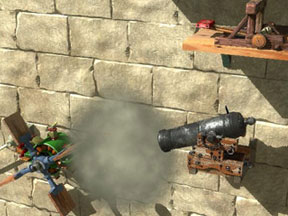 The concept of Crazy Machines 2 has been around for a while. Basically you take Rube Goldberg-like contraptions and fix them when they are not working. Or, you need to construct entire machines involving blimps, rockets, blowtorches, chains, hammers and bowling balls to achieve relatively simple tasks like placing a bottle in a basket or rolling a barrel to the bottom of a hill.

Games like The Incredible Machine and before that Rocky’s Boots followed this concept. But where the original Crazy Machines series really broke new ground was in the way the puzzles were presented. Each component in a new machine was introduced slowly, often times with an entire puzzle of the hundreds that shipped with the game devoted to teaching how a new object, like a balloon or a domino, behaved within the system. As such not only did the game teach both scientific method and cause and effect relationships, but the difficulty ramped up so slowly that nobody really could get lost. This is not to say that the puzzles were not challenging, but at least you knew everything that each piece could do. One of the most fun aspects of the game was finding solutions to puzzles that even the developers did not expect.

As such, it’s not hard to grade Crazy Machines, but it is difficult to put it in a category. One could argue that it’s a puzzle game, an educational title or a simulation. But the fact that almost anyone at any skill level can play it, and in fact playing together is not only fun but encouraged, means that this is a Family game, or a game for the whole family if you prefer.

Crazy Machines 2 is fundamentally the same type of game as the original. The main difference that you will notice right away, besides the much improved user interface, is the fact that everything is in beautiful 3D now. Instead of just thinking about puzzles existing on a flat surface, you can rotate your view around and through puzzles, so that they practically come to life. Given that the game uses real physics, the ability to see and think in 3D is a great addition. Many of the early puzzles can be solved from the default view, which is almost 2D-like given its bird’s eye angle. But the more advanced ones require you to zoom in and get a real sense of the landscape, or at least it makes things a lot easier if you do.

Paramount to a game like this is a good tutorial, and Crazy Machines 2 has about the best one that I have seen. There is a whole series of levels that are part of the tutorial, and they are fully voiced by your mad scientist guide. This takes you through some very small steps, but makes sure you understand how everything works.

Beyond the tutorial, the entire game does a great job of showing you how to do things. There are 120 puzzles in the core game and each of them has a voiced introduction from your guide who explains what your goals are. Many times goals and special objects in the puzzles are circled or highlighted so you are never left unsure as to what you need to accomplish.

I rated the difficulty of CM2 as easy, but this has more to do with how well you are given the goals of each puzzle more so than how easy things are. Some of the puzzles are downright diabolically difficult and had me scratching my head and trying new things for half an hour or more before I got everything to work just right. If you get really stuck, you can get text hints from the game at the cost of some score points, steal a look at a portion of the suggested solution for a big score hit, or surrender all your points for that puzzle and see the entire solution. So there is no chance that you will be ultimately stuck and unable to proceed.

But the real strength of Crazy Machines 2 is that, surprise, this is practically an online game (another possible category it could almost fit into). You can play the entire game offline if you want, but when you install CM2, you can join what amounts to a thriving community of puzzle creators and solvers. This was attempted in the original Crazy Machines to some extent, but you had to go online and find Websites with puzzles that players had uploaded. In CM2, everything is integrated right into the main interface, so playing online is as easy as selecting that option from the menu.

When you are playing online, your score on each puzzle you solve is uploaded to the main server, so you can see at a glance where you compare to others who have been there before. Given that the top ten high scorers always seem to have been able to ace hard puzzles in only a few seconds, my guess is that they played a puzzle over and over again until they got on the list. In any case, you can look at the top ten player’s solutions to see how they did what they did.

Beyond bragging rights, all of the player-created levels are now in one place. If you create an experiment that you think others would love, you can upload it yourself too by pushing one button. And downloading player levels is a snap. Once you give a new downloaded level a once over, you can vote on how well you liked or didn’t like that experiment. With enough votes you could, say, only bother to download levels that got high marks.

The only complaint that I have is that I think there needs to be some type of moderator watching the online repository. A lot of what I downloaded was incomplete or not setup with any goals. Given that this group-gaming concept is pretty new to a lot of people, there is probably a ton of trial and error going on. A lot of the incomplete levels were probably accidentally uploaded before they were finished. And once there, I could not find a way to withdraw them. I was able to find some pretty amazing levels though where it was obvious that the designers put hours of effort into the experiment and even created a back story.

But this brings up one potential danger in terms of the ESRB rating. The online content could be rather above the current E rating. I did not see any evidence of this, but given that players are free to type whatever they want as goals, it’s conceivable that someone might use bad language or an adult theme that kids should not be exposed too. Again I saw no evidence of this, but a standard "content may change with online play" warning would not be out of place.

Given that you are getting over 120 well-designed puzzles with the core game, and a potentially unlimited number from the online area once modders figure out how to construct better puzzles, the $20 price tag of Crazy Machines 2 is an amazing value. We are talking about hours and hours of brain-stretching fun for a value price. You won’t find a better deal in family entertainment.