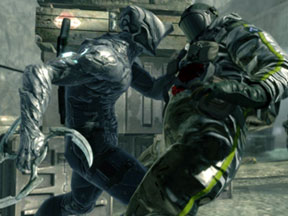 Gears of War was one of the most successful third-person shooters of all time. It took the genre to new heights by incorporating a nearly flawless cover system and combining it with an incredible array of weaponry. Many games since Gears of War have tried to copy its success by taking its proven formula and making slight changes. Dark Sector does just that, but can it hold up?

Dark Sector starts you out as special agent, Hayden Tenno. He has been sent to the fictitious country of Lasria, a former Soviet Bloc nation, to investigate a mysterious outbreak of a virus that is turning people into the living dead. After arriving in Lasria, Hayden is forced to find who is responsible for the outbreak, a man named Mezner. Unfortunately for Hayden, Mezner manages to use one of his minions to infect him with the virus.

For some reason, however, Hayden is not immediately turned into the living dead. Instead, the virus turns Hayden’s right arm into solid metal, while at the same time giving him the ability to summon a glaive, a three-bladed circular weapon that returns to him like a boomerang when thrown. The glaive can be used to do everything from killing enemies at close range, to absorbing fire, electricity, and ice, which are all needed to solve puzzles.

While the glaive is a mighty weapon, it will quickly become apparent to players that it’s not the end-all-be-all. Hayden is still mortal, and as such, bullets still do quite a bit of damage. Just like in Gears of War, players must take cover. Sadly, while Gears of War featured a brilliant cover system, Dark Sector features a cover system that can be very sketchy.

Players will often times find that they are trying to move into cover, but accidentally dive right out into the open. In boss battles, that means that you can kiss your chances of survival goodbye. Another problem that the cover system suffers from is the necessity to stay out in the open to throw the glaive. The glaive can actually be thrown while in cover, and can even blind-fired. However, blind-firing the glaive is almost always a sure-fire way to miss completely. And to effectively aim the glaive, players must take an extra moment or two to peak out of cover and throw it, meaning that you’re a sitting duck.

The game does feature some other weapons in addition to the glaive. Players are able to pick up enemy weapons, and can even throw the glaive to retrieve them from great distances. But, in a very strange choice by the developers, the virus causes any enemy weapon that is picked up to explode in your hands after a short time. Though it does not cause damage to the player, it can be extremely bothersome to have your gun explode in the middle of a firefight.

Fortunately, there are some alternatives to picking up enemy weapons. There are manholes scattered throughout each level that lead to underground shops. While there, players are able to purchase weapons that can be used so long as they have ammo. Also, players are able to customize their guns with upgrades that have been picked up throughout the various levels.

In addition to tearing down enemies, the game also includes a few puzzles. These puzzles primarily consist absorbing an element and throwing it at something, or using the glaive’s slow motion aiming system to hit a specific target. The developers also included a handful of power-ups that the glaive gives the player over time, such as the ability to reflect projectiles. These powers seem to be an afterthought, though, and the novelty quickly wears off.

Although the gameplay in Dark Sector is average at best, good graphics can make people forget about a few technical mishaps. After popping the game in and playing for several minutes, though, it will become apparent where the dark came from in the title. Players will spend as much time trying to see their enemies as they will trying to take them down. Even at intervals when the level takes place out in the open, the game seems to be missing any kind of color.

Despite it’s lack of color, Dark Sector does look good overall. In particular, the glaive is very detailed, especially when absorbing fire, electricity, and ice. Character animation is well done, but almost all of the enemies look the same, so the animations get old very quickly. There are also finishing moves for when enemies step in too close. These moves only require the player to press the melee button, and there is only one animation per enemy.

Dark Sector features decent sounds to complement the graphics. The guns all sound as they should, and the glaive makes a swooshing sound at every throw. Enemies scream when the glaive hits them, and when your health is low, Hayden’s heavy breathing and pounding heart can be heard. The voice acing is also a nice part of the game, and won’t make you want to shut the audio off like some games will.

Though the gameplay, graphics, and sounds are all decent, Dark Sector suffers from a massive problem: no replay value. Even though there are two different online game modes, the online play is so bad that there is no point in even trying it. While playing online, two people at the most can have a glaive, meaning that the game loses the one novelty that makes it worth playing. The online environments are also terrible, with little imagination put in the level designs.

In all, Dark Sector is worth a rent, and is only worth buying if you’re a hardcore fan of the third-person shooter genre. The game had a lot of potential, but needed something more than just a three-bladed weapon to get it through.

It gets 3 GiN Gems out of 5 for being a neat idea with poor execution.