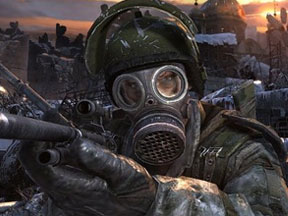 Metro 2033 is a game that will probably scare the hell out of you. There is just something creepy about the subway tunnels running under Moscow. Too bad that’s where everyone lives now.

The year, if you couldn’t guess, is 2033. A nuclear war has obliterated Moscow, making the surface a frozen, poisonous wasteland. But humanity has survived, by retreating into the extensive metro system underground. In fact, an entire generation has been born down there since the war, knowing nothing at all of the surface world. You play one of those kids, Artyom, now a young man with a grave mission thrust upon him.

Life underground is no picnic. For starters, all the stations do not get along, as you will eventually discover when you begin to journey though the system. Some are held by Nazis. Some are ruled with an iron fist by an organization known as The Reds. Some are populated by bandits. And all are besieged by terrible creatures that exist in the no-man’s-land between stations.

You quickly learn that life is hard in the metro. There is food, which mostly consists of mushrooms and pork (somehow people got pigs down there). And there is a society of sorts. You are lucky enough to even have your own room at your home station, which is about the size of a walk-in closet, but at least it’s private, has a nice bed and some little extras.

Trade is by barter, and ammunition is the most important thing you will find. There are even two kinds of ammo. The first is the military grade stuff used for most trading. These shiny rounds are from before the war, so they’re rare. The second kind is the manufactured (or possibly reloaded) bullets made by the residents of the metro. Those homemade bullets are dull in color, and two or more of them (depending on the station exchange rate) can be swapped out for a shiny one, which again, is the default money for most places now. This brings up a bit of a dilemma. The pre-war bullets hit harder when shot, so they kill monsters and people better than the homemade ones. But using the military-grade weapons is literally throwing money at a problem. I mostly tried to stick with the homemade bullets for combat, and used the others for trading, though in some cases, you will want to opt for the better quality rounds.

The game is a shooter to be sure, but there are some real role-playing elements as well. Mostly though, you are kept "on the rails" which are literally rails in this case. Because you are traveling from station to station on your quest, you will pretty much follow the main storyline as the developers have intended without side questing. Thankfully, its one heck of a thrill ride.

The game starts out when it becomes known that mutant attacks are increasing. And a new type of monster is stalking the tunnels. Reports are sketchy, but the creatures have apparently wiped out entire stations on the line. When your station comes under attack, you try to repel it with a friend of yours. Your friend is one of those special people who travel from place to place despite the dangers, and generally is considered an elite soldier since nobody survives long outside of a station. Anyway, your friend gives you a mission to undertake if he does not come back the next day. And sure enough, he doesn’t. So you set off to deliver a message, a warning about a new type of mutant, and get tied up in a struggle to save all of humanity.

You will soon discover that the tunnels hide many secrets, none of them very pleasant. Besides the wolf-like creatures that constantly stalk you, you will also run into lots more creepy things, like ghosts that kill you if you touch them. Thankfully, you can see them in your flashlight beam if you get close enough, but wandering around a dark tunnel trying to sidestep ghosts is nerve wracking. There are also amoeba spores which can kill you. And there are anomalies (did they borrow this from S.T.A.L.K.E.R.) that can fry you if you get too close, or if you try to step through an area with one without timing it just right.

Graphically, the game is amazing. For a series of underground metro stations spewed with filth and the detritus of a barely surviving society, it looks pretty darn good, or I guess I should say realistic. Guns too look all worn and dirty. And they look great when you shoot them. Especially when using homemade ammo, guns kick up a lot of smoke which kind of hangs in the air long after a gun battle has ended. Light sources are all breakable too, which is really nice to see for once in a game. Not only can you creep up and extinguish most lights, but you can also shoot them out if needed.

There’s a stealth interface where your watch tells you how hidden you are, which is why moving in the dark is so important. Once you get silencers and scopes on your weapons (plus some throwing knives), you can become a real killing machine, moving through enemy-held stations like a shadow of death stalking your prey. You don’t have to play like that. You can go in guns blazing and do okay if you’re a good shooter. But I like the sneak and shoot method better, which I was glad to see represented.

You will even get the chance to visit the surface from time to time, where you have to wear your gas mask or be killed in just a few moments. As an example of graphical flair, I got ambushed by mutants and my mask got all cracked and dented up. I could hardly see out the safety glass, though I was glad it held. Eventually I was able to find a new mask and swap it out for my old one, whereupon the view was only filled with a couple scratches. Nice graphical touch there.

The sound is also quite good. The narrator is reading from your character’s diary, and sets the scene before you enter a new area. His voice acting is quite good, and I really started to feel for the situation, and the objective at hand. Guns are loud, as they should be, and ring out in the empty stations. There are also a ton of creepy sounds you will hear in the tunnels, like children crying, footsteps and even distant singing. These are all part of the madness of the tunnels, and if you stop to listen too long to a source of this, it could kill you. Thankfully, the cold meaty paws of the mutants running towards you across the concrete is also quite evident, so it’s rare that you will be truly surprised inside the metro. Outside the winds howl so badly that it’s hard to hear anything at all.

I gave the gameplay rating the lowest score in our GiN Gems chart, though it was still at 4 of 5 gems. The reason for the tick off was because a lot of things happen in the game that are unexplained. In one instance, I kept getting killed over and over again because I didn’t realize that a cut scene that kept intermittently flashing was actually interactive, and the game wanted me walk forward towards a light. In other times, your actual objective is either not all that clear, or spoon fed to you so much that you feel you have little choice but to play along.

For all its amazing qualities, the game does feel a bit linear in nature. You are given freedom of action, and sometimes bullets and other treasures are hidden off the beaten path. But you are still stuck in one place, possibly with one or more scripted events waiting to happen, until you are able to get to a door or gate that lets you load up the next area. You never really stay in one area long enough to really sit back and enjoy the world that was created for the game, and always kind of feel like you are just playing a level and not really interacting with a living, breathing world. And despite a huge metro map, you don’t get to visit even half the stations on it.

Metro 2033 has a pretty in-depth plot that is slowly revealed as you travel. It’s quite interesting actually, if you don’t mind it coming together slowly.

In the end, Metro 2033 could probably be best categorized as a horror survival title, without all the inventory management puzzles. The only things you collect are ammo, med-kits, weapons and filters for your gas mask – or possibly a new mask if yours gets dinged up badly like mine did that one time. There are many moments where you will jump out of your skin, or start spraying bullets like a madman hoping a wave of mutants is nearly as exhausted as you. Metro 2033 is a pretty amazing game, especially from a new Russian developer with their first big title. As a first outing, this is among the best I’ve played. Keep an eye out for other 4A Games in the future, and for more Metro-basted titles as well. If they are this good out of the gate, Metro might just have a long future as a favorite series. And hopefully, the developers will learn how to program for the PS3 as well, so they can go truly multi-platform.

Metro 2033 earns 4.5 GiN Gems for scaring the hell out of me; for making me white knuckle grip my AK as I crept alone in the dark. And it earns high marks for providing a good-looking adventure that is just slightly off center from the norm, which is always a good thing. See you in the tunnels!