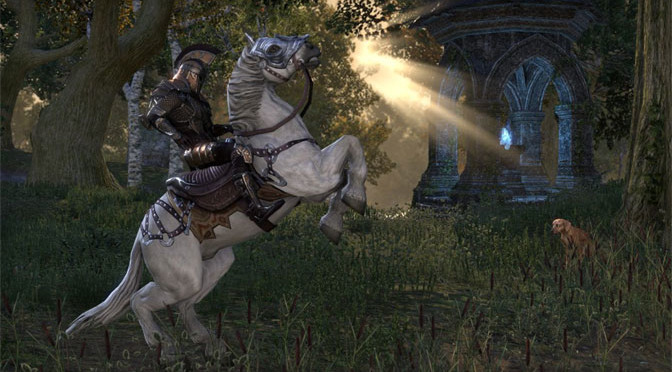 I’ve been a fan of Elder Scrolls since I played Morrowind, and I have loved them all. So I have been following the development of Elder Scrolls Online (ESO) for a long time with some interest and I will admit some trepidation about what they would develop. I was really excited when I got invited to check out the beta. Unfortunately, all of the weekends that it was open were ones where I could only put in a few hours of play time so I did not get a chance to check out a whole lot. So I was very anxious for the game to go live so I could take a deep dive into the game.

I was most excited to see what changes had taken place between when I played the beta and the launch of the game. For the most part, if you played the beta you got a pretty good idea of the final product, but they did fix a couple things that I did not like. The first was pretty critical as the map was not working correctly when I played, but works now. The other thing that I remember not liking was that you were stuck with the first weapon you picked up off the table in the intro prison area and in the game at launch you can pick up a variety of weapons in the intro and if you chose to skip that part you get a couple weapons to start, but you do miss out on some of the other goodies that you might find like lock picks. Enough about the beta, let’s get to the game at launch because that is what we are here to talk about.

I got the ESO Imperial Edition (Digital Download) which for an extra $20 got me a few nice bonus items, the two most important to me were playing as an imperial and getting an imperial white horse (purchase at the stables for 1gp). With any digital purchase of an MMO the download and updates are killer, so I setup my account very late at night and then downloaded the game and began the massive update process before going to bed. So I am not sure how long it actually took, but it was ready the next morning.

When I came back many hours later I thought I would hop right into the game. But even though my game came with a 30 day subscription I had to put in a credit card or game card number before I was allowed to launch the game. Having just spent $80, that rubbed me the wrong way, and seeing that I was already down to 29 days on my subscription even though I technically could not play yet and had only downloaded the game just annoyed me. Luckily that was the last hiccup and I was able to begin playing and all that slipped from my mind and until I sat down to begin exploring.

You get eight character slots to work with and I am just going to run through some of the options. First of all you get to choose male or female for any of the races. The second option is alliance and there is no information on the screen about the three choices other then they change the color background from blue (The Daggerfall Covenant) to yellow (The Aldmeri Dominion) to red (The Ebonheart Pact), you can find out more information at www.elderscrollsonline.com, but you are basically picking your side in the three sided PVP war for control of the world. The three groups each restrict races, though the imperial can join any faction as a bonus perk for buying the enhanced game. I guess I should have read up more closely as I ended up making an Imperial from the Aldmeri Dominion which is comprised of elves and Khajitt trying to restore the Elven domination and to stop the human (i.e. my) dangerous machinations. Though as far as I could tell, my racial choice did not seem to have any impact and I personally liked their starting missions more than the others.

All the races from Morrowind, Oblivion and Skyrim are present and just eye balling the descriptions, they all seem to have the same racial bonuses as the stand alone games. At this point there are only four classes to pick from. They are dragon knight (DPS / Tank), sorcerer (Magic / Summoning), nightblade (Stealth / DPS), and templar (tank / AoE / Healing). I am hopeful that they will expand the options in the future. As with all the Elder Scrolls games, you can extensively configure the look and shape of your character and as with the stand alone games, the skills you use are the ones you can upgrade in the game.

You are never without a quest from the core plot line which runs over 100 hours at this point. I found it to be a nice cross of your typical MMO quests and others you would be more likely to find in Skyrim.

As with the single player games there are the fighter and mages guilds you can join for a line of side quests. Sadly, my favorites the thieves and assassins guilds are not present at this time. There are plenty of other optional quests that add hundreds of hours of additional gameplay. It was kind of weird at first to see other people running around on quests with me, but I got used to it quickly. Especially when some nice soul would run by and attack the guy that was kicking my butt and save me from losing, so I tried to pay it forward when I could.

My favorite weapon from the single player games is the bow, but I found it more challenging in ESO. Physical combat on the other hand is great in ESO. Attack with the left mouse button, and block with the right. Your attacks land where you aim which is a nice change from other MMOs. If you miss, it is partially your own fault, unlike the button mashing MMOs I typically play. I mostly stuck to healing and buff magic so I did not try out a lot of the attack magic. I am not apologetic, it’s my play style from the single player games, and I found myself falling into my same comfortable rut.

For the most part ESO is similar to other MMOs and the stand along games. You gain experience completing quests which let you up your stats and skills. As you gain in skill ranks new options open up. You can see what is in the future and work on specific skills. The difference is that while you are exploring, you can also find skyshards which give you skill points when you find them. It makes exploring for fun and worth it. As I love running around and checking out the sites. That was a big highlight for me, especially when I could find some shards.

Crafting is very interesting, but the lack of options for selling what you make is kind of annoying as I was hoping to find that it would be a way to make some money. As in the stand alone games, there are lots of boxes and containers that you can loot for stuff. You cannot however rob some ones house blind while they are sleeping and sell it all to your fence which is, fingers crossed, something that I would never do in the stand alone games.

You cannot sell the items you pick in boxes, unless you find a recipe and make something such as food or a drink which of course provides some benefit to your character. At the start I picked up everything, but as I continued on I had to become more selective to the crafting areas I had selected to focus on with that character. There are a lot of areas like blacksmith, armorer, food and drink, potions etc…so much so that you really have to focus to become good. The nice thing is you can really choose from all or none with each of the characters you create. Currently there is no auction hall so you are left with player to player trades for the most part.

If you are comparing the graphics to other MMOs the graphics and landscape are good, if you try to make the unrealistic comparison to say Skyrim, you are going to be disappointed. I really enjoyed riding around the world on my horse and exploring. Personally I was never bothered by the voice acting, but it might get old if they don’t make some additions as they add more content as the world expands.

I had a lot of fun playing ESO and I look forward to continuing to play. I think if you are a fan of the stand alone games, this is a game you will really enjoy. They did an excellent job of bridging the gap between the stand alone games and the world of MMOs, and I look forward to seeing what they do as they add more features, options, and quests. There is some content missing that I would really like to see such as the thieves and assassins guilds and I found the lack of an auction house to be strange since every MMO has one. There were also a lot of bugs, but as a long time player of MMOs and of the Elder Scrolls series, I know that when you make something so complicated, finding all the bugs is impossible and that is what patching was made to fix.

Currently ESO is only available for computers, but console options are coming soon and you will be able to port your characters from the computer to the console for free when those games are finished.

ESO in its current form earns a very respectable 4 GiN Gems. As more content is added to the game and the bugs dwindle and disappear, I’m pretty confident that the score will go up. I know I’ll be playing for a very long time, and hope to see you all on the other side.