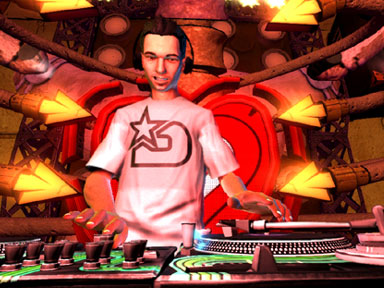 Ok, three Guitar Hero controllers, one Rock Band guitar, two drum sets, and two USB microphones. Let’s face it, I have too many instrument controllers. Now with DJ Hero coming out, am I even going to have enough room for a new turntable controller? Especially one that retails for $120?

While I’m at it, did I want to add another rhythm game to my collection? After all I had both Rock Band titles and most of the Guitar Hero series (with AeroSmith and Rocks the 80s being the only exception.) I completely ignored the lesser known franchises (Ultimate Band and the dreaded Rock Revolution) and am even feeling that the big two are starting to jump the shark.

Although I really enjoyed The Beatles: Rock Band, I have no interest in Lego Rock Band. Same for the Guitar Hero series. While I walked away from GH: Metallica with expectations being exceeded, the setlist in GH5 was a letdown for me and the setlist for Band Hero is making me run for the exits. Just having Taylor Swift as a playable character makes me want to bring out my inner Kanye and say that Guitar Hero World Tour had the greatest in game appearances of all time!

And now we come to DJ Hero. I mean I did DJ based games before"in the form of the original Bemani game Beatmania. It was ok, not really much to brag about in terms of controls. Just press piano keys as they align with a note bar as well as a turntable that functions the same way. Sure the original games allowed freestyle scratching, but that has since been phased out. Even worse, arcade cabinets are rarely seen here; they seem to be based more in California, and aside from importing, only one release was done in the US, and it didn’t fare well due to its insane difficulty.

So being away from the DJ game market for a few years, would DJ Hero bring me back into the mix? At first I felt skeptical; that is, until I played the tutorial and found out that while it featured notes running on a track similar to Beatmania, the control scheme was nowhere near the same. In fact, it’s much better!

Instead of adding notes and effects on a single track, DJ Hero’s gameplay centers on song mixes, or as I prefer to think of them as, mashups. Sure the game’s controls still center on pressing notes that ride down a track, there is more to DJ Hero that makes it feel more like a true DJ simulation.

To start off, in addition to the turntable and note buttons, there is also a crossfader used to switch between the two tracks. While it’s very sensitive, and highly prone to easy mistakes due to not locking too hard to the center, it allows each of the tracks to combine into a unique mix that at times can be better that the tracks if they are played separate.

Of the 93 mixes that are available in the game (which might be the most ever I have seen in a standalone game,) they are taken from an even higher number of master recordings: 103! While I find some of the choices in the game to be questionable at first, when mixed together they sound amazing. Whoever thought that mixing "Ice Ice Baby" by Vanilla Ice with "U Can’t Touch This" by MC Hammer is without a doubt a mad genius. It sounds bad on paper, but in the game, it works! Same can be said for mixing "Intergalactic" by the Beastie Boys with "Rapture" from Blondie.

Also, considering that DJ Hero is a part of the Guitar Hero series, there are also special mixes that can be played with a guitar controller. The strange part is that I actually found these modes to play better than they did in Guitar Hero 5. For one, the sync feels much more accurate to what I’ve been used to (notes that I missed constantly in GH5 now play perfect in DJH) and those dreaded tap notes are finally gone.

Talk about a breath of fresh air, and the mixes are just as great as the standard DJ ones; the best has to be the mashup of "Lapdance" by N.E.R.D. and "The Big Beat" by Billy Squier. While most of the songs were mixed by the in house staff, other mixes were created by many well known DJ’s, including Grandmaster Flash (who also voices the tutorial modes,) DJ Jazzy Jeff, the late DJ AM, DJ Z-Trip, DJ Shadow, and Daft Punk, all of which are also available as in game avatars. Mixes by Cut Chemist and J.Period are also available.

Difficulty is well implemented in DJ Hero. There are 5 levels , ranging from Beginnner to Expert (but only 4 for guitar, eliminating Beginner.) On the turntable side of the, the easy mode centers on just the button pressing with scratching done automatically. Medium adds scratching and crossfading, and hard and expert difficulties add directional based scratching and crossfade spikes (sliding the crossfader to one side and then quickly back into place.

While I spent most of my time playing on Medium difficulty, and was able to score 5 stars on almost all the mixes, jumping to hard lowered my score to between 3 and 4 stars. The challenge is definitely there, and well worthy of replay value, and the best part is, you can’t fail out of songs, meaning anyone can finish a song, no matter what difficulty it’s set to!

Freestyling is also encouraged. While scratching is done with both the green and blue tracks, the red track allows samples to be added. Samples range from simple sound effects and voices all the way up to Flavor Flav’s trademark bits such as "Hit Me" and "Yeaaaaah Boyeeee!" Each sample set is selected in game via an effecter knob located above the crossfader. The effecter knob can also be used to alter the sound of extended track segments to add more variety in your mixes.

Star Power also returns, but this time it’s called Euphoria. A large flashing button next to the effector knob triggers Euphoria when it is unlocked, doubling scores. Another way of building up your score and star rating is to actually rewind the track. By spinning the turntable counterclockwise, the song actually rewinds back to a previous section. By playing the notes correctly, this section’s score can be doubled as well. One problem I had though when rewinding. I had a tendency to break my combo meter while rewinding, and in doing so, I ended up only with a 2X multiplier instead of the planned 8X.

Compared to Guitar Hero 5, multiplayer might seem a bit limited. There is simple DJ battles, DJ co-op and Guitar + DJ co-op. Hopefully since this is the start of a new series, we will eventually get the party play that worked out well in GH5, or even better, implement the DJ capability in the next Guitar Hero title. There is, however, a Party mode where the game plays the notes by itself so you can see the background settings in action, and they are quite a sight to behold. Granted they only run 30 frames per second (similar to GH5,) the detail is stunning.

All the venues and avatars look amazing, and the effects done during performances (including jog/shuttle playback during replays and scratches) are a sight to behold. Daft Punk’s performances alone are worth the price of admission. Their environment is based on the Alive 2007 tour, and at times, the video filter changes into one that looks like it came from the movie Tron. I admit I’ve never seen Daft Punk in concert, but if this the way it ends up for real, I’m getting on StubHub and ordering tickets!

But then again, you might want to hold off on getting those Daft Punk tickets if you plan to buy DJ Hero. The standard package costs $120, which is a bit too expensive for a game, no matter how good it is. A $100 price tag, while still high, might be a bit more accessible. However, for those with fat wallets, there is also a DJ Hero Renegade Edition which includes the game, a premium black turntable controller with gold trim, Jay-Z and Eminem 2 CD set, and a carrying case that doubles as a turntable stand.

Needless to say, DJ Hero is fun; way more fun than I personally expected it to be! I have not enjoyed an original music game this much, going back all the way to the first Guitar Hero. What I thought would have been a simple way to milk the already bulging Guitar Hero franchise turns out to be an amazing original experience (though adding a touch of Guitar Hero goodness) that may end up being one of the best games of the year!

PROS: A new record of 93 mixes/mashups, composed from another record 103 master recordings! Mixes that sound strange on paper actually turned out great (as does the rest of the game!) Playing the turntable is insanely fun. Guitar addition fits the game well. Turntable controller is well crafted and accessible. No failing out of songs!

CONS: $120 might be too high a price, let alone $200 for the Renegade Edition. The crossfader is a bit too sensitive, as is the turntable during Rewinds. Very difficult to full combo a song (so far.) Multiplayer limited compared to Guitar Hero 5.