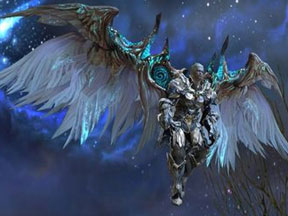 Innovative MMO Will Capture Your Heart

I never thought that I would find myself playing an MMORPG for several hours, on close to a daily basis. Don’t get me wrong, I made sure to not miss exercising at the YMCA three times a week, personal hygiene was not forgotten, and my dietary needs did not include the nutritional wasteland of processed fast food. I made sure my figure did not suffer from my newfound game addiction.

But the main thing that grabs me with any game is the storyline, and this one is so well written and intriguing that DC Comics’ Wildstorm Studios is publishing a limited run comic.

Aion is the God over the world of Atria. Aion created the Drakan to rule over the other creatures that came after, such as humans. The Drakan evolved into the Balaur when they ascended and tapped into powers outside of Aion’s reach to become Dragon Lords. Their lust for power was so great that they became tyrants to everyone living in the sphere.

Aion then ascended the first humans to become the Daevas and twelve were chosen to become the Empyrean Lords. They were the protectors and fought with the Balaur till one fateful day when the Balaur where involved in the shattering of the Tower of Eternity.

The Empyrean Lords banished the Balaur by sealing them inside the Abyss for their crimes. The Tower of Eternity connected the two parts of Atria and when it was torn and the cataclysm occurred, two sections where left. The Asmodians live in the North half in constant darkness because the sun’s light can no longer reach them. The Southern half is where the Elysean lives and is bathed in sunlight which in turn allowed their land to flourish and become fruitful.

They are two enemies who share a common one, the Balaur. Each continent in the game consists of five zones and one capital city. The bases at each end of the tower are left and the two factions discovered entry points into the Abyss. These are the two races you will chose from when starting the game.

Each race has four classes consisting of warrior, scout, mage, and priest. Next is character creation and here you will see how more in depth this goes than previous MMORPG’s cause everything is adjustable. I found myself spending way more time than usual creating characters. I’m usually one to just go with a default so I can jump right into the gameplay.

The graphics in Aion are something to see. They are amazing really. Exploring the world you will see the attention to detail and the design of the landscape while completing quests or just roaming around.

I give the artists that worked on this game a job well done! I wanted to see everything and I’m still working towards that goal.

Quests include a nice feature with the GPS style locator to assist you on where to go to find the items or creatures needed to complete it.

Combat is pretty straight forward, but nowhere near boring (target, attack, and loot) with the main focus being on the skills. Skill manuals are based on levels and give you another reason to grind into the wee hours of the night. You will level pretty quickly, but the more you play and higher level you reach, this will slow. The game makes you really work and put in time for those higher levels.

Now you will all have noticed the really special thing about Aion by now if you’ve been looking at the various screenshots. Aion brings flight to the table.

At level ten you will get your wings, and they are nice! Flight time is limited based on the level of your wings, and yes you can engage in battle while flying. Flying really changes the dynamic of the game and also adds a huge height characteristic to the game that is lacking in most MMOs. Good thing the game looks so good because you can see it from almost any angle.

Crafting is somewhat time consuming, but very easy. It is one aspect of any RPG that I enjoy. Auction houses exist where items can be sold for a small fee, but you can also take a seat and sell your items in your private store.

There are no PvE only servers or zones, but players should not worry. NCsoft created a nice PvPvE environment where the mix is nicely balanced with very little PvP action till you reach level 25 and can enter the Abyss. In this area your legion can take over a fortress or two, but no one faction will run them all. The Balaur will equal out any imbalance.

The character classes are very well balanced so that no one can dominate over all, which is a refresher for me and several of my friends. The one thing that we want to see gone is the gold spamming, which happens frequently in world chat. This issue was addressed by the game masters who are banning spammers every day, but the RMT (real money trading) is still there. They have asked for everyone that views this problem to block the spammer which in turn helps them track these annoying pests down! New chat filters are in the works to help resolve the issue and create a more pleasant gaming environment.

For my vote, this is by far the best MMO of the year! The game has a wonderful storyline, beautiful graphics, very responsive game play, and is worth every penny! The addition of wings to fly and battle while in air makes it one you will not want to miss! Aion is a truly unique experience, and that is not something that comes easily to the world of MMOs.