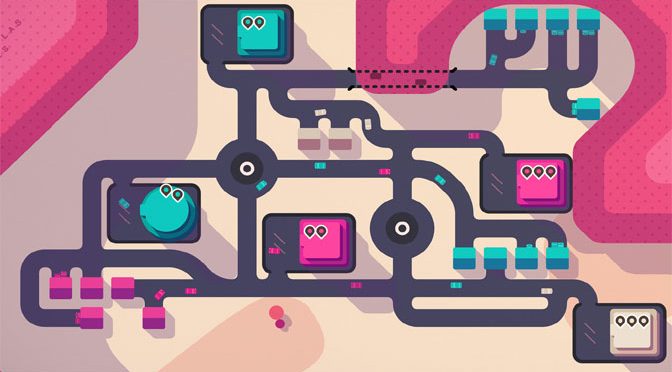 This week’s review is all about cars, and no, I don’t mean the tricked out rides over in Los Santos Tuners. Those are a lot of fun, but this week the vibe is a lot more chill with Mini Motorways, which is available now on Steam. It’s certainly a casual game where you can learn the rules in about five or ten minutes, but one that will take much longer to fully master.

The concept is pretty simple. As you play you will be watching an overhead map of a real city that gradually expands to open up new areas. It’s supposedly accurate, but greatly simplified for the game. Your job is to build road networks so that cars in the city can get from place to place. As you play, one of two types of buildings will pop up, small single family homes and larger office or commercial buildings. You just need to build the roads that will allow people to drive between them. 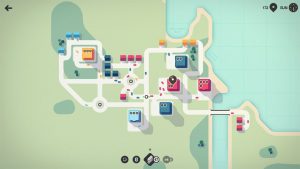 It’s a bit more complicated than that, but not by much. Both the larger buildings and the little homes are color coded, and the cars only move between buildings of the same color. A light blue house will spawn a car of the same color, which will then only drive to similarly colored commercial buildings. A blue car will never visit a red or a yellow building, except maybe to pass through the parking lot in route to their actual destination. Cars will leave their homes and proceed to the appropriate commercial building, sit in the parking lot for a few seconds, and then head back home.

The challenge is that the roads running between houses and commercial buildings of different colors begin to overlap as buildings get slowly placed randomly all over the city. So you tend to get traffic jams at intersections or anywhere else when the roads serving one type of driver are shared with another. It’s unavoidable because you only have a limited number of tiles to work with to build your roads, although your piles do get refreshed at the end of each week of game time. 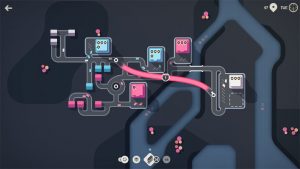 The traffic jams wouldn’t matter so much except for the fact that the commercial buildings generate “pins” to simulate interest which are later removed when the right color car pulls into their parking lot. If you get too many unanswered pins sitting on a building then a timer will start. If the timer reaches zero before a correct color car can visit, then the game ends. So you have to make your road network as efficient as possible and avoid gridlock at all costs. Large traffic jams will quickly end your game. 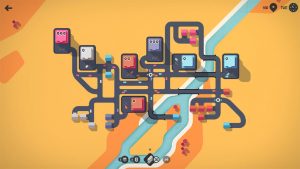 Thankfully, you have several advanced tools to help keep the cars flowing in addition to just the generic road tiles. Bridge pieces will let you place a road across the water, like over the rivers that run though most cities in this game. You can also put in traffic circles or street lights to boost throughput at popular intersections. Meanwhile, interstates basically allow you to almost cheat by constructing a road that goes overtop all the others and makes a strategic bypass. So if you are having trouble getting red cars from a cluster of houses on one end of town to a business on the other, then adding an interstate bridge will let them travel there directly while avoiding any gridlock in the town below. 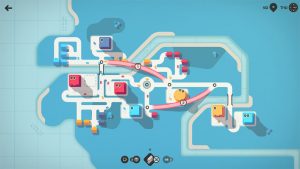 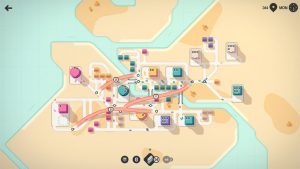 In my experience, the interstate is the most powerful tool in your arsenal since it lets you bypass trouble spots and move people directly to businesses. Traffic circles are good too because it generally lets cars pass through an intersection without stopping. The only problem with traffic circles is that it’s hard to place them into good places when the city is already built out, which is a problem because you generally don’t start with any. Traffic lights are okay, but I’ve seen them almost make traffic jams worse in some cases, especially in complex intersections where lots of roads come together.

There are no voices in the game, but Mini Motorways does play some chill music for you while you play. That helps to foster a relaxing atmosphere, at least until the late stages of a game when your city starts to fall apart. 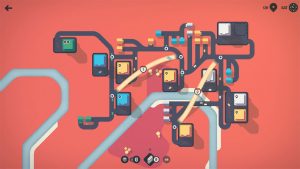 Developer Dinosaur Polo Club even supports their game by creating both daily and weekly challenges. These are generally slightly harder scenarios with harder rules, like not being able to cut down any trees to make room for roads, or only having access to one bypass for the entire game. My only wish is that they would make it so that players could create custom games, adding or subtracting rules to make a level that they really like, or find especially challenging. The other thing would be a free-play mode, where players could just chill out and build up their city without the threat of a gridlock game over hanging over their heads. 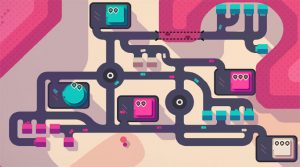 Mini Motorways is an unexpectedly deep strategy game with a very simple set of rules and interface. Games can be played in just a few minutes, and on pretty much any computer hardware. If you are looking for a nice way to get a quick strategy game completed on the go, then give Mini Motorways a spin. You might be surprised how much you enjoy the experience.