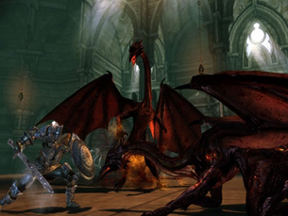 The Dragon Age series is known for a lot of things: amazing character depth, a complex back story, seemingly endless questing, great graphics, voice acting, and for most people – fun. But it’s also known for something else: DLC. Even in the core game, there are offers made to players (from within the game) to buy new downloaded content. Some of these DLC packs like The Stone Prisoner lead to good adventuring and new powerful characters who can join your group, while others like Warden’s Peak may leave you feeling a touch cheated at the end.

A lot has been made of the Witch Hunt DLC, where GiN favorite actress Claudia Black’s character can be chased into the fade. Unfortunately that DLC doesn’t really answer the questions we wanted to know, though it was nice to see our not-so-good-witch of the West again.

For this review, we wanted to concentrate on Dragon Age: Awakening, which is both a DLC and stand-alone game. Unlike most of the DLCs within the core game, this one is actually a full campaign and isn’t over in an hour or two of gaming. It’s not as long as the main game, but you can expect at least eight to 10 hours of play. If you do all the side and companion quests, it could take a bit longer.

You can create an entirely new Gray Warden character, or bring your character over from Dragon Age: Origins. I imported my character because he was a hugely powerful mage with more spells than hotkeys, but you can build out a tough character with a lot of skill points if you are starting from scratch.

In terms of logistics for the story, Bioware had to come up with a way for the Gray Wardens to be relevant so soon after ending a blight. Given that blights only happen once every couple hundred years, it would not make sense if you were fighting a new one only a couple months after the last arch-demon was killed. I’m not sure what is planned for Dragon Age II in March, but for Awakening, we find our Warden in charge of his own Arling. The Wardens are normally non-political and only concerned with blights. Having one run the equivalent of a small country is a big deal. If you do well, it’s implied that the Wardens may be able to grab some real power in the world. If you fail, well, it will make all Wardens look incapable of doing anything other than killing darkspawn, which makes them kind of worthless in those hundred year stretches between blights. Given how weak your order was before the blight in Origins, this could be a way to avoid that in the future by maintaining a permanent power base.

As the leader of the land, you will be expected to make some very difficult decisions about how to rule. You’ll even hold court where life and death will be decided, with consequences no matter which way you rule. And you will have to decide how to deploy your army, how much to spend on defending your keep, and what types of gear your soldiers will have access to on the battlefield. Other events will sometimes trigger as well, like food riots, where you will have to decide if you are going to be a velvet glove or an iron fist type of magistrate.

But it’s not all stuffy meeting rooms. There are five major areas to explore in the game, all very different from one another and most of them focused on the combat we have come to expect in Dragon Age. You have a capital city, a dense forest, an underground city, a spooky swamp that is quite atmospheric and the final confrontation area. The main quest will lead you to each of these places, but there are many side quests to follow once you get to them. Some of them are quite humorous.

You will run into characters from the main game you know, though only the drunk dwarf Oghren will actually join your party. You can even make him a Grey Warden. The new characters you meet all have their own back stories that can be explored in true DA style, and most of them will become wardens too. One character in particular is extremely interesting, and you will be surprised when you dig him up, that’s for sure.

Although there is no blight, because there is no arch-demon, the darkspawn are acting like there is one. They didn’t retreat back into the deep roads when the demon fell at the end of Origins. Instead, they stayed on the surface and gathered into war bands that terrorize the countryside. As you play Awakening, you will even find darkspawn with the ability to speak. Two main leaders of the darkspawn will be revealed, and there are quite a few surprises about their origins, and even how they relate to each other.

The end of the game gives you the option to apparently finish the blights for all time. I’m not sure if this is a prelude to Dragon Age II, or if they will simply ignore the apparent new canon that is being written. I would hope that what happens in Awakening will at least be a part of DAII.

The one complaint I have with the game is that the codex remains a little bugged. It tells you at one point that people you know are dead, and that a certain important building has been destroyed. But in the closing credits, when we learn what happened to everyone, we suddenly find out that everyone is okay and that building we thought was destroyed actually held out. I suppose it could have been meant as a surprise, having you think your friends are dead, only to find out that they are okay. But if that is the case, it’s not done very well. Then again, even in the core game, the codex tended to write the wrong history from time to time.

In the end, this is a great DLC. For a fraction of the cost of a full game, you get what is really a complete title. Of course you can really appreciate it more, and all the inside jokes, if you have played Origins, but you don’t need to, and that’s the best way to put out a DLC. Awakening scores very highly for value. You pay very little, but get a whole lot. Now if March 2011 would only get here a little sooner.